Five car accessories that cost more than a used car

These expensive car accessories cost more than a used car!

Car accessories on high-end and luxury vehicles can quickly add up to the value of a used car! These optional extras are surprising. See what you could buy instead of splashing out on a $300,000 dash clock or a $9,300 reversing camera!

Confused as to whether you even need to tick the option on a new car purchase? View our new car accessory: Is it worth it? guide.

The Porsche 918 is a natural attention-grabber no matter what paint job you go with, which makes the $63,000 silver or chrome liquid metal option a fantastically expensive form of self-indulgence.

Odds are nobody but you and other Porsche enthusiasts will recognise it as “the good” paint, which makes it a great car accessory for those who really want a Porsche 918, but have a personal rule to never spend less than $900,000 on a car.

Cars you could get instead: For $63,000 you could choose from a range of new consumer SUVs and still have money left over. 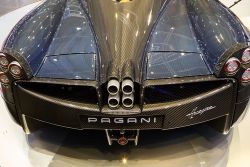 While you’re at it, consider choosing the $20,000 luggage set option, or paying another $10,800 for “premium leather”. The car itself costs over $1.4 million, but apparently Pagani only breaks out the nice leather for customers who pay another 10 grand on top of that.

Cars you could get instead: Take your pick. $153,000 will get you almost any standard consumer vehicle, or a new house if you’d prefer.

With 20/20 hindsight you might regret paying almost $10,000 for a reverse camera. Or perhaps not, when it’s installed on the Lamborghini Aventador V12 which carries a total price tag of at least $750,000.

The annual cost of performance car insurance for monsters like this can sometimes run into five figures, and car accessories such as reverse cameras will pay for themselves in the long run, even at exorbitant costs like this.

Cars you could get instead: There are countless used cars on the market for under $10,000. 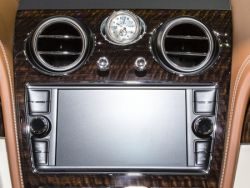 Dashboard clock in the Bentley Bentayga

The $450,000 Bentley Bentayga is touted as the fastest SUV in the world. If you don’t believe it, buy one, then time your trip with the standard built-in car clock and see for yourself. If you still don’t believe it, upgrade to the $300,000 diamond-studded Breitling car clock and try again. It won’t measure time any more accurately, but this way you’ll at least be getting some use out of it. This is surely one of the most expensive car accessories on the planet, ever!

Half a million dollars might seem like a high price for bedazzling your dashboard, but it’s worth remembering that you’re getting so much more than gold and precious stones. You’re also getting a fully functional timepiece.

Cars you could get instead: What’s your favourite supercar brand? Forget this pricey optional extra, get one of those instead!

The 2012 Infiniti QX56 was a bit of a behemoth, so a Blind Spot Warning System was highly recommended. All you needed was a $3,000 Technology Package. Unfortunately, it involved buying into a Russian doll of nested optional car accessories.

First you needed the Theatre package, which unlocked the Tyre and Wheel package, which in turn let you get the Deluxe Touring package which, finally, allowed buyers to go for the Technology package. In the end, that seemingly-basic option cost you $12,750. The good news was the heap of extra equipment, though you didn't really ask for them.

Whether or not an optional extra is value for money depends on the person behind the wheel. If you wouldn’t even consider driving a car without a diamond-studded steering wheel, then it’s absolutely worth looking for that option.

Before you buy a car, it's a good idea to choose your desired extras so you aren’t caught off guard by the dealer. Remeber to decide on either a car loan or dealer financing ahead of time, so you know what the plan is going in.

Uber moves further towards artificial intelligence Why was my car loan application rejected?