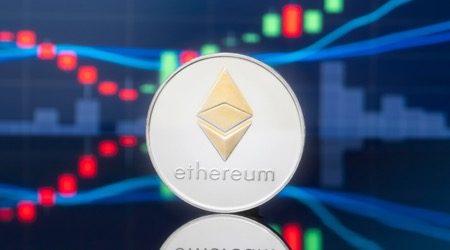 Ether has lost about 3% from its value over the last week as trading volumes remain subdued.

For most of the last seven days, Ether has traded within the same band, between $450 and $480. There was a period of about 48 hours when the price sat between $480 and $500, but the price dipped below the $480 resistance level again today.

Trading volumes peaked at about $1.8 billion over a 24-hour period before dipping to around $1.2 billion. Those levels are quite low and reflect what we've seen with other cryptocurrencies. Prices might be relatively steady at the moment but trading volumes are down, indicating traders are, for the most part, keeping their powder dry and not executing large trades.

Two weeks ago, we saw 24-hour volumes peak at almost $4.6 billion. We're a long way from those levels.

Based on the last couple of weeks, Ether looks to be finding support at around $460 but meeting resistance at $474. Consequently, it's trading in a narrow band much of the time, with the occasional short-term breakout. And while the price did breach $500 for a moment, it fell back quickly to that support level.

That $500 level is attracting the sellers according to FXStreet. But a published article at the same site suggests ETH is in a rising wedge, suggesting there is some chance of a price breakout.

However, a fall that holds the price below $475 could signal a sharper, further decline according to NewsBTC. That looks like a distinct possibility after today's fall of almost 5%, which has the price currently sitting at $463. If the price stays here, we can expect further falls.

What's worrying is that most of the market took a big hit today and the gains made over the last week have been erased and, in some cases, reversed. That suggests there's still a lack of overall confidence in the market as almost every major coin moves in unison. Whether today signals another fall, like the one we saw over most of June, or just a small correction in an overall upward movement will become clearer over the coming days.