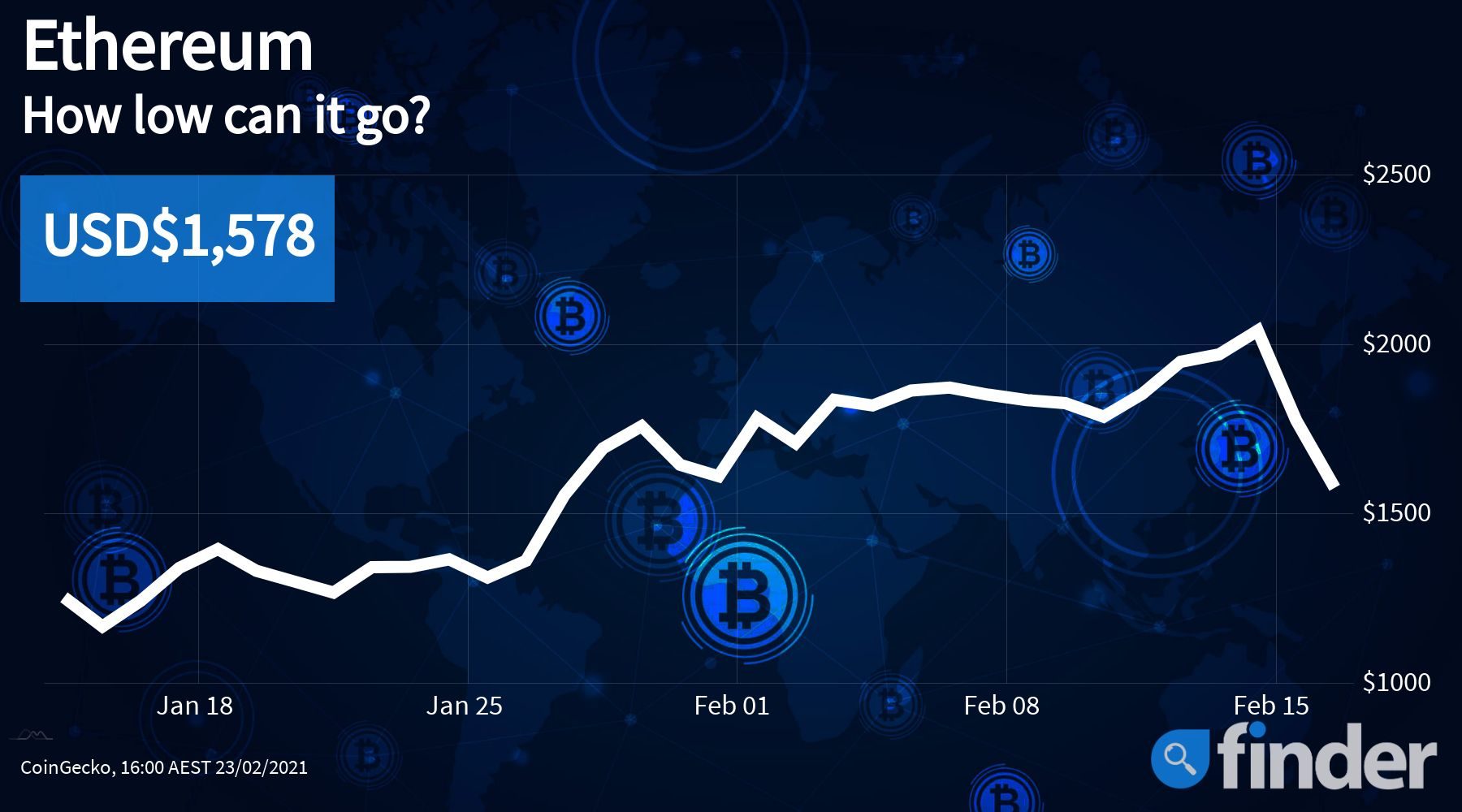 Ether drops from $1,900 to $1,578 amidst a market-wide sell-off, following record-breaking high prices.

Ethereum has been on the receiving end of a lot of turbulence over the last 48 hours, with the currency's price dropping by approximately 21% after it hit a new all-time high of $2,038 on 20 February. At press time, the second-largest cryptocurrency by market capitalisation is sitting at $1,578.

Over the course of the same time period, $25M worth of DeFi loans were liquidated as ETH gas fee rates soared to an all-time high of $29 per basic transaction, thereby highlighting the platform's ever-increasing scalability issues. This has also resulted in many high-profile platforms – such as Harvest – seeking out other EVM-compatible options such as the Binance Smart Chain (BSC). Not only that, as a result of the above-stated drop, the total value locked (TVL) across the DeFi ecosystem has dipped by $1.3+ billion.

Lastly, it bears mentioning that the currency's ongoing price action, by and large, is being driven by three core factors: decentralised finance (DeFi); Ethereum 2.0 staking; and the launch of ETH-centric futures on the world's largest derivatives exchange, the Chicago Mercantile Exchange (CME).

How to buy Ether

The experts weigh in

To gain a better understanding as to where Ether might be heading, Finder spoke with Pankaj Balani, CEO of cryptocurrency exchange Delta, who believes that the digital asset has been consolidating around the $1,800 levels for some time now and that a new breakout seems imminent.

In his view, there is a good chance that ETH may be propelled to between the $2,000-$2,400 levels sometime soon; however, gas fee problems continue to be a clear entry barrier for many potential market participants. Balani added:

"As the price of ETH goes up and there is more activity on the chain, the issue only tends to compound. It does not seem like there's any quick fix available at the moment until the EIP-1559 rolls out or any of the L2 solutions gain traction."

A similar sentiment is shared by Matvey Voytov, head of marketing for Waves Enterprise, who is of the strong opinion that ETH will be able to once again hit the $2k mark soon, following which, it will consolidate and break the all-important psychological barrier for good. That being said, he is quite unsure of what lies in store for the asset in the mid-term as there exist a number of clear issues with the Ethereum network (such as rising transaction costs and performance hangups).

On the subject, he further opined that if the Ether dev team is not able to evolve and solve its escalating gas and scalability issues by the end of this year, it will be replaced by a number of competitors – such as Polkadot, Avalanche, etc – that have been breathing down its neck for quite some time now. Voytov added: "Current DeFi capitalisation is obviously concentrated exclusively on Ethereum these days but with the development of interoperability features, it can end pretty fast."

Ethereum lags behind rivals with ETH2

The proof-of-stake (PoS) model, which essentially provides blockchain networks with a way through which they can achieve community consensus, has been around since 2012. However, it's only over the last twelve months or so that a lot of people have been talking about "staking", thanks in large part due to the launch of high-profile platforms including Ethereum 2.0, Polkadot and Cardano.

That being said, it bears mentioning that even though the concept of "staking" is by and large associated with ETH2.0, Ether is far from being the world's number one staked cryptocurrency. In this regard, one of the core reasons as to why a lot of individuals are reluctant to stake Ethereum is that the entry barrier is quite high with there being no real quick exit strategy in place in case sudden price movements are witnessed.

To further elaborate on this point, one can see that in order to become a validator on ETH2.0, investors have to lock away a sizeable sum of 32 ETH, currently worth around $60,000. These funds, once invested, are pretty much cemented into the Ethereum ecosystem for the long haul as it is not possible to un-stake or transfer these funds out of the platform before subsequent upgrades go live.

Lastly, it bears mentioning that many other platforms, such as Polkadot and Cardano, offer a longevity advantage over ETH2 (which has been live for just over 60 days). Polkadot and Cardano have been fully functional and active for more than six months at this point.

While DeFi has been grabbing a bulk of the headlines over the last many months, the recent wave of institutional as well as retail investor inflows into the cryptocurrency market has allowed many exchange tokens to perform exceedingly well. This is in large part due to the fact that many exchanges require users to employ their native token offerings for a variety of different reasons such as settlements, funding of new listings and token buybacks.

On the subject, one can see that over the course of the last week alone, Binance Coin (BnB) has more than doubled in value, climbing from $130 to over $290 within a span of just 5 days or so. Other similar tokens that have been on the receiving end of such solid price action include FTT (the native cryptocurrency of cryptocurrency exchange FTX) and KSC (which is affiliated with trading platform KuCoin).