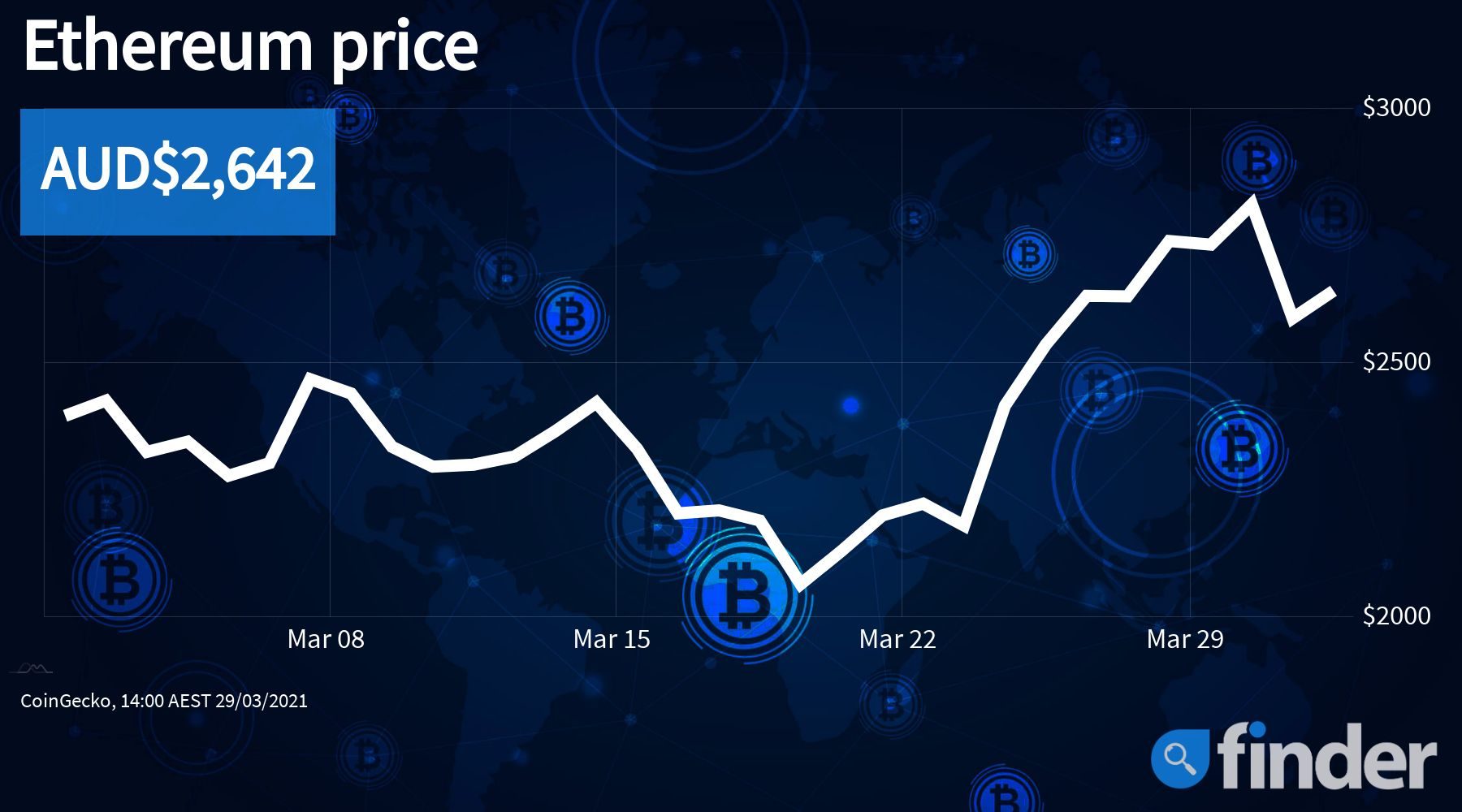 ETH's value dipped by 5+% yesterday, but despite this, the currency is still showcasing weekly gains of around 4%.

Despite the cryptocurrency market as a whole being faced with a fair amount of negative action over the last 24-hour trade cycle, Ether has been able to hold strong, with the premier altcoin still continuing to hover around the AUD$2,625 threshold after reaching its all-time high of AUD$2,825 recently. At press time, ETH was trading at AUD$2,600.

Thanks to Ether's recent ascent, the total capitalisation of the cryptocurrency market rose above the US$2 trillion mark for the first time ever. To put things into perspective, the value of the digital asset sector has risen from US$1 trillion to US$2 trillion within a couple of months, with this meteoric rise being spurred primarily by Ether and Bitcoin.

To get a better sense of where ETH may be headed in the short term, Finder spoke with Sidharth Sogani, founder and CEO of blockchain analytics provider CREBACO Inc. In his view, the recent negative publicity surrounding the altcoin, especially regarding rising gas fees and network congestion, will most likely not have a negative impact on the currency's financial outlook, adding:

"I don't think negative attention is impacting ETH prices directly. The network is too big now to get any hits from such publicity. In fact, according to me, Ether is undervalued. It is running the Token, DEFI, and NFT markets single-handedly. Over 95% of the market is with Ethereum. I see it hit AUD$9,850 in the next 6 to 8 months."

He further opined that as we move into the future, Ether will continue to showcase an increasing amount of stability, probably settling down around the AUD$2,560. "The future is good, EIP 1559 will make the network more efficient. POS will make it achieve new heights," he closed out by saying.

Similarly, providing his take on the matter, Stephane Laurent Villedieu, chief marketing officer for blockchain tech firm RioDeFi, told Finder that even though over the past few months a number of blockchain networks such as BSC and Solana have gained a lot of attention, Ethereum benefits from a number of competitive advantages that ensure its supremacy as a dApp platform at least in the short term. These include:

Over the course of the last 90-odd days, the Non-Fungible Token (NFT) market has surged tremendously, with an increasing number of celebrities jumping on board the hype train so as to digitise their various creations as well as gain more crypto exposure.

That being said, what is interesting to note here is that since the NFT market is largely built atop the Ethereum network, it has helped the latter gain a lot of mainstream visibility as well as garner more investor demand.

For example, recently, billionaire investor and owner of the NBA franchise Dallas Mavericks spoke out in support of Ether, claiming that it is the closest thing we have to a true currency within the digital asset space. Not only that, he also revealed that he owns substantial sums of the premium altcoin.

Similarly, just last month, Hong Kong-based tech firm Meitu also announced that it had acquired substantial sums of the digital currency, purchasing a total of AUD$29 million worth of Ether, making it one of the first institutional players (along with Grayscale) to go long on the currency.

The NFT craze rages on

On 7 April, American football superstar and six-time Super Bowl champion Tom Brady announced that he will be launching his own NFT platform. Dubbed "Autograph", the project will look to rope in some of the world's biggest entertainers, sports personalities and fashion icons to sell their personalised collectibles. The offering is expected to go live sometime during spring.

Similarly, a number of other NFT platforms and marketplaces have also sprung up in recent times. For example, the Winklevoss brothers, owners of the American cryptocurrency exchange Gemini, released a platform called Nifty. Similar moves were also made by prominent Indian cryptocurrency trading platform "WazirX", hardware wallet manufacturer Ledger, and Crypto.com.