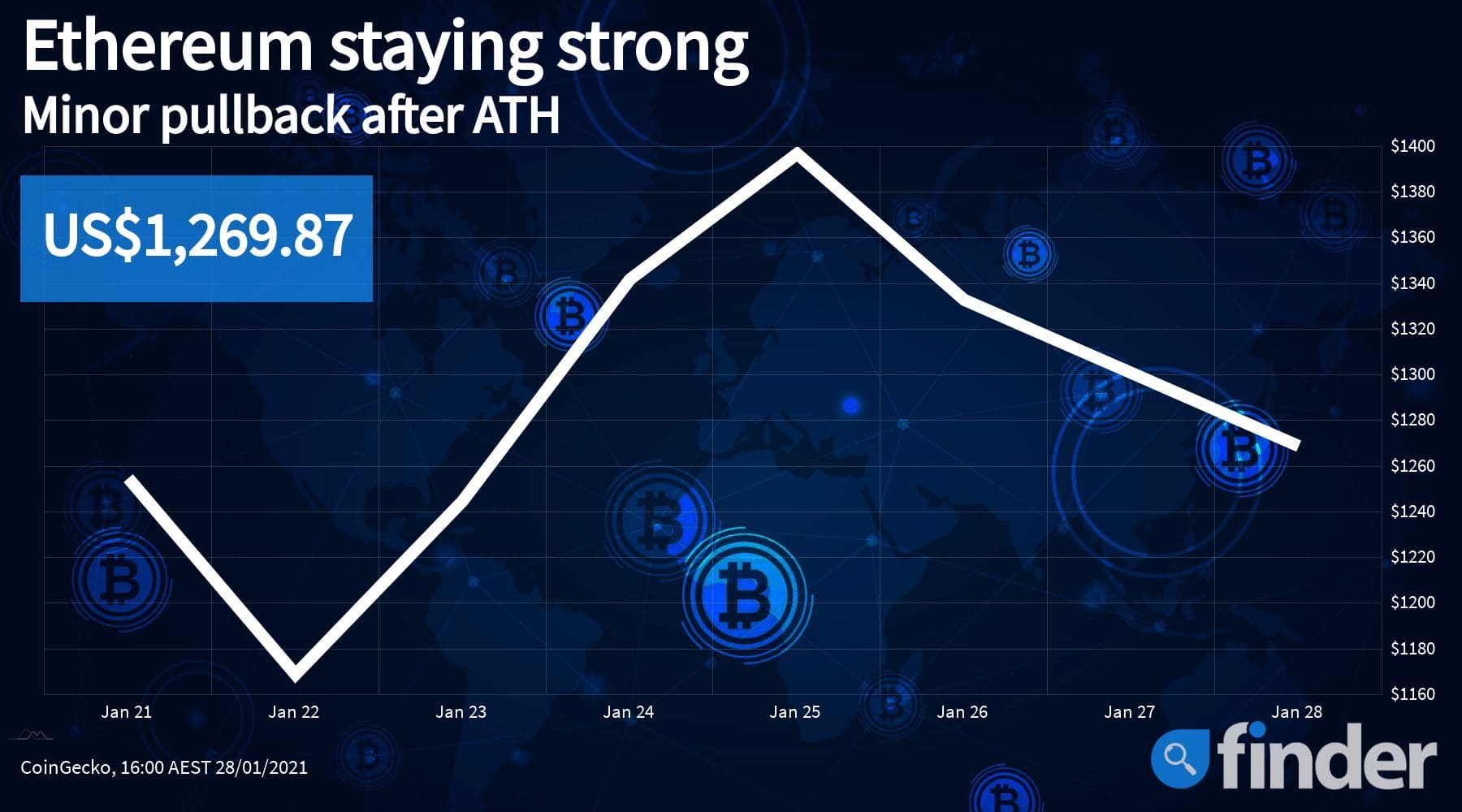 After sitting tight around the US$1,350 range for a couple of days running, Ether, the second-largest cryptocurrency by total market capitalisation, proceeded to plunge to as low as US$1,218 yesterday. However, this dip was followed by a series of financial ebbs and flows, with the currency now hovering around the US$1,280 mark.

This latest price swing has come in the wake of a sudden downward trend that has seen each and every top-10 crypto project, barring stablecoin Tether (USDT), experience some sort of monetary pullback. In this regard, it bears mentioning that over the course of the last 24 hours, the market capitalisation of the cryptocurrency sector as a whole has dipped by a whopping 6%, which translates to roughly $52 billion.

A possible explanation for this across-the-board slippage could be the Federal Reserve's move to leave interest rates unchanged around the near-zero percent mark in an upcoming announcement – primarily in an effort to boost liquidity, thus allowing the dollar to exhibit strong technicals, at least for the time being.

However, despite all this, it is quite clear that the global economy's condition can no longer be hidden using the Fed's band-aid approach, as Wednesday saw Wall Street suffer its sharpest daily decline in months, with the S&P 500 and the Nasdaq Composite indexes falling by nearly 3% and the Dow Jones Industrial falling by 2%.

Even though Ethereum's value seems to be on the decline, Coinmetrics data suggests that the premium altcoin's realised capitalisation has increased by nearly 50% (over January 2021), thus hitting new all-time highs of around $70 billion. To put things into perspective, ETH's realised cap has increased 3x since March 2020, which is especially impressive since the period was also marred by economic devastation caused by the coronavirus pandemic. For those unaware, the "realised cap" metric essentially seeks to calculate the value of a digital currency's supply as per when each of its units last moved on-chain. To put it even more simply, the indicator looks to estimate the price of each ETH that is currently available in circulation as opposed to simply multiplying the current price of a coin with its total supply (as is done to calculate a currency's total market cap value).

Providing her thoughts on Ether's future monetary outlook, Marie Tatibouet, CMO for cryptocurrency exchange Gate.io, told Finder that in spite of the aforementioned price swings, activity across the ETH network has been exploding with the number of ETH holders also increasing significantly over the last few weeks. She added:

"The currency is still bullish sentiment despite the recent dip. BTC rally, Ethereum's scalability problems, and high gas fees (still $17) are potentially the factors behind this? The price is set for a temporary correction and will probably break below the $1,200 psychological level."

Tatibouet highlighted that Ethereum is still backed by very strong fundamentals and on-chain analytics alluding to Santiment's recent report which revealed that the number of ETH stored in exchange addresses as well as with whales has dipped by a significant amount. "This shows that the big shots are not interested in selling their ETH any time soon," she added.

What can we expect in the short-to-mid term?

To gain a better understanding of where Ether might be heading price-wise, Bohdan Prylepa, chief technical officer for BTCU, told Finder that a lot of capital has come into the crypto market – primarily Bitcoin – over the last year or so, most of which is now seeping into the altcoin realm, as a result, even though it may seem like the crypto ecosystem as a whole may be facing some corrections, the future of the industry still looks good, adding:

"I believe Ethereum is likely to rise above $2,500 by the end of this year. Let's make analogies with Bitcoin, which has doubled its previous record as a result of institutional investor interest. Now, against the backdrop of all of the above, Ethereum has begun to attract investors' attention. Thus, we can confidently expect the cryptocurrency to grow if the bullish scenario is not changed in the opposite direction by very strong events that we do not know about yet."

A similar outlook is shared by Tatibouet, who is of the opinion that after recovering from this "temporary hiccup", there is no doubt in her mind that ETH will surge past the $2,000 level with ease, especially as the DeFi ecosystem continues to accrue value and become more diversified than ever before.