The Ethereum gaming business might show the future of the industry How do you give gamers a real sense of accomplishment? You let them play for profit.

There's no shortage of cryptocurrencies aiming at the online gaming space. Some approach the industry with hard-nosed business plans, while others seem to just tack "gaming currency" onto their roadmap to look busy.

And others still were built on the blockchain and have already grown into multimillion-dollar-equivalent enterprises without setting foot in the real world.

What they all have in common

One thing they all have in common is the potential for players to profit. With the exception of Etheroll, which is sheer gambling, all the most popular games involve elements of collectability and being able to resell one's digital assets at a higher price and to potentially make money by playing a game. At the same time, there's enough money involved for developers to take a fairly sizable cut of the profits.

Gamers have been profiting from games ever since someone realised that others would happily pay real money for digital in-game assets. And developers have been realising that without deliberate management of this mechanic, black markets will quickly spring up.

And as the top Ethereum games show, profit-sharing mechanics between developers and players might be a surprisingly viable model. Large developers have realised that there's a lot of money to be made by having in-game gambling, loot boxes and other items for sale, but it has also become a source of friction between gamers and developers.

There might be a sweet spot for developers, where letting your players earn just enough money can pay for itself.

Meet the top games below.

Etheroll is a simple gambling application that has turned over 6,000 ETH during the last week, with developers most likely pocketing a total of about 30 ETH (about $25,000) for themselves in that period based on the house odds.

Etheroll is a very simple game. You pick a number and digitally roll a 100-sided die. If the die's number is lower than your number, you win. And that's the entire game.

The brilliance lies in its complete transparency. The house has a 1% edge, the outcome of each roll is truly random and you can place bets by choosing your exact chance of winning. There are no casino mind games here. Players simply put money into it and statistically get exactly 1% less back.

Because it's all open source, you can even check the programming for yourself to see exactly how it works.

It's not complicated. Or is it?

CryptoCountries is the most popular of the collectible-type Ethereum games. You can buy countries with ETH and get your lordship of the land recognised on an interactive world map, where the countries colour will change to the HEX colour of the last six digits of your wallet address.

Each country is essentially a coin in its own right, purchasable with ETH. But every time it's purchased, the cost will increase. Anyone can buy a country whenever they want, but they'll have to pay more for it than the previous person did. You might be sad to see your country go, but at least you sold it at a profit.

The price increase per handover depends on the current price range and caps out at 15%. The game developers take a cut of the profits ranging from 5% to 2% per transaction depending on the country's price tier.

Over 1,000 ETH has been spent on these countries over the last week, so at the most conservative possible estimate, the developers have made about 20 ETH from the game in the last 7 days. 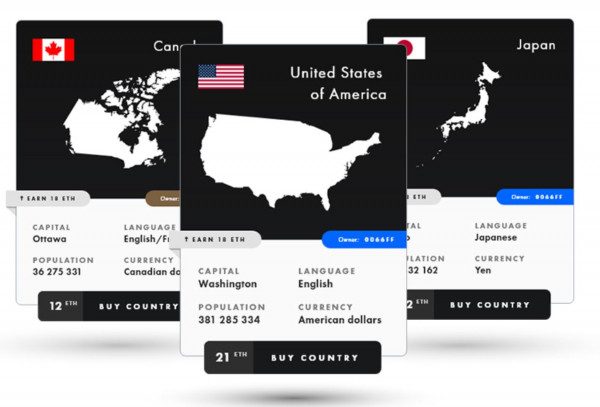 It's basically like the above. Just substitute countries for celebrities and change the weekly turnover to 1,400 ETH.

Users spent 165 ETH on Etherbots robot parts in the last 7 days, and over 60 ETH in the last 24 hours alone, with a recent surge of popularity as it entered the prelaunch stage.

Robot parts are bought and sold on the Ethereum blockchain, which can be assembled to form over 2 million unique robot combinations. The parts are priced according to rarity, and the rarity can be transparently demonstrated through the smart contract so users can be confident that the price of each item is fair.

Or as fair as the cost of digital robot parts will ever be.

Does the robot unicorn go best with the trident or the flamethrower?

This game achieved notoriety after becoming too popular for Ethereum's own good. At its peak, the cats made up a significant portion of Ethereum network traffic, driving up its fees and congesting it to a halt.

Since its launch in November, players have spent about US$20 million equivalent on cats. Players purchase, breed and collect cats, whose exact pedigree – and very existence – is a matter of public blockchain record.

Kittens are only available on the marketplace, so new players can only buy them with ETH. Once players have two, they can breed them and sell the offspring for a profit or just keep collecting kittens and holding them in their wallets. Just as nature intended.

Disclosure: At the time of writing the author holds ETH, IOTA, ICX, VEN and XLM