Espresso Display V2 Touch review: So good you can touch it Where to buy
Buy at Espresso

Dual display set-ups are a thing of beauty. Lots of people had them in their offices in The Before times. But when we pivoted to working from home and hybrid work, we had to leave them behind. There are lots of options for immobile second monitors, and even some really good portable ones at almost half the price of this one, but the Espresso Display V2 Touch has enough extra features to make it really stand out from the crowd.

The Espresso Display V2, as the name suggests, improves upon the original Kickstarted Espresso Display which reviews at the time called "good, not great" and relied on unreliable third-party software to bring touch features to the Mac. The V2 comes with a slew of internal upgrades, a body that's a whisper thinner, and first-party touch screen software for a better experience. The most striking thing about the Espresso Display V2 is how thin it is: 5.3mm to be exact. It makes it easy to fit into a backpack alongside a laptop, or fit in on a desk, on a hotel table or couch. It's also super light, 865g, adding to that portability.

Importantly, it looks super sleek, with dark grey brushed aluminium. It does have a sneaky double chin, with the metal bezel (1mm on the edges, 33mm on the bottom), plus an extra bonus 22mm black chin before the actual screen starts. This is how the display stays so thin, all the inner workings have to go somewhere, but the 2-tone double chin does break it up and make it look less imposing.

You can use the screen handheld, but most people will want it on a stand, and there are 3 sleek ways to achieve that through the power of magnets. There is an espressoCase that clips on to protect during travel, and can be folded back into a stand for drawing or everyday use.

An espressoMount, which is a magnetic mount you can attach to a VESA arm (not included) for more permanent set-ups. The espressoStand is a magnetic stand with 2 hinges so you can get just the right angle. It's the Stand that's been my main go to because it's so versatile. It folds up really small to fit in the front pocket of my backpack, and then folds out to get to the height I need.

Aside from cables, the other physical accessory is a pen, which has the same functionality the Surface Pen as long as you're using it in an app that supports it. I really liked using it to mark up PDFs and doodle in meetings while making handwritten notes. 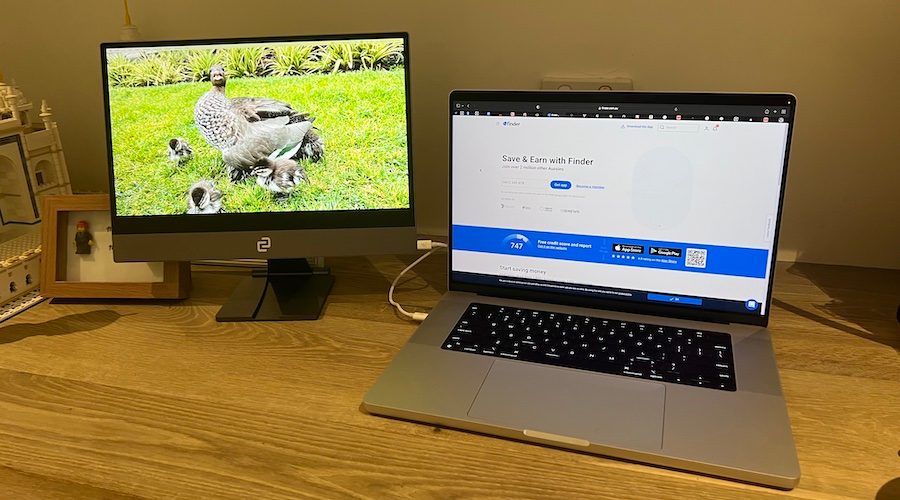 It's an incredibly functional device, with a suite of accessories that show clear consideration for how people might need to use it. The 2 USB-C ports on the side are perfect for most users with newer laptops, because you can just plug it in to your computer with a single cable for both power and connection and you're on your way. If you have an older computer, or are using it with a game console (it would be great with an Xbox Series S), you'll need a converter cable and to use the second port for power.

As far as durability goes, it doesn't have an IP rating, so I would strongly advise not using it at the beach or pool. The screen is also a lot of glass, so dropping it seems like a bad idea (I did not test this theory, but let's just go with it). While the espressoCase has case in the name, it's really just a thick screen protector that offers zero drop protection, so make sure you put it in a good backpack.

Set-up is ridiculously easy. There is software you can download from the website if you have any issues, but I just plugged it into my M1 Max MacBook Pro and M1 iMac and it just worked with no issues (once I made sure to use the Thunderbolt 3 port on the iMac). 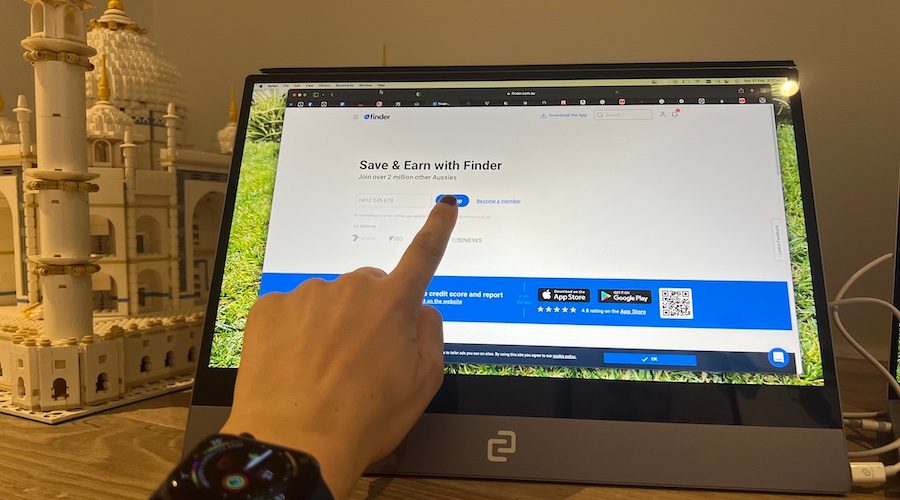 Technically, if you have an iPad, you have a second screen for your Mac that you can then disconnect and use as a touchscreen to mark up PDFs and whatnot, but I've never found the set-up or use of SideCar to be particularly smooth.

Having a dedicated device like the Espresso Display V2 makes a real difference because it's so easy to use and there's no need to transfer files between devices to take advantage of touch or pen controls. Of course, touch and pen aren't perfect across all of the Mac OS, but the espressoFlow software makes it work in the apps where you really need it, like Adobe software.

I really like how bright the screen is, and how vibrant the colours are. The only problem is that the resolution is 1080p, which is significantly lower than the Macs I had it plugged into.

It's fine, for most purposes; the secondary screen is secondary after all. But, given that there are plenty of 1080p portable displays for well under $700, it does make for an odd choice. I found it ideal for notes, Slack and research docs. 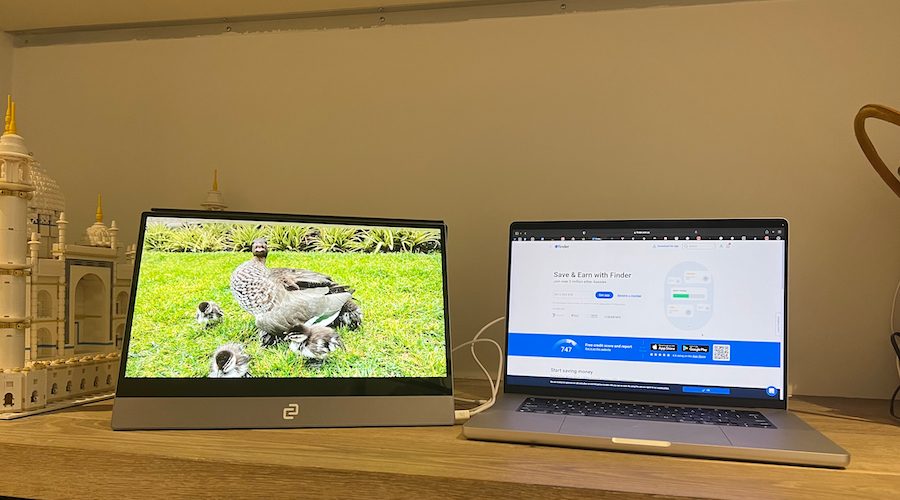 That said, this isn't just a regular display, but a touch screen that can bring touch features to the Mac, and I think that justifies the higher price. In that regard, it functions extremely well, even if I have to be a little more precise in my touch movements than I'm used to. I found it neat that when the main screen was selected, the Espresso Display V2 acted as an input device for that, adding touch controls. When the Espresso Display is selected, then the touch controls are for that screen.

Everything about this device, from the display itself to the accessories, is made to be used and transported easily. From setting up the stand with the one-touch magnet, to just plugging in with a single cable.

The price makes it less than ideal if you just wanted a display set up permanently in a home office and didn't need to add touch controls. But if you want a portable display, or want to add touch to a Mac or PC that lacked it, then this is the way to go.

It's not perfect, but if price was no object up to $1,000, it is the portable display I would always choose to take with me when travelling.

I keep trying to find something I dislike about the Espresso Display V2, but I just can't. It does exactly what it's designed to do in an easy and attractive way.

$749 is a little on the high side for a portable display, but given it's a small Australian company that's just brought touch controls to the Mac for the first time, I'd say it's justified. Bargain hunters should look elsewhere, but if you want the functionality of this display with a smaller price tag, you can opt for the 13-inch Touch and 13-inch non-touch models of the display and save $100-$200.

After wrestling with an iPad in Sidecar mode when spending days in and out of the office last year, this really is the display I was wishing for. 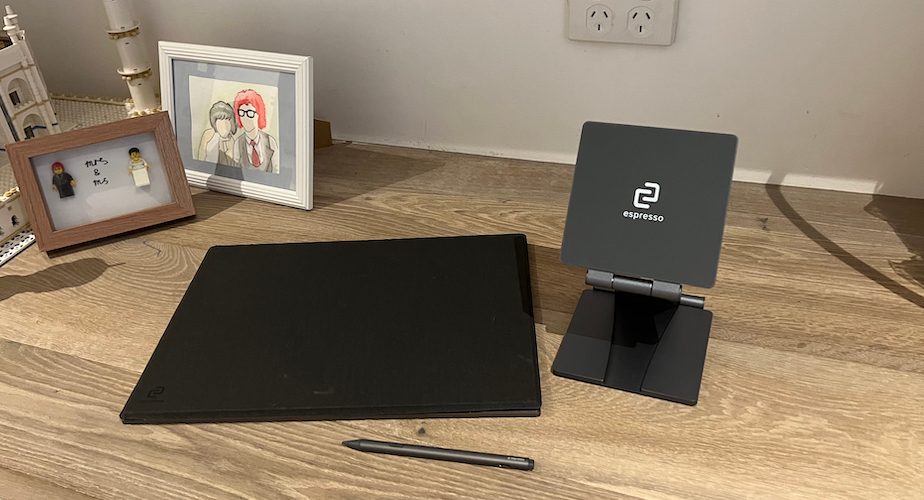 I spent 2 weeks using the Espresso Display V2 Touch with an M1 iMac and M1 Max MacBook Pro. This unit was provided by Espresso PR for review purposes.