Quick verdict: The GSP 602 is a great-sounding stereo gaming headset that doesn't quite justify its premium price tag.

If you haven't heard the EPOS name before, that's understandable. It's only been around since 2019 when it became the new umbrella brand for gaming headsets and enterprise audio solutions previously sold under the Sennheiser Communications moniker.

Two of the first gaming headsets to hit the market following this rebranding are the EPOS | Sennheiser GSP 601 and GSP 602. Both are the same headset, just with a different colour scheme: the 601 is black and white, while the 602 is black, blue and orange.

Colours aside, the GSP 601 and 602 are identical to the Sennheiser GSP 600 released back in 2018. So, how do they hold up against the competition two years later? Let's take a look. 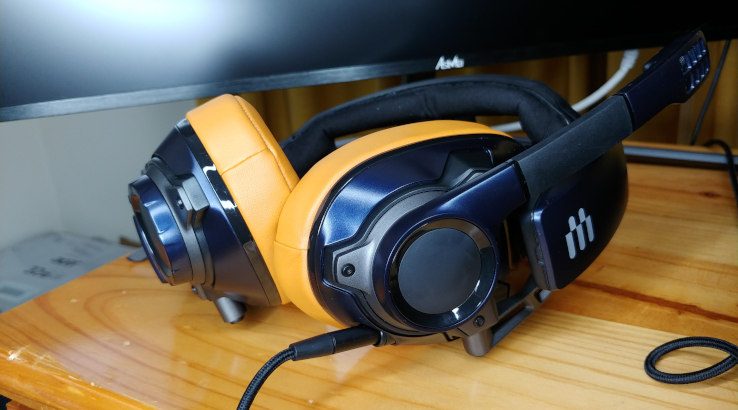 The GSP 602 is loud – not from a volume perspective, but in terms of its visual design. Unlike the sleek and subdued frame of the Sennheiser GSP 370, the GSP 602 is all about seams, screws and other industrial-looking components. It's not the most attractive aesthetic. The faux girders surrounding each ear cup are plasticky and cheap-looking, undermining the headset's premium price tag. The whole package is quite large, too, taking up a lot of real estate on your head.

If you're looking to draw attention to yourself while gaming, this ostentatious design certainly does the trick. But if you plan on using the GSP 602 in the office or out in public, bear in mind that it's anything but discreet.

While it looks a little like a Meccano set, the GSP 602 is actually quite comfortable. The large ear cups fully encompass the ears, applying firm pressure dampened by the pleasantly soft ear cushions. I found it easy to wear the headset for hours on end. It feels like a sturdy, well-built product too, capable of surviving plenty of wear and tear.

My only criticism is that the headband could use a little more padding, as its plastic edge would occasionally press into my scalp when seated at certain angles. Fortunately, a quick shift of the adjustable headband would alleviate these moments of discomfort.

The GSP 602 is a strictly wired headset that uses a 3.5mm connection rather than the increasingly common USB or USB-C connections. This is great for compatibility, as it means you can use the headset with your PS4, Xbox One, Switch, PC, phone, tablet or any other device that sports a 3.5mm headphone jack.

You get two braided 3.5mm cables included with the GSP 602: a two-prong cable for splitting out headset and mic audio on PCs, and a single-prong cable for other devices. It's all plug-and-play, with no need to install extra software or configure audio drivers to get the headset working.

As is the EPOS/Sennheiser way, the mic on the GSP 602 is not detachable. Instead, you can swing it upwards when not in use and it will automatically mute itself. Funnily enough, the bulkiness of the headset works in its favour here. In its raised position the mic sits outside peripheral vision, avoiding the distraction issues I noted in my Sennheiser GSP 370 review.

With the mic attached to the left ear cup, the right ear cup houses a dial for adjusting the headset's volume. This is distinct from the volume setting of the device you're connected to, so you don't get any on-screen notifications when adjusting the dial. 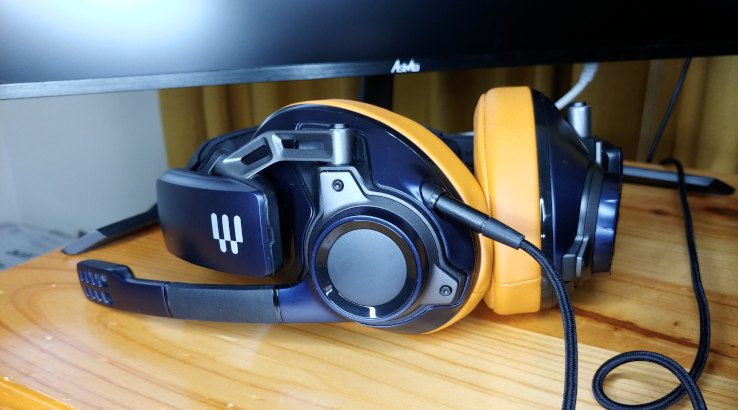 Before discussing audio quality, it's important to note that the GSP 602 is a stereo headset with no support for surround sound out of the box. This feels like a curious choice for a modern gaming headset. Virtual surround sound implementations have become increasingly common and impressive in recent years, delivering a more accurate facsimile of true surround sound. Its absence here is quite a bummer, limiting the GSP 602's ability to convey the illusion of physically occupying a virtual space.

That aside, the GSP 602 sounds fantastic. Whether it be the gut punch of an auto-rifle round in Destiny 2, the booming retort of a shotgun in Battlefield 1 or the sizzle of searing plasma in DOOM (2016), audio quality is clear and sharp. You do need to crank the volume pretty high to enjoy the full force of each sound, though, as lower frequencies come through a little muffled and muted at quieter volumes.

This leads to my biggest issue with the GSP 602. With the volume maxed out, the limitations of a stereo mix become considerably more apparent. Discrete audio sources start to blend together, losing the clarity that allows you to pinpoint where they're coming from. Important audio cues clash with each other, their efforts to attract your attention more overwhelming than informative.

How disorienting this can be differs from game to game. In Battlefield 1, for instance, the audio mix maintains clarity even as the cacophony of war rages around you. In DOOM, on the other hand, hectic battles can devolve into a confusing wall of noise. Gunshots disappear beneath the trill of a low-health warning, demonic cries are lost under the roar of a nearby explosion. It's all so crowded; absent is the spatial delineation of a good virtual surround sound solution. As hard as I tried, I never managed to find a satisfying middle ground between the GSP 602's powerful sound capabilities and clear separation between audio sources.

While I keep harping on about the lack of surround sound, it's less of an issue in some genres. Positional audio isn't as meaningful in strategy games, adventure games, top-down RPGs and even racing games to some extent. For genres like these, a stereo headset can be just as capable as a surround sound one. But if you play a lot of first- or third-person shooters, the GSP 602 is at a marked disadvantage.

To close out on a more positive note, the GSP 602's over-ear design does a great job of blocking out ambient noise. The cushions form a tight seal around the ears, muffling the sounds of typing and clicking even at low volumes. The microphone is similarly impressive, capturing clear and crisp speech at low, medium and high volumes. Passive noise reduction is excellent, filtering out all but the loudest of background sounds. 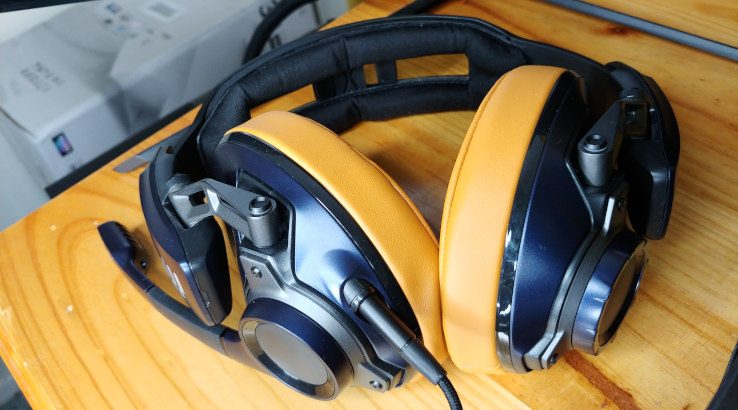 The GSP 602 doesn't offer a whole lot of extra features. Its calling card is compatibility, supporting any device that features a 3.5mm headphone jack. Being able to use the same headset across PC, PS4, Xbox One, Switch and your phone is pretty convenient.

At the same time, that plug-and-play philosophy robs the headset of customisation options. Since there's no accompanying software suite, you're missing out on common tools like an EQ, chat mix slider and other audio enhancements. This is a significant deterrent for folks who want to fiddle and tweak to find their optimal audio settings – the same folks who, I suspect, would be most likely to drop $319 on a gaming headset.

The EPOS GSP 602 is a great-sounding headset, albeit one that lacks many of the features you'd expect from a modern gaming-focused device. Opting for stereo sound is certainly an odd choice, especially given the enhanced fidelity and competitive edge modern surround sound implementations offer, but there's an argument to be made for the raw clarity of two-channel audio.

What is harder to justify is the lack of extra features and customisation options. At $319, the GSP 602 fails to deliver value on par with the competition. Not only do you have other stereo headsets like the HyperX Cloud Mix offering comparable audio quality plus wireless connectivity at a similar price, you could snap up the Razer BlackShark V2 with its excellent surround sound solution for almost half the cost.