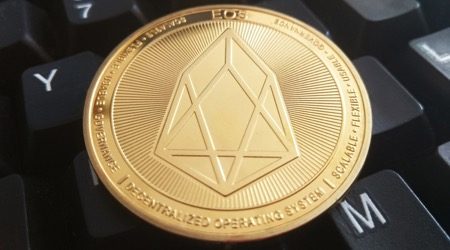 EOS trading volumes are up as the coin sets a volume record that exceeds Visa's current performance.

After significant and rapid price increases on Monday and Wednesday last week, EOS surged to reach $9.13 after starting the last seven day trading period at around $6.80. That massive jump was tempered by a dip later in the week back to just under $8.00. But, overall, that represented a substantial gain.

The good news, aside from the gain in value for the market's fifth most valued coin by market capitalisation, is that trading volumes are holding even when the price is staying relatively steady.

Early in the week, trading volumes were sitting at around $380 million over 24 hours. But the mid-week surge saw them leap to over $1 billion and hold and hover around $900 million after that. As we've seen in the rest of the market, trading volumes are up as the bulls return to what has been a bear-dominated market for the last few weeks.

Will that upwards movement we've seen be short-lived or does it mean we can expect EOS to keep moving forward?

Coin Telegraph says there's a possibility we could see the price slump back to $6.89 with the $9.44 resistance level proving crucial. In their view, if EOS can break out over $9.44 there's an upside target of $15 with some resistance around $11.64.

Stock Gazette, amongst others, agrees that $9.00 looks like a significant level for EOS. Once that is breached and the price holds, we can expect the value to go up further. At least that's what many analysts think.

Whether news that EOS was able to set a transaction record, reaching 3,000 transactions per second, which exceeds VISA's 1,700 per second transaction volumes, was part of what buoyed EOS this week is hard to say. But news like that will be of interest to institutional investors who have been holding back because of technical limitations seen with some coins. This kind of news differentiates coins from each other.

The record set by EOS represented about 1% of its maximum blockchain capacity.

Most of the time we see the market move in unison, but achievements like this and other commercial deals that are brokered should see different cryptocurrencies move independently.

While we still live in relatively volatile times with cryptocurrencies, news such as EOS transaction volumes, the commercial banking deals done by XR and similar are important as they seal growing maturity and acceptance. As that happens, regulators will step in to ensure the trading playing field is as fair as possible and institutional investors will bring their cash to the table.