Alleged EOS Ponzi scheme runs away with US$50 million

According to both the Chinese crypto news outlet ChainNews and to The Block, EOS Ecosystem, a prominent EOS wallet, has disappeared with its users' money, and users report not being able to log in.

According to ChainNews via Google Translate, the amount lost is more than 3 billion yuan (over US$424 million). According to The Block, the sum is $52 million.

According to the blockchain, the wallet that reportedly holds the stolen funds has about $48 million of EOS at the time of writing. The account is named "huobidevice3" but is not believed to have any affiliation with Huobi.

EOS Ecosystem was ostensibly an interest-paying wallet, where you entrust your EOS tokens to the wallet and it pays out daily profits. Allegedly, it was a straight up Ponzi scheme.

Supposedly, EOS Ecosystem was widely known as an alleged Ponzi scheme. It was reportedly sued in a local court in China, and it's claimed to be affiliated with a number of block producers and other EOS organisations. These organisations have disavowed any association and claimed EOS Ecosystem is a scam on multiple occasions.

The wallet's daily returns didn't pass the sniff test either.

"The static income is as high as 0.342%-3.42% per day... the annual reward of EOS voting is to split the total of 1% of the newly added EOS tokens, so the final result is to run away with the money," ChainNews says via Google Translate.

There is no red flag large enough to express how utterly skeevy this scheme looked, but it still managed to supposedly pull in a fortune.

"This point has been knocked on the blackboard countless times, but there are still people who can't remember," ChainNews laments.

Part of the reason the scheme succeeded is because it managed to get its claws into people and pay out the promised returns for a period of months. These people would then independently start evangelising the Ponzi scheme and drawing in new users.

"Because the EOS Ecosystem survival cycle is long, many leeks slowly put down their vigilance," ChainNews says.

"According to fans, they can convince you for a long time for a few months. Three people can become tigers, not to mention the benefit of someone talking about something in your ears for two or three months."

The group was also careful to try to introduce some kind of vague technical explanation for how those returns were possible.

"Unlike the simple and crude pull of Dogecoin, this time the MLM team has established an EOS ecology for itself, which is based on technology flow," ChainNews says.

And most of all, it was very communicative, staying in constant contact with its users.

These are the three golden rules of running a successful Ponzi scheme.

Of course, cashing out isn't so easy.

At the time of writing, the funds are still sitting in the wallet, and they could be staying there for some time.

"To be honest, EOS is not a good way to cash out after the lap, and it is easy to be tracked. Monitored."

This means the stolen crypto could just sit around like a ticking time bomb, as the alleged scammers wait for things to quiet down. Then at various points down the line, it periodically explodes onto the markets, driving down EOS prices with a series of dumps.

This is what we saw with PlusToken. It was a considerably larger Ponzi scheme than this EOS scheme, but it was also dumping into the much more liquid Bitcoin and Ether markets, among other coins.

It's not possible to say exactly how PlusToken impacted Bitcoin prices, but analysts have found at least some kind of impact beyond the point of coincidence. 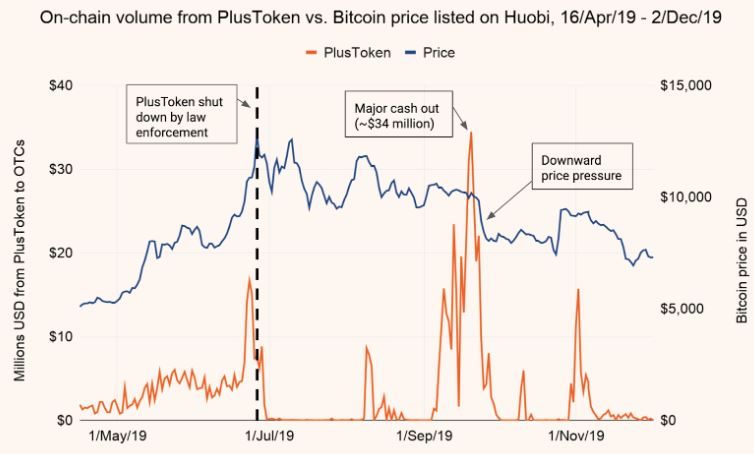 "Like... PlusToken, it has been lying quietly in the wallet," ChainNews warns. "Up to now, EOS has nothing to rise, and now there are so many funds that need to be cashed out, so EOS may not be too strong in the future."

The problem is compounded by the fact that EOS has historically been something of a hotbed for leeks, ChainNews suggests.

"The fact is that EOS ecological community, EOS finance, EOS ecology, EOS planet and other projects have now run away and disappeared in the long river of history," it says.

"It's like the more money we come across, the more problems we see," the Notorious B.I.G. summarises.