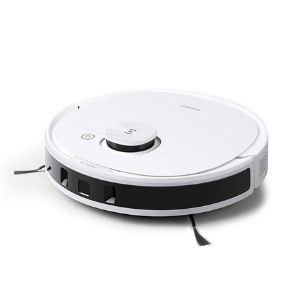 The $799 Ecovacs Deebot N8 Pro sits between those extremes. That could have left it a compromised machine. Instead, it's a good robot vacuum cleaner at a solid price. 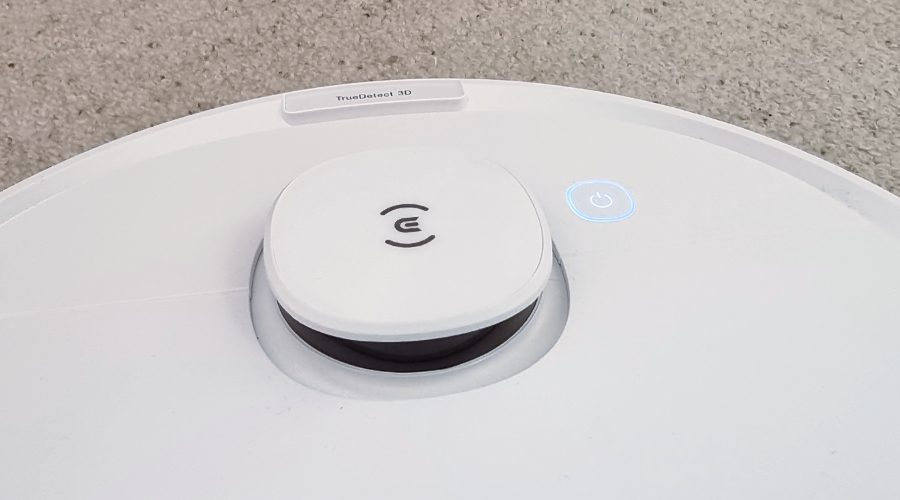 Is it robot-vacuum-cleanerist to say that all robot vacuum cleaners tend to look alike? If so, I'm guilty, because my first thought on unpacking the Ecovacs Deebot N8 Pro was that there wasn't much to say about its construction and design that I haven't said for almost every robot vacuum cleaner I've reviewed for Finder.

Is it circular? Check, because that's a more workable design for getting around houses. It's also more comfortable for when it might bump into your legs.

Is there a raised bump housing a camera module used for distance and mapping calculations? For sure. 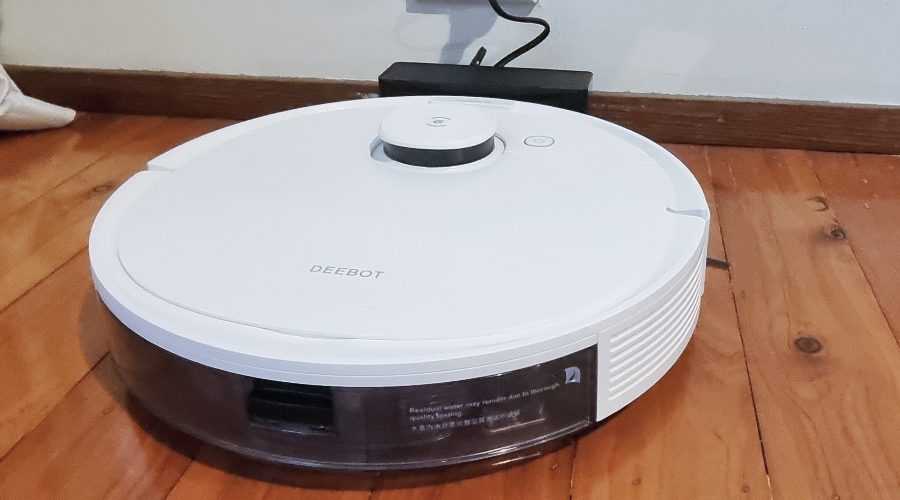 Is there a flat wall charger with a standard cable? Again, the answer is yes. You can optionally pay an additional $399 for an auto empty station, presumably the same technology we saw on the Ecovacs Deebot T9+, but that wasn't supplied for review so I can't speak to how well that actually works.

Like most (but not all) robot vacuum cleaners, there are 2 rotating sweeper brushes to fit to the underside. You also get an optional mop head for when hardwood floors need cleaning.

The only observation that I can make about the Ecovacs Deebot N8 Pro's design is that while shipping only in white makes for a striking first impression, it doesn't take long for dust and other debris to show up on its surface in a way that you don't see as quickly on black models. 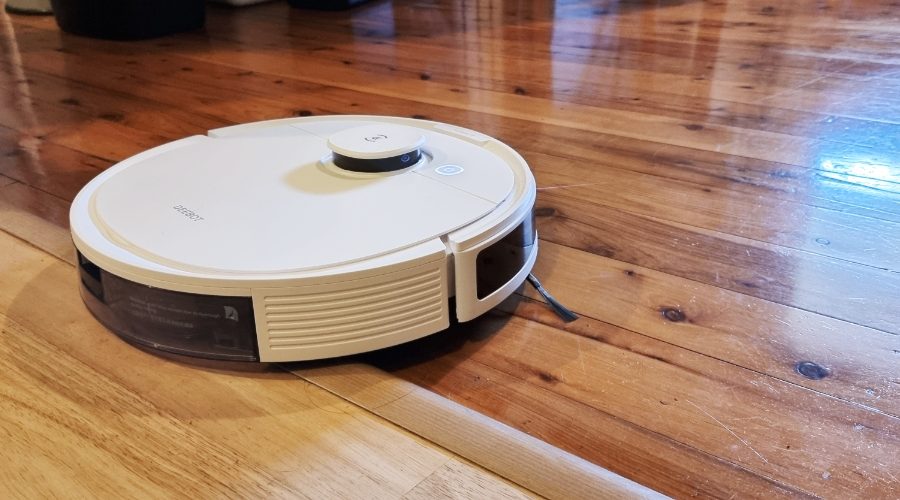 The Ecovacs Deebot N8 Pro covers the basics of smart robot vacuuming including mopping with a removable dustbin and mopping head. Again, this is all standard across the robot vacuum cleaner industry, as is the use of a specific app for setting up your shiny new robot cleaning friend. 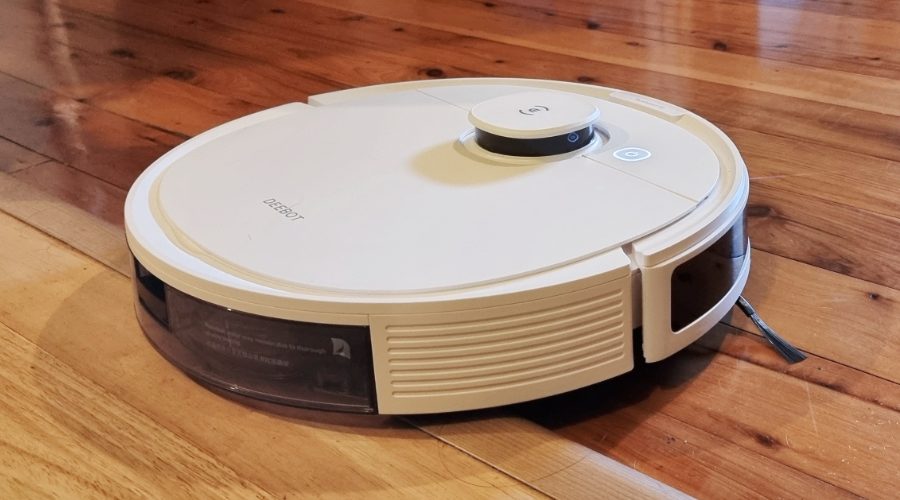 The Ecovacs Deebot N8 Pro uses the same Ecovacs app for Android and iOS as its other robot vaccum cleaners. The app has definitely improved in its set-up routines and general ease of use over that period. Getting it onto your wireless network takes a matter of minutes, although that could be longer if you need a firmware update. You can even name your new Ecovacs Deebot N8 Pro if that takes your fancy.

Because it's compatible with both Google Assistant and Amazon Alexa, I opted to call it "Dustpocalypse Now", purely because I wanted to see if I could get Google to say that.

Spoiler: It worked, so be careful with what you name the Ecovacs Deebot N8 Pro.

The Ecovacs app also allows you to set multi-floor mapping, create virtual no-go zones and set the level of cleaning for identified areas depending on your needs.

This isn't on a per-maps basis either, because you can tell it to set parameters for areas it identifies once it has created a map. You can vacuum certain high-traffic areas more than once, or pump up the pressure on its 2600 Pa vacuum for a deeper clean, or opt for lighter coverage for a quieter or faster cleaning process. 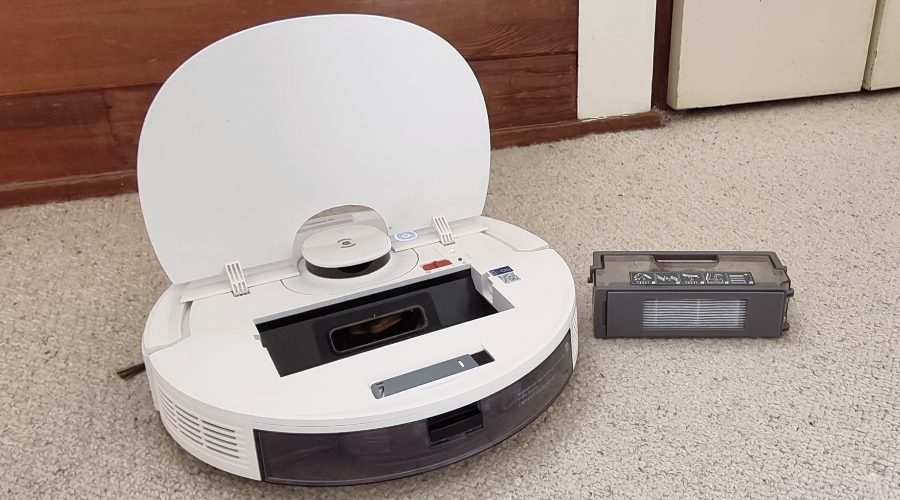 App control is one side of the robot vacuum cleaner story, and actual cleaning is the other.

In the past, I've noticed that distinct line around both coverage and robot smarts in Ecovacs' line-up.

Cheaper models tended to get stuck more frequently, or lose their place within my home more often. Smarter models avoided areas where they might get trapped, navigated up smaller sills without issue and returned home to charge intelligently.

The good news here for the Ecovacs Deebot N8 Pro is that it falls solidly into the latter camp. I've tested it out in my suburban Sydney home with multiple levels of hard wood and carpets, and it's not missed a beat during the entire review process. 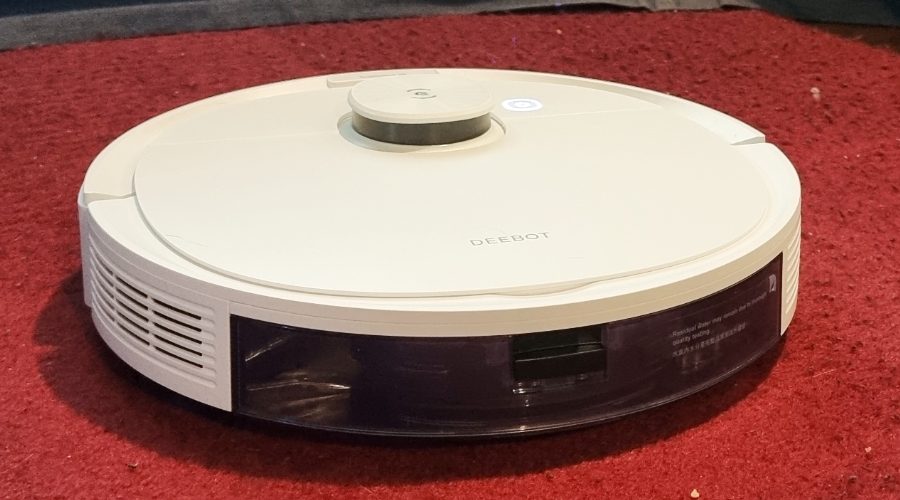 There are a few hard wood raised floor areas that often cause cheaper models to stumble or rumble their wheels trying to get up them, but not the Ecovacs Deebot N8 Pro.

Likewise, even when I deliberately moved a few furniture pieces mid-vacuum, the Ecovacs Deebot N8 Pro made its way cleanly around them without issue. 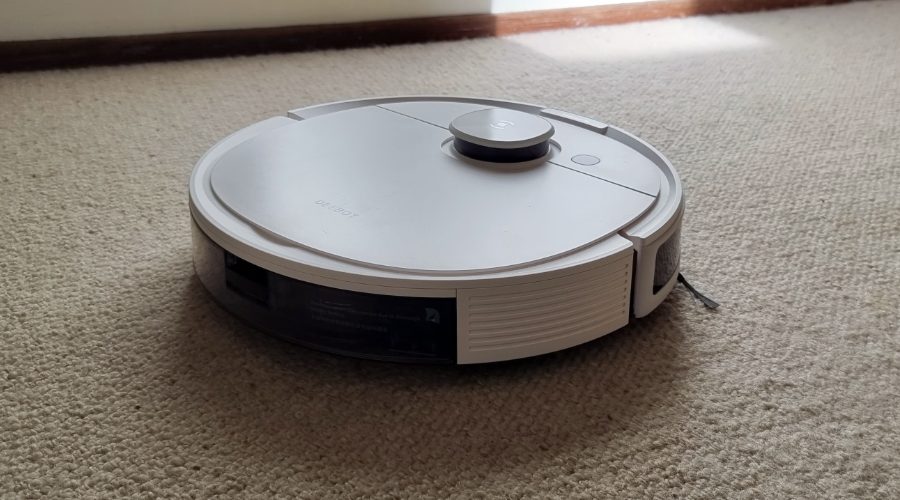 They're excellent for those horrible-to-reach areas like the underside of the sofa, but not quite the match of a full high-powered human-driven vacuum cleaner in terms of catching every last stray crumb and dust bunny.

That's still true of the Ecovacs Deebot N8 Pro, although if you are using it daily it can quickly become part of your routine and your maintenance-level cleaning.

Battery life: Fair but be prepared to wait between charges 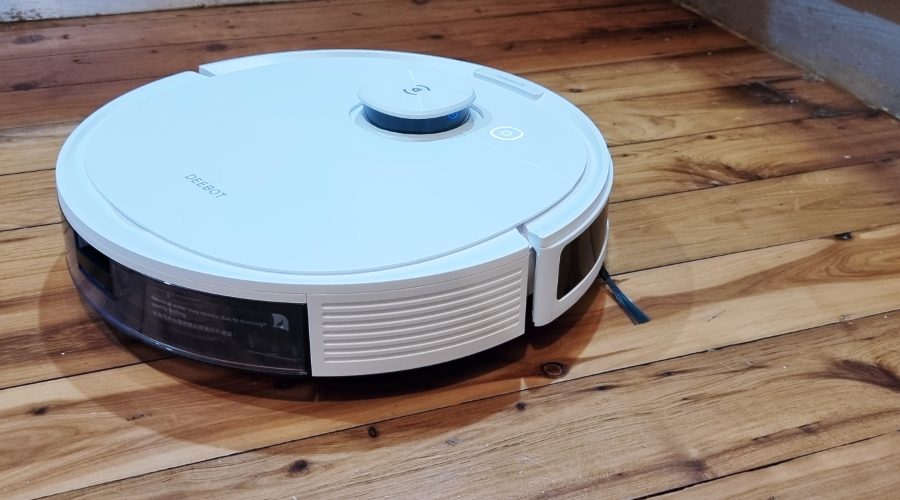 At the time of writing, Ecovacs doesn't actually have a listed battery expectation on its Australian website for the Ecovacs Deebot N8 Pro at all.

Its specification page is blank, so all I can go on is my own experience testing it out in the real world. Here it's capable of up to an hour's runtime, which is on the lower side for a robot vacuum cleaner.

Those improved smarts, and, no doubt, its LIDAR-based detection and constant mapping, mean that it is smart enough to return to base when its power is low. 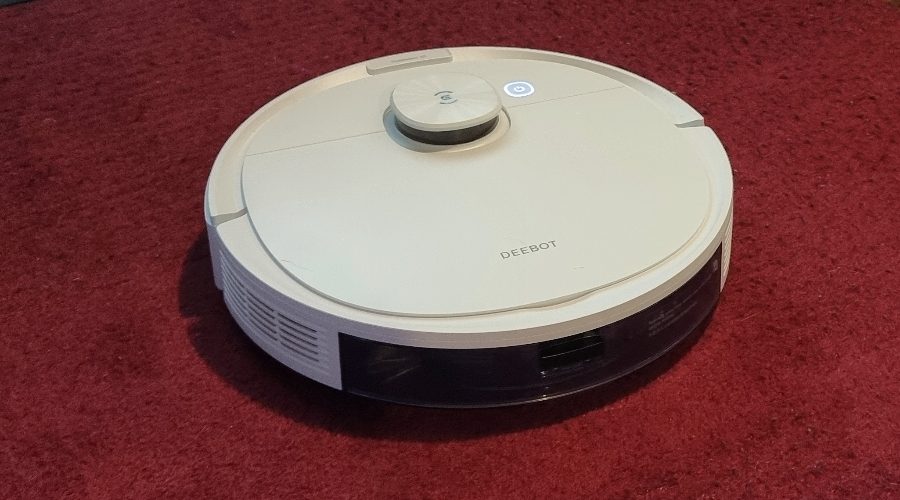 It will do so before it conks out, charging up enough to then complete a given job, but this is not a fast process. If you've got a much larger floor area to cover on a regular basis this could be an issue.

It's also an issue if you have cats or small children who might knock the Ecovacs Deebot N8 Pro off its charging base while it's juicing up.

My own kids are old enough not to do that, but I did hit one instance where it failed to charge due to a cat running past and knocking it just enough for it to stop charging.

Should you buy the Ecovacs Deebot N8 Pro? 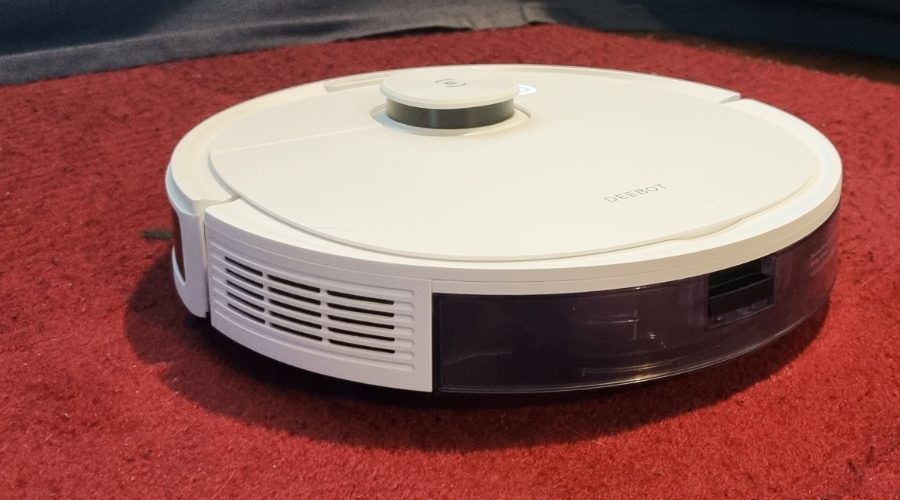 The Ecovacs Deebot N8 Pro sits in a sweet spot for robot vaccum cleaners. It won't cost you a lot to buy by robot vacuum cleaner standards, but you're not settling for mediocre coverage or a particularly stupid robot in return.

It's still a truism that while there's a convenience to getting a robot to clean carpets and floors, it won't get everything, despite the claims of manufacturers. The Ecovacs Deebot N8 Pro is smarter than you'd expect at its price point, and is recommended. 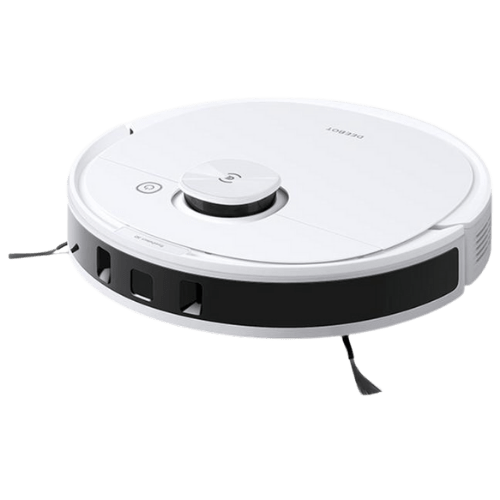 The Ecovacs Deebot N8 Pro was put through its paces in a split level Sydney suburban home, cleaning and mopping hardwood floors and vacuuming carpeted areas over a 3-week testing period.

The realities of lockdown meant that the 5 household inhabitants were not going outside quite as much, and were all stuck in the same locale during the day and all day, which isn't my usual cleaning pattern.