Economist: Stablecoins are doomed to be either too fragile or unscalable

Libra might be inevitably doomed, but thankfully it hasn't let that get in its way.

"Stablecoins are either fragile — they are prone to attack and collapse if they are only partially backed or collateralised with actual dollars or dollar bank balances, or they are prohibitively expensive to scale-up if they are, in fact, fully or over-collateralised," he said at the Unitize Conference.

The reason people keep trying to build them anyway is because they aren't always great with economics, he suggested.

In his experience, Eichengreen said that prospective stablecoin founders "knew all about blockchain... they didn't know much about monetary economics".

Libra will fall victim to these problems, he suggests.

"There are some very big uncertainties, I think, that would have to be resolved in order for this creation to get off the ground, and my conclusion remains that some of those problems are insoluble," he said.

The line of reasoning here is basically that fully-backed money does not work for payments in the current financial system.

Collateralised stablecoins need to be supported by assets held on a vault somewhere, but the sheer volume of payments these days means a fully backed stablecoin would need a ridiculous amount of collateral to see wide scale use. It's estimated that $600 billion of stablecoin would be needed to support $1 trillion of daily transactions. But here's what annual retail payment volumes look like. 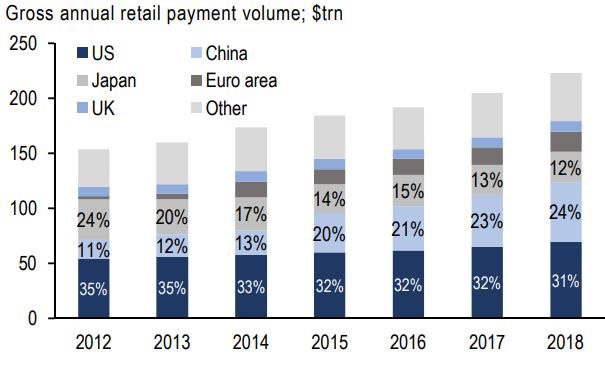 If you want your stablecoin to take a significant piece of the global payments market while remaining fully collateralised, you need to be prepared to create a black hole of money, and lock up enough collateral to destabilise entire economies.

You then need to keep shoveling billions more onto the pile to retain your market share and keep payments working as volumes grow, while also finding a way to somehow keep that collateral safe from both inflation and the vagaries of the market. In fact, in today's climate of market turbulence and negative yield bonds, there's actually a very good chance you'll find your collateral pool actively shrinking.

This isn't a problem for most stablecoins, who can point out that they're fine with being a bit player in the grand scheme of payments and that it works fine for their users. But when a giant like Libra emerges with big plans for a fully collateralised stablecoin, those plans are coming with the tacit assumption that Libra will start locking up vast sums of money without too much concern for what will happen and how the global financial system could be destabilised if something goes wrong.

Only banks are allowed to do that.

The obvious alternative for stablecoins then, is to, like banks, keep payments flowing and the wheels of the economy greased with fractional reserves. This opens the door much wider for various attacks, Eichengreen says, noting that history has many examples of speculative attacks on pegged exchange rates.

Even with full collateralisation as the norm, the DeFi world is full of examples of successful DeFi attacks on exchange rates, price oracles and other elements. The risks get even higher and the margin for error gets even smaller with fractional reserves.

The obvious way of solving that then ends up circling back to something like the current banking system: a limited set of entities at the centre of the world's payments, whose fractional reserve and capital concentration risks are offset by strict regulatory oversight.

"Libra is an interesting idea that will never see the light of day," Eichengreen predicts.

But even if it doesn't, Libra has already done its job in a way. It helped kickstart the CBDC arms race, and even if it's not a feasible payment system on a massive scale there are still plenty of places stablecoins can improve on existing payments systems on a smaller scale, such as in emerging markets.

While it's not possible to say for sure, it's likely that the entry of CBDC will lead to us gradually rethinking what we know about money and some of the assumptions we've always had about it. For example, that money is money and we can't use assets as currency, or that money will always be the domain of central banks.

Whatever's next for stablecoins, and Libra in particular, the developments they've spurred is a good reason to be at least a little bit glad that its creators aren't listening to everyone who says it's impossible.

Disclosure: The author holds ETH, BNB, BTC at the time of writing.