An uppercut above the rest.

When the ref yelled “Let's get it on!” this MMA fighter wrong-footed and floored me with a kindness. While EA is not a publisher known for its generosity – see: the tightfisted antics of Battlefront II and Need For Speed Payback – UFC 3 handed me the one thing I wanted most for free. Providing you have a previous save for UFC or UFC 2, you'll get an unlock of the undisputed GOAT, Bruce Lee. That's a damn good first impression, EA. Please engage in this practice more often.

Unfortunately, that's also the only surprise I got from UFC 3. What EA is famous for is delivering a yearly sports franchise with entries that aren't massively adventurous. Sure, they'll look a little slicker than last time, but by and large, the “new” features are deja vu transpositions from other EA Sports titles. The collectable card shenanigans from FIFA (that insane people drop hundreds of dollars on) is here again. The up-and-comer story mode is present and accounted for, too, just like you thought it'd be. UFC 3 is more predictable than a cartoon spin-wind-up uppercut.

That's not to say there aren't some great times to be strangled out of this. It's quite obvious that EA has spent the offseason feeding its fight engine with delicious new motion-capture data. Its graphics engine has been suitably 'roided up as well. Providing you're holding the right button modifier, you'll bear witness to some truly bone-rattling hits that will be felt in the pit of your stomach. Keep it up and you're in for some disturbingly accurate tissue deformation as the on-screen fighters devolve into bleeding, wobbly-kneed meat sacks. It's rare for me to talk to my television whilst playing a video game, but every single KO moment in UFC 3 managed to draw an “oof” noise from me. The last fight sim to do that was the criminally under-loved Fight Night Champion. 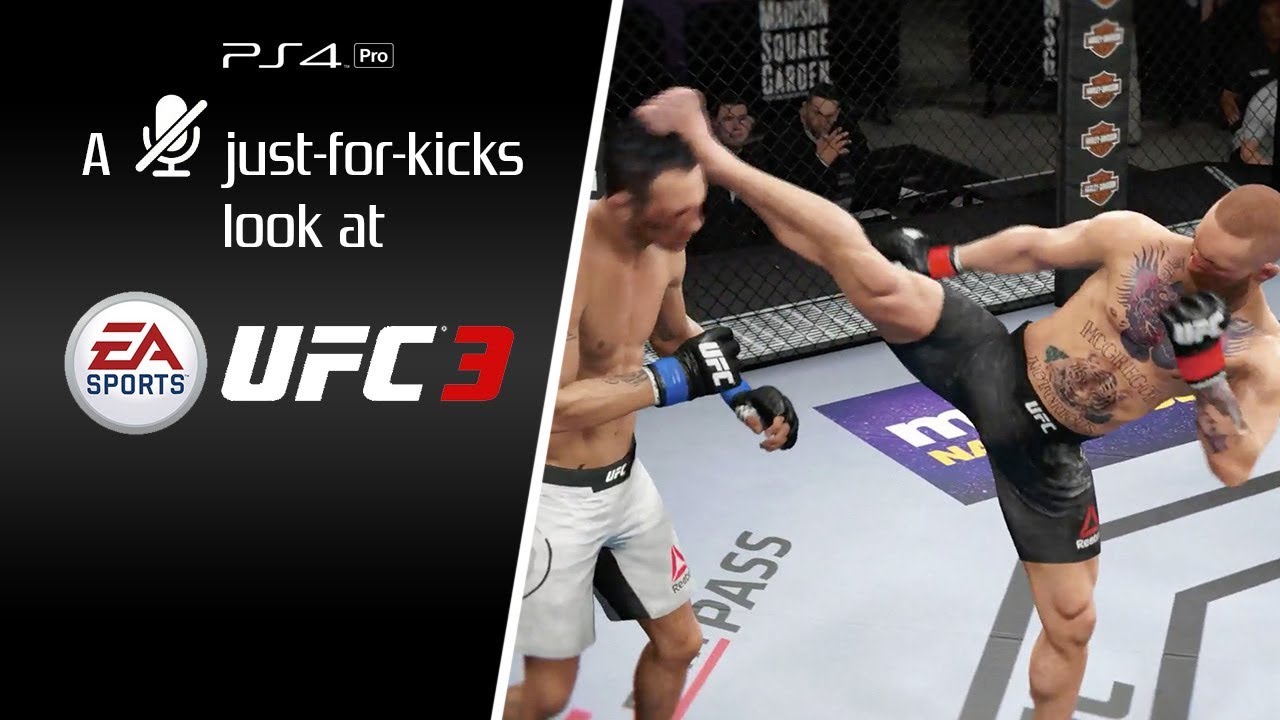 The striking game is simple and approachable stuff. Your face buttons correspond to your four limbs, a number of button or stick modifiers can change the height and potency of the strike, and you can now better unload these while you're on the move. Dodging on the right stick is a cinch, too; you can basically pick everything up in a matter of minutes but it'll take hours to plumb the depths of these systems.

Notably, UFC 3 strips out the weird Fight Night-style parrying and adds in vulnerability windows that feel much more natural to mixed-martial arts. It's a system where opportunists can nip in and counter strike attacks that have missed their target, ensuring that the uppance comes swiftly to flailing button mashers. Combine that with the ability to dodge and sway on the right stick and the striking game in UFC 3 has never been tighter and more technical.

My only criticism is that the animation system has been improved but not to the point where we're always getting the natural fluidity of two mixed martial artists engaged in a deadly ballet. The post and pre-match stuff is seamless, of course, but every once in a while you'll spot a rusty transition from one attack to another. Sadly, these awkward, immersion-stifling moves are mirrored by the occasional commentary hiccup. Once or twice Jon Anik sounded like he was punch-drunk himself – going off on an anecdotal tangent that had no basis in what was happening on screen.

UFC 3 is also let down a little by its ground-based fighting. Not much has changed since last time. You're still selecting from a pop-up menu to rock-paper-scissor choke your way through a series of potentially lethal hugs. It's still a bit of a trial-and-error mess where not enough feedback is given to tell you why your strategies aren't working. The visual aids EA gives are just too subtle, too, and when you head into multiplayer those rickety, minuscule training wheels are ripped off completely. Also, let's be honest here: flicking options on a radial menu captures none of the intensity and desperation (or romantic misunderstanding) of two people making the beast with two backs in the octagon. UFC 4 will really need to go to the drawing board.

EA will also need to hit the gym and get some mad gains on their career mode. UFC 3 is absolutely huge on presentation and flashy spectacle that blends in-engine graphics with archive video (which should tell you how excellent the visuals are nowadays). However, there's little actual meat to the bones of this mode – you do fights, build up the stats of your incredibly detailed create-a-character, and, for some reason, fire out tweet “bantz” at your competitors. Why is grand-standing self-promotion given equal importance to training camps? Because apparently sportsmanship is dead, people.

While unsurprising, the career is a solid package that's rounded off with a no-frills Tournament mode and ranked/unranked multiplayer. You also have Ultimate Team, the OCD collector mode that lets you unlock tiered versions of fighters, moves and stat boosters. It's fun and addictive, but it's the same old grift: yes, the piddly amount of currency you earn legitimately through normal play can be used, but the field is dominated by min-maxing glitchers or micro-transacting whales. Still, you can get a decent number of hours of fun out of it before that sucker punch appears.

We reviewed EA Sports UFC 3 on PlayStation 4 with a copy provided by the publisher.

Still not up to the sport-replication standards set by the Fight Night series, but definitely more technical and prettier than last time. For UFC 4, EA needs to put an 80s-training-montage-level of effort into its ground game mechanics.