Quick verdict: A delightful compact vacuum with an unjustifiable price. Where to buy
Buy at Dyson

As Petit Miam is to yoghurt, so is the Dyson V12 Detect Slim to Dyson cordless vacuums. It's more or less the same thing but smaller. So far, it has only launched in a few regions, including Australia, New Zealand, China, Japan and Korea. But none for Gretchen Wiener, the US and UK.

Compact versions of things usually also come with the expectation that they're cheaper and a little pared back in features. However, the V12 Slim comes with the latest and greatest in Dyson's accessories, and a price tag just shy of the flagship V15 Detect. The V15 originally launched with an RRP of $1,399 but has since been bumped to $1,499. When you're paying that much for a vacuum, a saving of $200 isn't quite make or break, so let's dive into how the V12 stacks up. 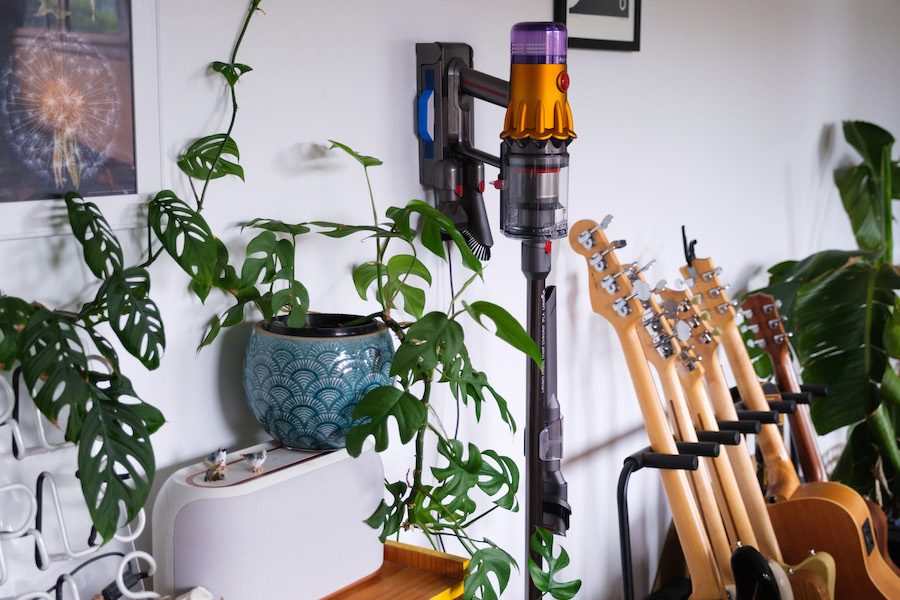 In 1943, Austrian ethologist Konrad Lorenz coined the term "baby schema" – the set of features that babies have that make them so darn cute. Those big eyes and big head zap a human's hardwired sense of care-taking. Psychologists Jonathan Haidt and Gary Sherman theorise that not only does cuteness spark a protective instinct, but a childlike desire to play. Either way, humans love things that are smaller than they "should" be. And the V12 is no different.

It has blockier areas of bright colour, is a little more squat and has a bright red on/off button that looks like an adorably frostbitten nose.

The petite size is achieved in large part by a significantly smaller dustbin. The line indicating maximum capacity is a mere 3.5cm from the bottom of the bin, and when I first saw it I laughed like Thor bemused at petty tiny humans. In fact, the bin capacity is less than half of the V15 (0.35L vs 0.77L). Given that I usually fill the V15 during my daily vacuum, I had concerns about the V12. 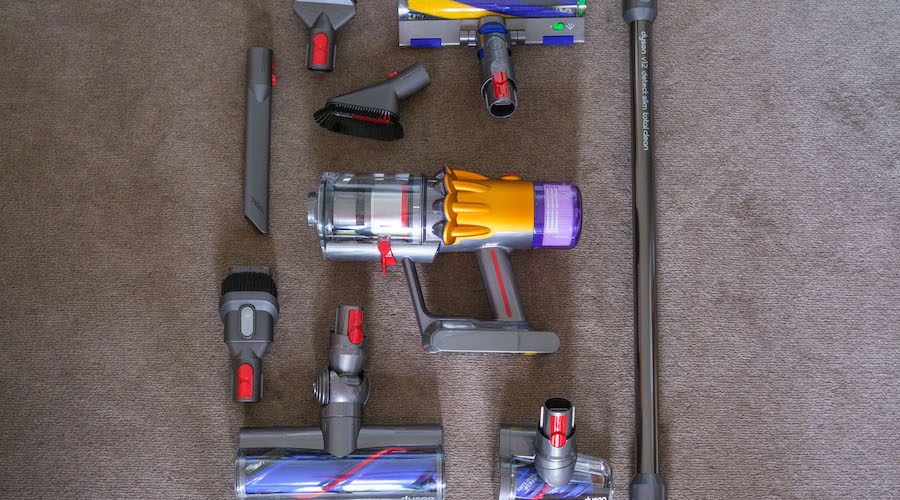 Dyson's signature quality and refined design is on full display here. It feels durable and thoughtfully built. The accessories are the same as the V15 – you can read our detailed thoughts on them in our V15 review.

However, despite functionally being the same, the accessories are not cross-compatible due to slightly different connection points between the 2. This unnecessary change is baffling, and I was quite disappointed I couldn't use my V10 as a spare vacuum with the new attachments.

However, as the V10 is still an excellent vacuum and these are such expensive machines, I doubt most people will be upgrading that frequently. 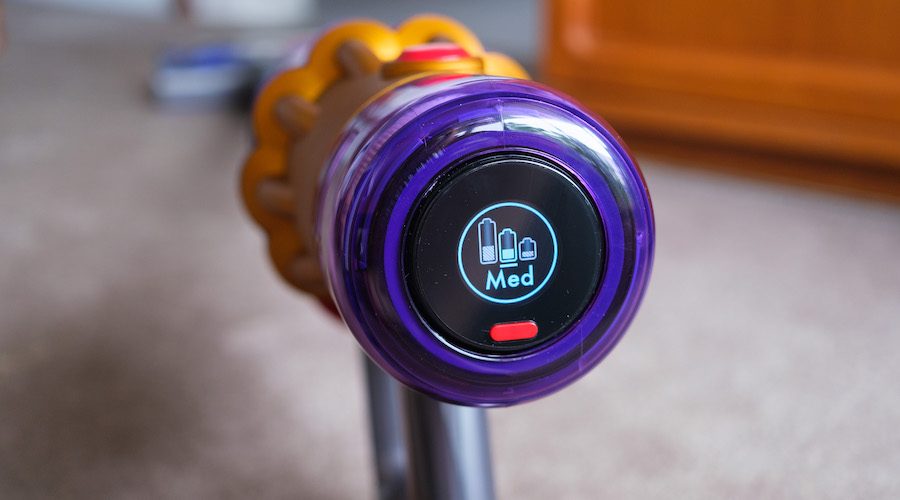 The V12 also delivers their latest technology with a beautiful and bright LCD screen that categorises the size of debris you clean up using a piezo sensor. It also displays projected run time in real-time as well as the power mode. I find the screen hard to keep track of while vacuuming, but it feels more like a luxurious and novel bonus than something you'd want to stare at constantly.

One game changer for me was the wand storage clip. This allows you to attach 2 accessories to the vacuum pole, so for once you almost have enough storage spots for all your included attachments.

I love this so much. It's unobtrusive, elegant and solves a long-standing problem in the vacuum world. It also appears that the wand storage clip is now included with the V15, which was not at launch.

Set-up is as easy as ever, with everything clicking together sensibly and easily. The wall dock allows you to neatly store and charge the V12 with your chosen floor head already attached for quick grab and go vacuuming. 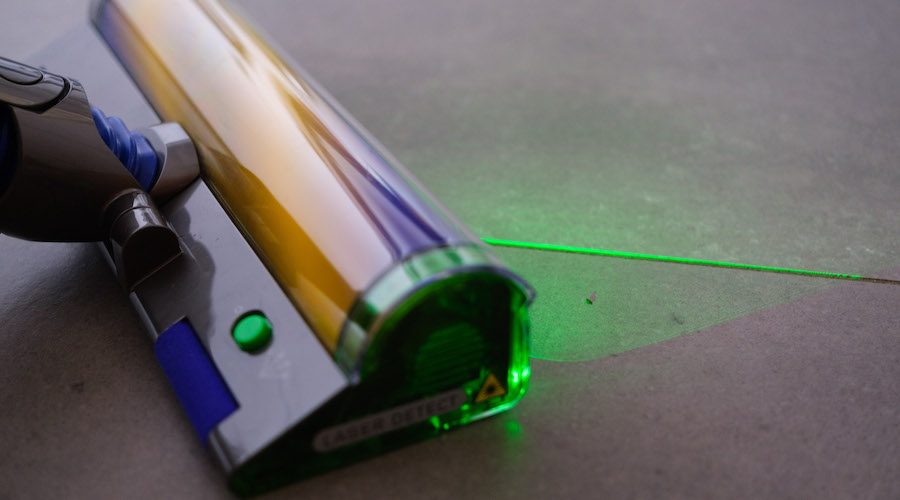 The V12's suction power is less than that of its full-sized siblings, but it still holds its own. It left my carpets visually clean, though another pass with the more powerful V15 did pick up considerably more debris. This is a major downside if you have allergy issues, but I found myself reaching for the V12 more and more, willing to compromise on suction power because of how enjoyable it is to use.

"But Angharad," you cry.

"You're the biggest vacuum freak that I have a parasocial relationship with! How could you accept less-than-ultimate cleanliness?"

It's true, I love clean things, but I love convenience even more. Not being able to see or feel any crud on the floor lets me file it away as "out of sight, out of mind" and go about my day without feeling itchy all over.

In fact, a number of small details culminate in perhaps the most pleasant vacuum experience I've had. For example, though the concept itself isn't new, I loved the on/off button for both practicality and design. It's large and easy to press, and brings some relief to longer vacuuming sessions rather than holding a trigger down. Funnily enough, I'd probably appreciate it more on a heavier machine, but it's still very welcome. Of course, it does mean you need 2 hands to operate the V12, but I never found that to be an issue. 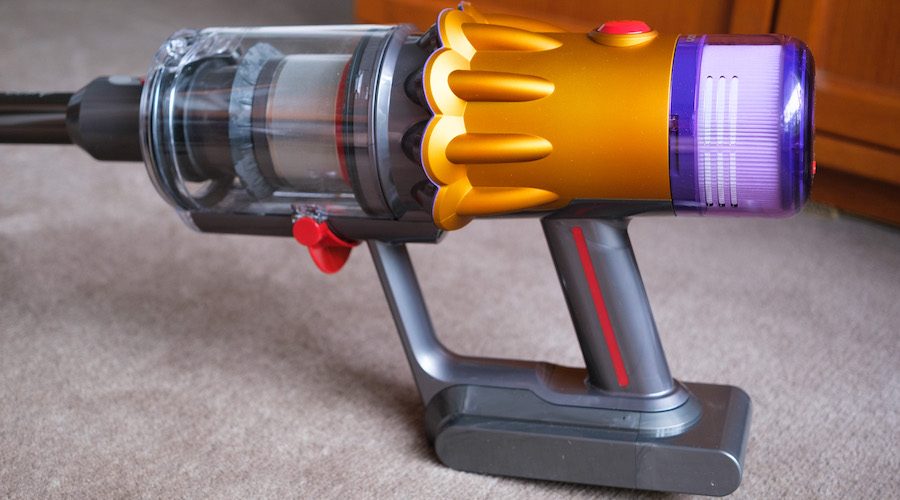 The compact size and light weight combined with Dyson's well-designed floor heads made it feel very nimble and easy to move across the floor. I think this is also partially because the suction power is lower, preventing the head from sticking to the floor, so it's a bit of a double-edged sword.

Coupled with the hair screw tool, the V12 did an okay job at cleaning the car in boost mode. The task was once again made easier with the smaller body, but the end results were not quite as good as I would have liked. 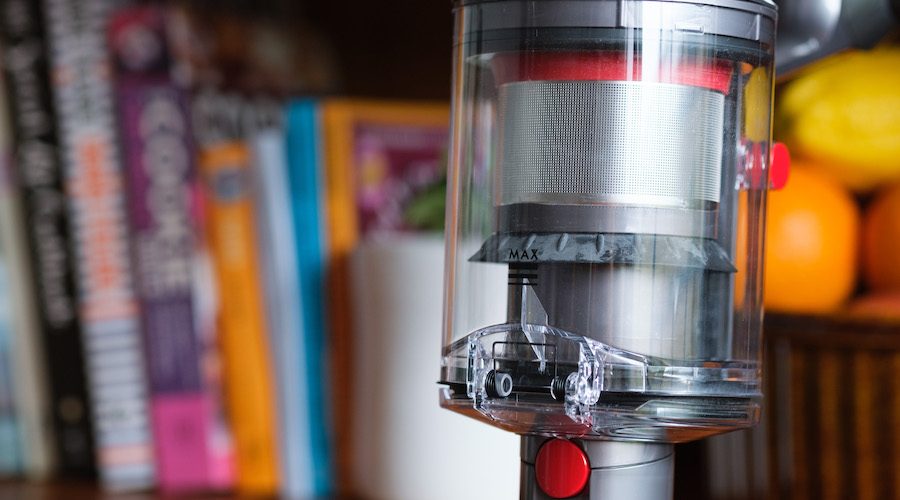 However, the petite size I've been praising does require that laughable 0.35L dustbin, which does need frequent emptying. Thankfully even when it was full the V12 still continued sucking dog hair and crumbs off my floor, leading me to believe it was doing a decent job of compressing the debris, but I still couldn't get through a whole-house clean without emptying it at least once.

Joyously, the battery provides enough juice to well and truly get through a whole house clean with 60 minutes on the battery-saving eco mode or 30 minutes on auto. This mode automatically adjusts power to effectively get the job done while maximising your cleaning time. I spend most of my time in auto and find it works great – although the intelligent switching can sometimes be a little delayed.

The battery takes a full 4 hours to charge, but given that you'll want to neatly put it away in the dock after use I never found myself high and dry.

The Dyson V12 Detect Slim doesn't strike me as particularly good value, though it is a beautiful and enjoyable machine. The compromises on bin size and suction power feel too much to justify such a small price reduction. In my mind, if you're looking to buy a $1,300 vacuum you can probably find another $200 in the budget for a V15, and you get a lot more for that $200.

I don't much like the idea of spending such an eye-watering amount on a vacuum for there to be tasks that I feel it can't do, like really intense cleaning. If it were my only vacuum I feel there would be times I felt things weren't as clean as I'd like.

However, the on/off button and reduced weight do make the V12 more usable and accessible for some people, and if you're those people then this is certainly one of the top offerings suitable for you.

The Dyson V12 Detect Slim was tested in a 2-bedroom, low-pile carpeted apartment inhabited by 2 long-haired people, a long-haired dog and a cat. Hard floors tested were tile (kitchen and balcony). It was also used for car cleaning. Testing was done over a period of weeks, with daily vacuuming (yes I vacuum every day and you should too).