What is Dynamic Currency Conversion?

Dynamic Currency Conversion gives you the option of making overseas card payments in Australian dollars, but it often costs more than paying in the local currency.

If you're using a debit card or credit card for overseas purchases, you could have the option of paying in the local currency or in Australian dollars. Choosing Australian dollars means the payment will be processed using Dynamic Currency Conversion (DCC) and you'll be able to see exactly how much is coming out of your account.

But Dynamic Currency Conversion does come at a price, with fees that typically range from 2% to 10% built into the total payment amount. There's also the potential of additional charges from your debit or credit card provider. So in some cases, you could end up paying an extra 13% on purchases made using DCC.

This makes it important to learn how DCC works, the fees involved and how it's different to a regular overseas transaction so that you can make the most of your money wherever you go.

Load and hold up to 10 foreign currencies at a time. Lock in exchange rates. Pay nothing for international ATM withdrawals.

How does Dynamic Currency Conversion work?

A major difference with DCC is that the merchant or the financial institution that processes the transaction sets the exchange rate. This rate is fixed and usually includes a margin percentage for both the merchant and the DCC provider – meaning they make a profit on each transaction processed. So even though you'll be able to see the exchange rate that's applied to your purchase, you usually won't know what margin percentage is included.

How much will Dynamic Currency Conversion cost?

As the cost of DCC varies and usually is not clearly shown on receipts, it's hard to give a clear figure of the exact costs. However, the fees charged typically range from 2% to 10% of the total transaction cost.

How is DCC different to payments made in a foreign currency?

When you use an Australian card to make payments in a foreign currency, Visa, Mastercard or American Express set the exchange rate that's used to convert it to Australian dollars. This rate can change on a daily basis and is only applied from the date that the transaction is added to your account.

So in most cases, you won't know exactly how much you've spent in Australian dollars until the purchase shows up on your account. While this type of currency conversion can make it hard to keep track of your balance, the exchange rates set by these card schemes are usually more competitive than the rates used for Dynamic Currency Conversion.

Most Australian debit and credit cards charge a fee worth between 1-3% of each transaction you make overseas or online with a retailer that's based overseas. Depending on your bank or provider, you could be charged this fee even if the payment is made in Australian dollars using Dynamic Currency Conversion.

What are the pros and cons of Dynamic Currency Conversion?

The only real positive to Dynamic Currency Conversion when you're travelling is that you will know exactly how much you're spending in Australian dollars. While this may be convenient for budgeting, the following factors usually outweigh this benefit:

Should I pay in Australian dollars or in foreign currency?

Dynamic Currency Conversion and payments made in a foreign currency both have their pros and cons when you're using a debit or credit card to make overseas payments. To help you decide between them, here are two different scenarios that show when each option is most useful.

Please note that these examples focus on exchange rates only and do not factor in foreign transaction fees charged by your bank.

Example one: Using Dynamic Currency Conversion to help you budget 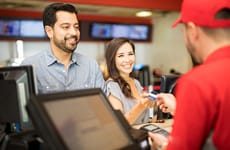 Let's say you're in New York and want to see three shows on Broadway. The total cost for the show tickets is US$350 but you only have AUS$400 in your Australian bank account and aren't sure if that will be enough.

Instead of trying to work out what conversion rate might be used if you pay in US dollars, you choose to pay for the tickets in Australian dollars. In this scenario, the three tickets cost AUD$440 and you decide to only go to two shows and pay AUD$295 for your tickets. This leaves you with another $105 of spending money.

By choosing Dynamic Currency Conversion in this scenario, you would know exactly how much the tickets cost and how much is left over. You would also avoid having the transaction declined if you'd tried to pay for the three tickets in US dollars.

Example two: Paying in a foreign currency to save on costs 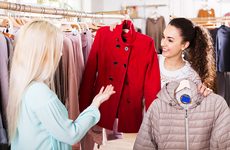 Say you're in London and see a jacket you simply have to buy. When you go to pay for it with your Australian Visa credit card, you're given the option of paying £120 or AUD$240.

In this case, you decide to pay in pounds. After 24 hours, the transaction shows up on your balance and you see that it was $208. This means you saved $32 by choosing to pay in the local currency instead of Australian dollars.

What other options do I have for making payments overseas?

If you want to avoid currency conversion costs or foreign transaction fees, compare these other travel money options:

While Dynamic Currency Conversion can be a convenient option if you want to know how much you're spending in Australian dollars, it is often more expensive than paying in the local currency. Plus, there's usually the added cost of foreign transaction fees, regardless of whether or not you pay in Australian dollars.

So before you head overseas or to the online checkout, make sure you weigh up these different payment options so you can choose one that works for you.

Amy is an editor and writer at finder.com.au with more than 10 years experience covering credit cards, personal finance and various lifestyle topics. When she’s not sharing her knowledge on money matters, Amy spends her time as an actress.

Was this content helpful to you?
Thank you for your feedback!
Jetstar drops its Travel Card Donate leftover foreign funds to UNICEF

Is Satoshi's dream on the way out, or is it more vivid than ever before?

This Jetstar sale has domestic and international fares from $45

Say g'day to your neighbouring states and islands.

There's nothing more Aussie than sitting with a Four'N Twenty meat pie to watch the AFL. Here's where you can catch it online in Australia.

Compare Coles and AAMI car insurance policies to see which provider comes out on top.

Your detailed review of the Paybis cryptocurrency exchange, including supported cryptos, registration, fees and payment methods.