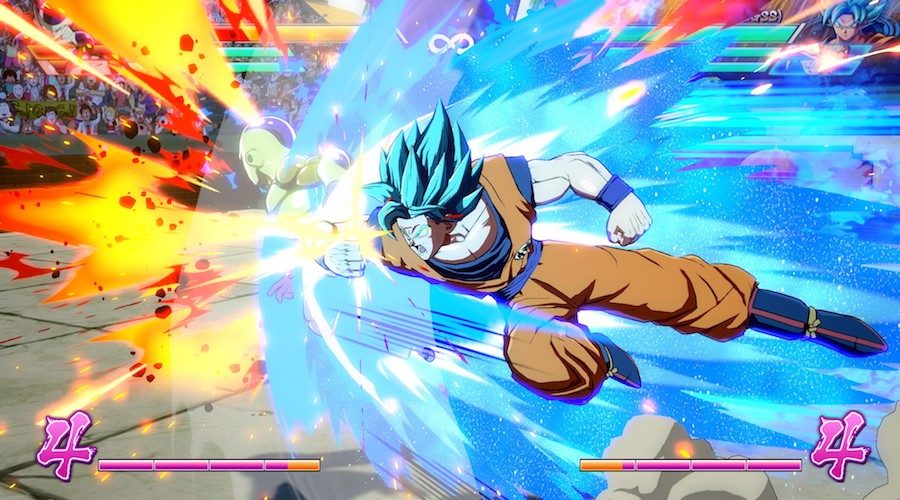 FighterZ tries the accessible route taken by Marvel vs Capcom Infinite and shows Capcom how it ought to be done.

Impossible physiques and fights that take weeks. This is the Dragon Ball formula we grew up with and it's finally been done justice in FighterZ. Arc System Works, long-time creators of cult-hit fighting games, has been handed one of the most beloved anime intellectual properties of all-time. It's a shot at the mainstream big time that's been belted out of the park and into orbit with a Super Saiyan uppercut.

If you're not into niche hardcore fighting games, you should know that the team at Arc has earned itself chops aplenty through the consistently excellent Guilty Gear and BlazBlue franchises. The team's considerable skills have been brought to bear in making FighterZ the first truly competitive Dragon Ball fighting game – a 2D, three-on-three extravaganza that's sure to earn itself a premier spot at fighting game tournaments like EVO. And, let's be honest, after the iffy showing made by Capcom with its Marvel vs Capcom Infinite, the timing could not be better for a fresh IP to step in and capture a new fanbase.

The first thing that'll hit you, like a right hook from Frieza, is how pretty FighterZ is. Using the best cel-shading art style I've ever seen in video gaming, Arc manages to blur the lines between 3D models and 2D characters. Remove the HUD in story mode and you'd be forgiven for thinking you're watching a remastered Blu-ray of some unaired season of the show. Utter reverence has not been lavished upon a piece of retro source material like this since PlatinumGames delivered the nostalgic injection to the eyeballs that was Transformers Devastation.

Throw in a bunch of flashy environmental effects, and the intensity of DBZ's spectacular ultra-violence becomes faithfully translated as well. Making your screen erupt in retina-retarding ways has never been easier, too, thanks to a bunch of simpler systems designed to lure in the casuals. If you know how to quarter-circle and hit a button, well, you've already got a foot and fist in the door with special moves that will zip you about the screen like a wire-fu stuntman on crack. Add two buttons, or a trigger, or a repeated mash of a light/medium/heavy attack to that d-pad motion and you'll be rewarded with a showy super move auto-combo. Likewise, problems of distance-to-target can be swept away with a Vanish function (read: teleport behind somebody) and a Super Dash that homes in on your prey like Amy Schumer on a baked ham.

Fireballs are even easier than your average Ryu-fest, too. Called Ki-Blasts, these projectiles can be peppered out in a low-level form via simple one-button machines of a Special Attack button. Build up your energy bar and add a d-pad quarter circle and you will unload a Kamehameha that eats up much more screen real estate. That's about it, really. No complex Zangief throws that require you to do 360 d-pad swirls that grate a skin layer off your thumb. No perfectly-timed back / forward or up / down charge attacks. It's all super approachable and flicking between any of the characters comes with few problems in terms of familiarity.

Of course, I'd be much more happy about that if there wasn't such a Majin Buu-sized hole in Dragon Ball FighterZ's roster to begin with. You're only getting Tien, Yamcha, Gohan (adult), Gohan (teen) Krillin, Goku (Super Saiyan), Goku (SSGSS), Frieza, Android 18, Kid Buu, Captain Ginyu, Nappa, Trunks, Vegeta (Super Saiyan), Beerus, Cell, Android 16, Vegeta (SSGSS), Gotenks, Piccolo, Android 21, Majin Buu, Hit and Goku Black. That's a bit on the stingy side, and only thirteen stages to fight on feels just as tightfisted.

View details
FighterZ looks the goods with its vulgar displays of power, but is there enough substance here to back up the style? The story mode certainly lives up to this, being an original tale of respectable runtime that resurrects all of your old favourites. It even casts you as a silent protagonist of sorts who, by some bizarre cosmic circumstance, finds themself co-inhabiting the body of Goku. Look, it's not Shakespeare by any means – it also drags a little in the middle thanks to repeated matchups against the same opponent and probably shouldn't have gone on for 10 hours. That said, the writing is easily on par with the TV show and fans will enjoy taking on the love-to-hate-her antagonist that is Android 21.

Though accessible and inclusive, there are depths to plumb in these fighting systems, too. The auto-combos of every character may start out feeling cheaper than a dollar shop closing down sale, but they may be swept aside if you know how to read them and time a shoryuken-style counter on down + Heavy attack. Also, manual combos dispensed by a master will always outstrip and out-manoeuvre the bashers. Advanced players can also waste many a happy hour nailing delays, counters and nasty final flashes that require frame perfect initiation. Plus there are a plethora of tactics to be milked from skilfully selecting and subbing your reserve fighters in and out.

Whichever way you size this fighter up, it represents the dawn of a new and exciting Dragon Ball era. In terms of fun-factor, visual spectacle and sequel potential, its power level is over 9000.

We reviewed Dragon Ball FighterZ on PlayStation 4 with a copy provided by the publisher.

FighterZ tries the accessible route taken by Marvel vs Capcom Infinite and shows Capcom how it ought to be done. It's an audio and visual tour de force that captures our beloved DBZ like no game before it. Expect this to be a tournament fave for ages.