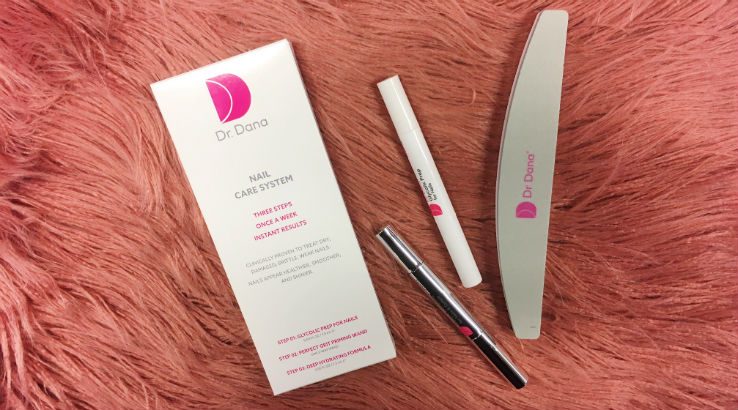 This nail treatment will stop your nails from chipping and will make your manicure last a whole lot longer.

Why we love this product

I gave up painting my nails about two years ago. Every now and again, I'll cave and put on a lick of polish. But one or two days later, I'll remember why I normally avoid nail polish.

My nails are brittle. They break, split and worst of all, they flake. One or two days into any manicure (whether self or salon), the top layer of my nail separates and flakes off, leaving me with a chipped manicure that looks like it's three weeks old. There's just no point in me taking the time to carefully apply two layers of polish, a top coat and waiting ages for it to dry, only to see a bunch of chips about 14 hours later.

But I actually may have found a solution. Enter Dr Dana's Nail Care System. It was created by dermatologist, Dr Dana who specialises in nail health. I was recently sent a product to try out and decided to give it a go. The system promises "healthier, stronger, smoother, shinier, glossier, and less brittle nails". With claims like that, why wouldn't you want to give this product a try?

The pack comes with three items, a glycolic prep, a nail buffing wand and a hydrating formula. The glycolic prep is the first step, it comes in a little twisty pen with a brush on the end. It took a fair few twists for me to actually see any product come out of the brush, but once it did, one or two twists gave enough product to brush over all 10 fingernails.

After the prep product has dried, you use the roughest side of the nail wand to file off any ridges or flakes on your nail. Flip the wand over and you'll see one end is a less gritty file and the other is for buffing. Use the less gritty file to finish removing any imperfections from the nail and then give each nail a quick buff.

Finally, use the second twist pen with the hydrating formula to finish off the treatment. Again, I needed a fair few twists of the pen to get the product flowing, but once the serum does come out, you don't need much to cover all your nails. The hydrating serum needs longer to dry than the first step, perhaps five minutes more.

The results are pretty instant. My nails looked immediately better. The buffing wand made my nails very shiny, as most buffing wands do. But it was the glycolic prep that really helped the wand lift off most of the flakes and ridges on my nails. The hydrating formula at the end was a nice touch and I definitely noticed my nails were much less brittle, even just an hour later.

I also really appreciated how quick, easy and mess free the whole process was. I used to use nail-hardeners in a polish form but gave up because you need a steady hand and 30 minutes to wait for it to dry. This whole process took me less than 10 minutes and the twist-pens with the brush-end made for a very mess-free experience. According to the instructions, you need to use this system once a week to maintain healthy nails and one pack is supposed to last around three months.

Three days on, my nails have not flaked at all. And although some might say this can be true of any nail buffing system, it's not for me. Last time I buffed my nails, they still started flaking and peeling one to two days later, like they always do. I was quite impressed with how well this system seemed to work for me. And I'm very happy to report that I've booked myself in for a manicure. I'm really looking forward to having chip free nails for the first time!

This pack is priced at $61. It's not as cheap as other products on the market, but overall I think the price is reasonable for a three month supply.

So when and where can you buy it?

Stay tuned to @finderstyle Instagram for more information on the best new launches, deals and news.