Out on the go? Why not do a bit of exorcise!

I was possessed by the PS4 incarnation of Doom. I'm not even kidding you. It was my demon for a time, an obsession that held me in thrall to the exclusion of all else, be it work commitments, family obligations or bladder responsibilities. That's the level of dedication this Beelzebub demands of you, if, like me, you hope to slay its nefarious Ultra-Nightmare difficulty (the mode that deletes your save file if you die). Understandably, being told to review this Nintendo Switch port made me nervous – like a recovering alcoholic asked to go live-stream Oktoberfest.

If you missed playing it in 2016, know that this Doom remake is a beast (and where the bloody hell were you?). Not only did it come with the most metal soundtrack since Brutal Legend, but it was a gore-smeared rollercoaster that rewarded players who could shoot skilfully in a series of interconnected arenas while running around like their very arse was on fire. It often was, too, thanks to swarms of highly agile imps who could lead their fireball shots with stunning accuracy. Forget hunkering behind cover. Forget pausing to aim carefully down sights. Standing still in Doom is signing your own death warrant.

There are slower moments, of course, when you're scouring labyrinthine vents in laboratories and spaceports for collectibles, but in combat, there are really only two momentary respites. The first is when you hold in a shoulder button to paint the weapon wheel on-screen and trigger a bit of slow-mo. Secondly, you can get a full two seconds of invulnerability during any melee glory kill animation (bonus: snapping necks and stomping faces causes a small health boost to pop from the bludgeoned corpse). Layer in a neat upgrade system that roids up your weapons if you can kill in specific ways, and Doom becomes addictive – fast. You may need an exorcist to pry the Switch from your hands.

Admittedly, the 13-chapter narrative won't win any story-telling awards, but it does capture the feel of the classic, eggheads-opened-a-portal-to-hell crisis. Instruction primarily comes from the architect of this mess, Dr Hayden, a transhuman and the head of the shady UAC. Additional exposition can be milked from intel pickups. Your space marine never utters a word, but he's the most expressively surly mute hero in all of gaming. He's basically pissed off that he has to clean up aisle 666 after everybody. Uncovering his true nature, and the reasons for this colossal shitstorm, are worth the slog.

It's worth noting that Doom's solo offerings have evolved a tad since its launch, thanks to four major patches. Minor bolt-ons include difficulty tweaks and the option to hold your guns in the centre position (like the 1994 original); major additions include the score-chasing spectacular that is arcade mode. In it, each of the existing stages can be played on any difficulty with all of your rune power-ups pre-unlocked. Fast clear times and maintaining a 32x combo meter is the aim of the game. Runs are brief. Lives are limited. Points are earned for headshots, scooping up items, or just expertly turning hellspawn into gazpacho smears via red barrel or mine explosions. Racking up the numbers earns medals and the chance to rub it in on the leaderboards. It's simple and perfect for on-the-go gaming.

Doom's somewhat misguided multiplayer mode was updated to version 6.66 as well. It is definitely in a better form than I remember, though it's still a bit ropey in spots. You're looking at twitch-killing that's more in line with arena shooters like Quake and Unreal Tournament than any modern specimen – you have nowhere to camp and you're constantly doing map laps, scrounging for health, armour and ammo. Whoever knows where all the good stuff is, and how to time when it respawns, will dominate the match. This is especially true with the all-powerful demon power-up that turns you into an eviscerating juggernaut for a time. 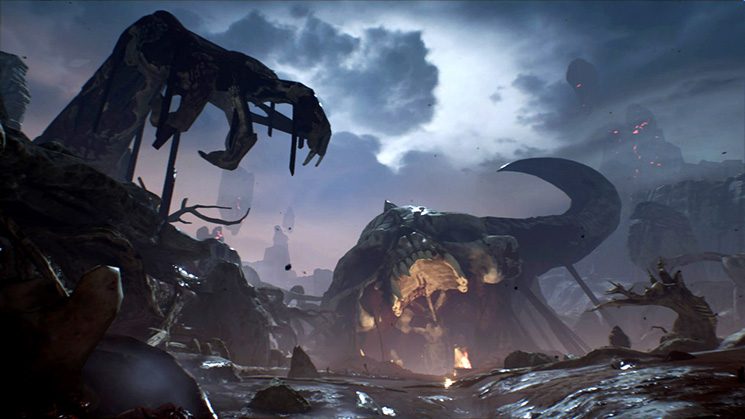 With a bit of levelling, you can earn the right to become one of eight increasingly deadly abominations, plus you can unlock meatier guns and table-turning secondary equipment to use across 11 modes. Bots are available, also, but only when you're online (a boneheaded decision for a highly portable machine). Beyond that misstep, multiplayer ran without issue for me, and though it's less polished than the Battlefields and Call of Dutys of the world, on Switch, it's pretty much the best FPS game in town. MVP by default.

Updates have also bolstered the already excellent Snapmap mode, too, a feature on the larger console versions that went well beyond mere map editing. Sadly, that “LittleDoomPlanet” has been unceremoniously ripped from this package like a cacodemon's eyeball. Players could have been given the tools and flexibility to create games within games: puzzle challenges, tower defence challenges, trivia games, music generators, farming sims, parkour runs and multiplayer racers. The possibilities could have been endless. It's a hellacious loss to this port. If I were a betting man, I'd say we got screwed because such freedom for players to create (phallus-themed levels) worried the brass at Nintendo.

Though Doom has lost one of its three major selling points in the translation process, this is still a damn fine addition to the Switch line-up. I do lament the loss of 60fps, and the drop to 720p, but I'm not unhappy with the visual squeeze-down that's taken place, though there are isolated framerate shudders in high-traffic scenarios. Texture quality and detail over distance had to take a hit to cram this beast down into 20 odd gigs. However, most of the time you're too busy hyperactively circle-strafing to drink in the details anyway. All that being said, this is now the best-looking and best-handling bullet ballet available on any portable device out there.

We reviewed Doom for Nintendo Switch on Ninendo Switch with a copy provided by the publisher.

Losing the ability to create and share user-generated content has seriously hurt the game's longevity, but the overall package isn't doomed. Solo offers everything from short bursts of fun, right up to long, intensely difficult sessions. Multi isn't best-in-genre, but it's a worthy interim king.

We've gathered up all the best prices on Doom for Nintendo Switch in Australia right here: