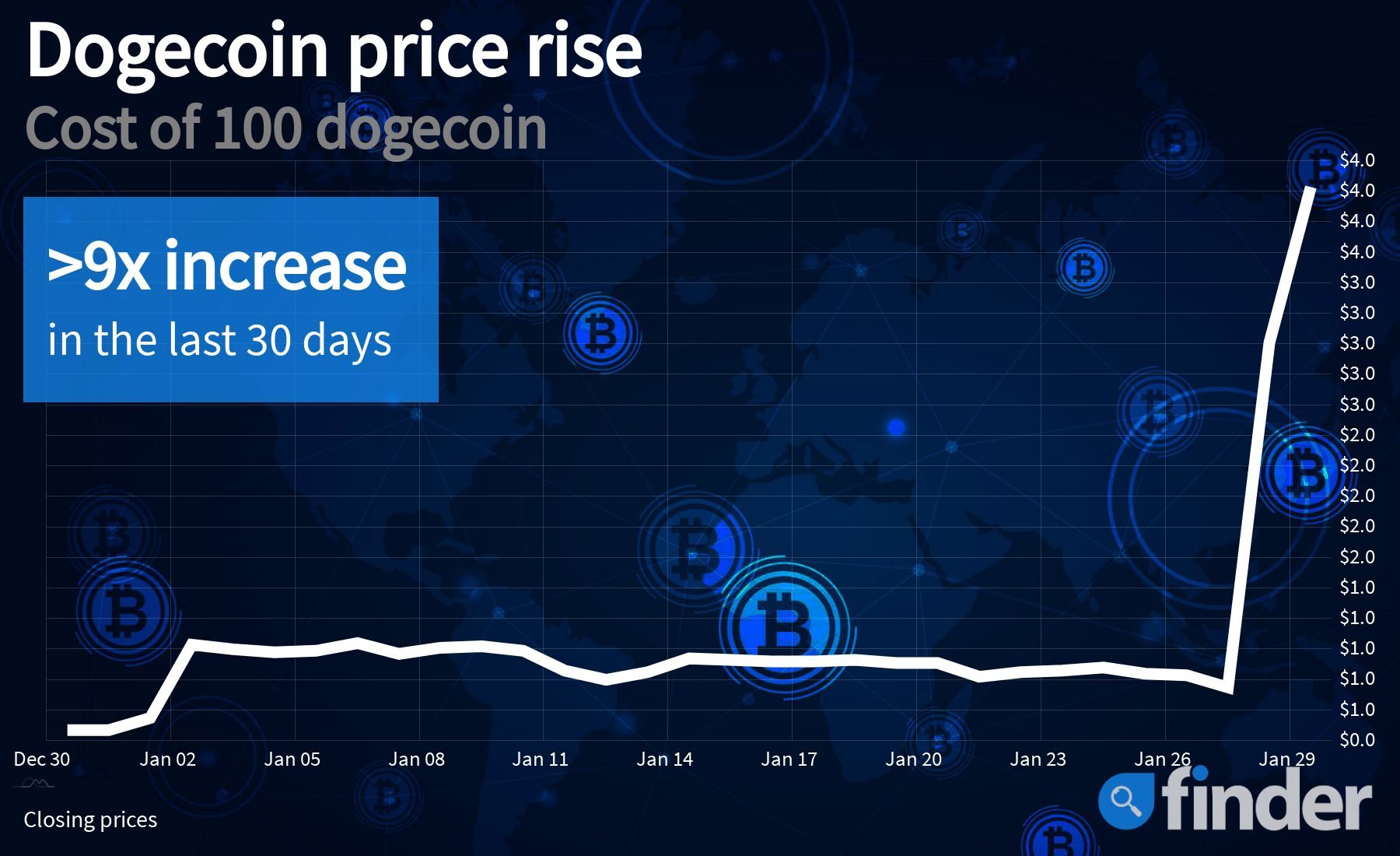 Yesterday's Dogecoin pump was of historic proportions, and suggests a turning point for the crypto markets.

Dogecoin (DOGE) was 17 times higher at its peak yesterday than the start of the year, making a molehill out of its once-mountainous 2017 highs. By the end of Friday it was still nine times higher, and was trading between four and six US cents overnight in Australia - a big increase from the half a cent at the start of this year.

It's reasonable, but not necessarily safe, to assume it will meltdown spectacularly at some point in the near future, and that most people buying it will lose money while a relatively small handful walk away with eye-watering profits. It's probably quite similar to Gamestop, AMC and Nokia in that respect, which is appropriate enough since they're all part of the same trend. Gamestop's stock soared more than 60% on Friday (after falling heavily the day before). The same was true of AMC entertainment, up 56% after Thursday's slump. (Prices correct at 5.15am AEDT on Saturday 30th.)

Elon Musk, the star of enormous valuations detatched from market fundamentals is an outspoken fan of DOGE, while the coin is also available on Robinhood which has found itself in the centre of this revolution.

Dog in the coalmine

There are several notable things about this pump.

Mostly that it's really, really big. DOGE went up several hundred percent in less than a day, riding on over US$40 billion in trading volume. It saw more volume than Ethereum yesterday, and almost as much as Bitcoin.

At the same time multiple exchanges and crypto apps have reported service interruptions and outages caused by overwhelming traffic and frenetic signups, suggesting that we're very much seeing an entry of a whole new wave of crypto participants on the back of the Wall Street Bets furore - Robinhood even restricted buying crypto.

Other metrics say the same.

Coinbase app reached its highest ever app store ranking, while other crypto apps are likewise seeing unprecedented growth spurts. Dogecoin itself also just set a new all time record for most-tweeted-about cryptocurrency, surpassing Bitcoin's old records which have stood since December 2017. Search interest in Dogecoin has also soared - Google searches in Australia are more than 100 times higher today compared with a day ago.

All in all, it's a stark show of just how much more mainstreet money there is punting stocks on mobile apps than there is in crypto even today.

Gamestop's market cap hit about $12.5 billion in its recent highs, far surpassing Dogecoin even at its peak. The price action we saw today is the result of just a fraction of that interest glancing at crypto. For all the growth over the last year, cryptocurrency is still a small fish.

If today's Dogecoin pump and all the other crypto growth metrics around it are saying anything at all (other than "such money, much wow" and so on) it's that things could be getting a bit crazy in the relatively near future.