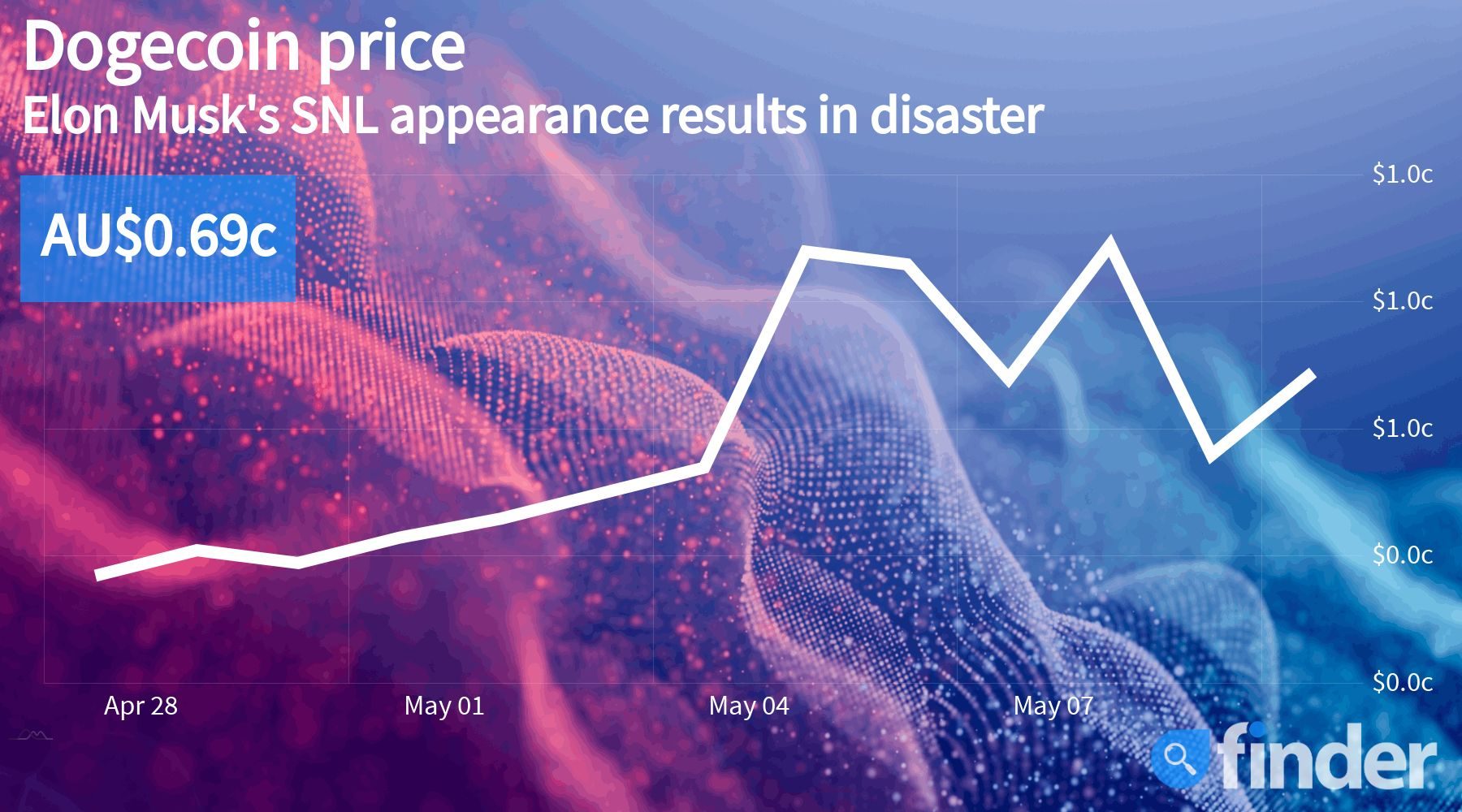 After weeks of anticipation, meme coin Doge finally got its moment of shine when Tesla CEO Elon Musk – aka DogeFather – gave a shout-out to the digital currency when he was guest-hosting the popular American sketch show Saturday Night Live (SNL) recently. However, instead of the currency's value surging, as many had expected, DOGE proceeded to dip hard minutes after Musk's appearance, dropping from AUD$0.88 to as low as AUD$0.66. At press time, the token is trading for AUD$0.52.

During the opening monologue, Maye Musk was seen jokingly telling her son that she hopefully won't be getting any DOGE as part of her mother's day gift bundle. Also, shortly after the aforementioned skit concluded, the Tesla CEO proceeded to make an appearance as financial expert Lloyd Ostertag, repeatedly referring to his character as the "DogeFather".

When asked by SNL regular Michael Che as to what exactly Dogecoin was, Musk – who was in character at the time – repeatedly deflected the question, talking about DOGE's history, token supply pool and other similar technicals rather than giving a straight answer. Eventually, when pressed further, he stated that DOGE was as real as the US dollar, even jokingly referred to the cryptocurrency as being a total "hustle".

The experts weigh in

Though Musk's appearance stands to bring more attention to the crypto sector as a whole, Finder spoke with Sebastian Bürgel, founder of Ethereum-based privacy protocol HOPR, about DOGE and what the future may have in store for the asset.

In his view, DOGE has made a serious name for itself in recent months and will most likely go down in crypto history for being the token that started off as a little joke but has suddenly transformed into a serious project – thanks, in large part due to Elon Musk's constant online nudges and Twitter affirmations – adding:

"DOGE used to be this fun little thing that people like Vitalik supported for the lulz but that fun factor suddenly became very serious with Elon Musk actively influencing its price via Twitter. I'm certain it's just a matter of time until the bubble bursts. There's no utility there, just an empty – albeit fascinating – game of investment chicken, with everyone waiting as long as possible before cashing out."

Lastly, in his view, even though DOGE may be flying high right now, all those who have invested in the cryptocurrency need to realise quickly that the token is meant to be a joke and that it is "not based on any real innovation".

As pointed out earlier, soon after Musk's appearance on SNL, DOGE's value dumped by a whopping 25% within a matter of minutes. However, subsequently, the token began on its path of recovery, currently showcasing a 24-hour profit ratio of over 2%. However, with an increasing amount of uncertainty surrounding the meme coin at the moment, it remains to be seen whether the digital currency can reclaim its all-time high value of AUD$0.93 any time soon.