Expose your products to a wider customer base with a distribution agreement.

When a business that creates its own products wants to accelerate its growth but can't attract new customers fast enough, it can start selling to distributors. Distributors purchase large quantities of products from a supplier to on-sell to their own customers to make a profit. A distribution agreement makes this possible.

What is a distribution agreement?

A distribution agreement is a legal contract that grants rights to a distributor to sell the products of a supplier. This arrangement is known as a distributorship.

The purpose of a distributorship is for a distributor to sell on products purchased from a supplier to its own customers under its own branding to make a profit (arbitrage).

A distribution agreement enables a supplier to sell a higher volume of product and a distributor to increase its product selection without doing any R&D or manufacturing. 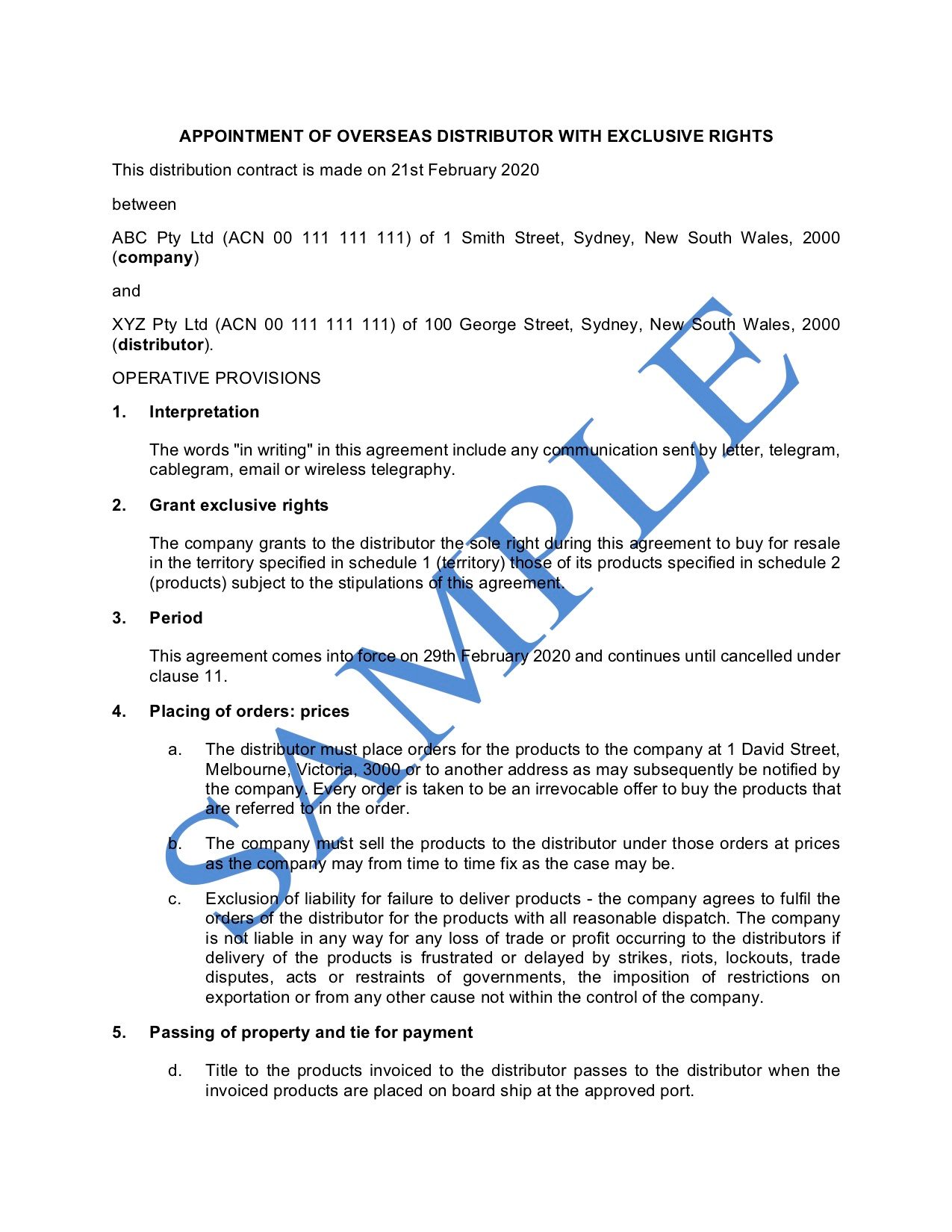 When should I use a distribution agreement?

A distributorship exposes a supplier's products to the customer base of a distributor.

A supplier might not earn as much profit per unit sold to a distributor. However, sales to a distributor are in addition to sales made by the supplier directly to its other customers. A distributorship enables a supplier to earn a larger total profit.

Like a distribution agreement, an agency agreement grants an agent the rights to sell a supplier's products.

Additionally, the agent doesn't buy the products from the supplier. The agent receives a commission for each unit of product that it sells.

What does a distribution agreement include and not include?

What is included in a distribution agreement?

What not to include in a distribution agreement

How effective is a distribution agreement?

A distribution agreement can contain penalties for either party not adhering to the terms of the agreement which can be legally enforced.

Do I need a lawyer for a distribution agreement?

You can write a distribution agreement yourself. However, the agreement must be fair to both the supplier and distributor to foster a long-term, mutually beneficial business relationship. The goal of a distributorship is a long-term collaboration.

How do I write a distribution agreement?

Every distribution agreement includes the following.

These are some places to get a distribution agreement template to get you started before consulting a legal professional.

Jon Holstead is a writer at Finder. Jon has previously written for CodinGame as a tech expert and for CGS as a business thought leader. He started his career in technology by earning a computer science Bachelor of Science degree from Durham University, UK. Jon has since built a short-term rentals business, a property acquisition company, and a business blog that teaches aspiring entrepreneurs about business and investing.