Destiny 2: Curse of Osiris review – A curse by name and by nature

Bungie has dropped the giant grey Traveller ball here, in a big way and at the worst possible time.

Bungie's been in the dogbox of late and that's never the best position to be in when you're launching the first major expansion pack for your game. Long story short: eagle-eyed fans noticed some behind-the-scenes throttling was going on – discrepancies between the XP being reported on-screen compared to what was actually being banked into player profiles. It was, undoubtedly, Activision's Battlefront II moment of 2017. And though Bungie took a step forward to quickly fix its design, it managed to take one giant step right back again when Curse of Osiris went live...

All of a sudden, players of the vanilla Destiny 2 experience discovered that activities they'd long-since enjoyed – prestige Nightfalls and prestige Raids – were locked from them, as the requirements to enter had increased thanks to Curse of Osiris raising the max power level from 300 to 330. Curiously, the new Heroic Strikes (comprised mainly of old content) were also locked to these unfortunates, even though the entry requirement was a paltry 270. That playlist being sprinkled with new strikes is obviously the reason why, but it sure wasn't communicated well and the backlash has been pretty intense. And not introducing new trophies and achievements with this expansion pack is just the cherry on top of this big cake of bad ideas.

Curse of Osiris doesn't look very good on paper, but does it improve when you transmat in and sparrow right into the guts of it? Yes and no. Overwhelmingly no.

First of all, the titular Osiris is a major figure in the Destiny universe, a legendary guardian who's constantly mentioned and has his own elite mode dedicated to him, though he's never been seen. That said, his long-anticipated reveal goes off with a half-hearted pop here. Over the course of three-ish hours worth of story, you'll deal with Vance, Osiris's fanboy follower, more than the big dimension-hopping cheese himself. And when your quest to prevent apocalyptic Vex timelines ends – rather abruptly, after killing a boss enemy that's not so much a worthy nemesis as it is a larger, more triangular thing with a bigger glowing weak point – the dissatisfaction is palpable

It's such a pity as Bungie's talented level designers deliver some of the prettiest (and starkly desolate) playspaces with their reimagining of the planet Mercury. One high point is whisking back in time to an idyllic moment when this sun-blasted hellscape looked like a technicolour wonderland ripped out of a Dr. Seuss storybook involving Thneeds and Loraxes. However, it flits by in no time and then you're stuck with the overly-yellow-looking Infinite Forest environment that's incredibly finite. These places are filled with the usual stone-meets-tech motif we've become bored with since the first Destiny game. There is a degree of randomness to them, but the variations in level tiles and enemy placement you'll see are nothing to postmaster home about.

The bulk of your time will be spent trying to forge a handful of unique weapons in the grindy pursuit known as Lost Prophecy Verses. For example, the first requires you to do 20 public events. Don't think 20 is busywork? The next weapon after that asks you to do 60. Oh, and the gats you're chasing are basically fancy reskins of existing weapon archetypes (or guns from Destiny 1). Speaking of retreads, there are some cool exotics reintroduced from the last game but, as seems to be the case with exotics, in PvP they're more or less inferior to a small pool of legendary weapons that offer better time-to-kill ratios. 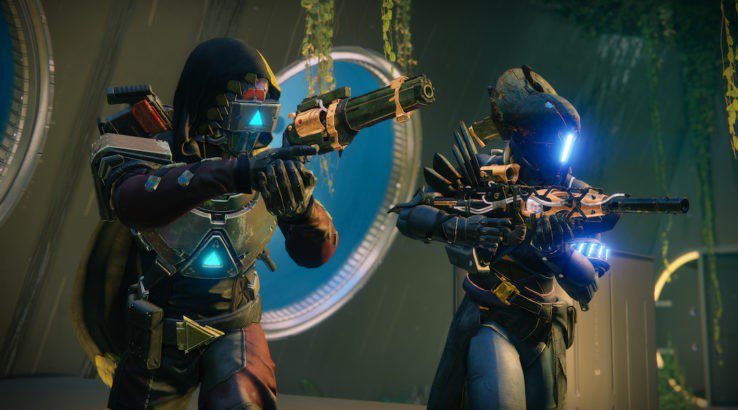 Beyond that, there's not much else of note in this expansion pack. The aforementioned heroic strikes are back from the original Destiny but, aside from putting the existing enemies on steroids and having better engrams pop at the end, no real thought has been put into making these strikes uniquely challenging. The two genuinely new strikes – A Garden World and Tree of Probabilities – are great bits of content, but you'll tire of them quickly. Same deal with the new multi-part public event, Vex Crossroads (set in a public space that's the size of a Crucible map and offers one lost sector). And you'll (literally) burn-out just as quick with PvP thanks to a glitch that makes the face-melting Prometheus Lens laser about as fair as a nuke from orbit.

You veterans who are keeping score will remember that Destiny 1's first expansion, The Dark Below, came with its own fully-fledged raid content. Osiris lowers the bar considerably thanks to a “Raid Lair” that shares the same motif as the current raid, but it does offer tough new challenges, tricky puzzles, high-level loot worth chasing and a worthy boss encounter. Mind you, you can knock it over in 30 minutes, blind run.

Unfortunately, the Raid Lair is just about the only worthy feature going in Curse of Osiris. In terms of execution, Bungie has dropped the giant grey Traveller ball here, in a big way and at the worst possible time. This expansion is without a doubt the worst offering on record for this franchise. Here's hoping Bungie can return to the highlights we witnessed in The Taken King. If not, Destiny 2 will be consumed by the darkness in no time.