What to do, where to stay and when to go to Tasmania's biggest city.

Hobart is one of Australia's most underrated cities. Brimming with historical landmarks, iconic markets, dynamic coastal views and a world-class art museum, you could spend a weekend in town or a week travelling the island state and not get bored easily.From Hobart, day trips can be made to the historical Port Arthur site or the local beaches such as Sandy Bay. Or, you can hop in your car and drive the coast up to Freycinet and its bevy of lauded beaches including the famous Wineglass Bay.

Feeling adventurous? Tasmania is home to hotly popular walking tracks that trail through rugged terrain and skim along the coastline. Try the Three Capes Walk on the south eastern end of the island or go north to hike your way up Cradle Mountain.

There are daily flights to Hobart from major Australian cities and the airport is serviced by both low-cost and all-inclusive carriers, making it an easy and budget-friendly option for Aussies searching to explore their backyard.

Find the best time to explore the Tasmanian capital based on weather, price and activities. 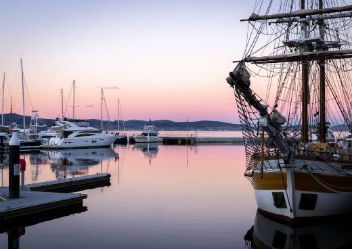 Flying to Tasmania? Here's everything you need to know before booking flights to Hobart. 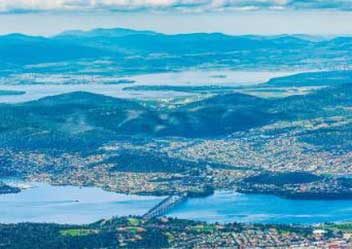 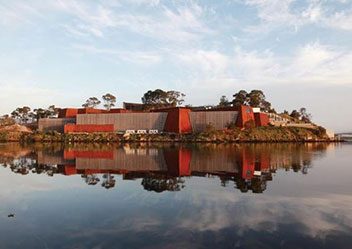 Find the perfect Hobart accommodation for your Tassie escape. 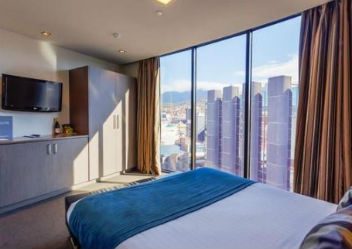 Starting a Tassie road trip or looking to explore outside the city?. 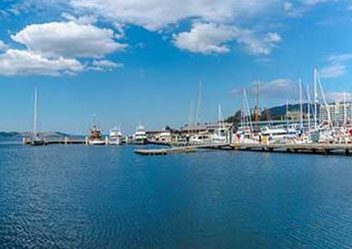 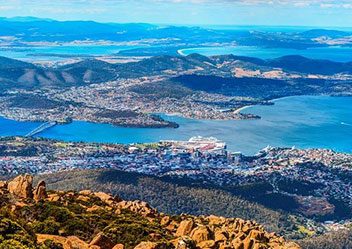 What's there to do in Hobart?

Foodies, history buffs and nature lovers will be of no shortage of things to do in Hobart. Nearby Mount Wellington provides hiking trails and stellar views of Hobart and its surrounds, while Salamanca Markets is a must for any food-lover.

If you have a few days or more in the city, it's also the perfect stepping stone to some of Tasmania's most beautiful and historic sites. Port Arthur is within a scenic 90-minute drive of the city and along the way you can take in the beautiful rugged coastline or extend your stay and join a ghost tour. Bruny Island, which sits south of the city, provides abundant wildlife, fresh food and some of Tasmania's best scenery including beaches and sea cliffs.

While there's plenty to do in the city itself, to truly experience Tasmania, it's best to hop in a car for a road trip and explore the island over a few days. (Just make sure your adventure is covered before you hit the road.)

Many of Hobart's attractions are located in the city centre, which is small enough to be covered on foot. It's also a bike-friendly city, so you can cycle around quite easily.

Attractions such as Salamanca Market, the Tasmanian Museum and Art Gallery and Constitution Dock are all located along the harbour just a short walk from each other, and are minutes from the CBD.

Mt Wellington is situated west of the CBD and offers panoramic views of the city. Although you could walk to the top, it's quite a trek so it's best to visit by car or take a city bus.

Another hot attraction, MONA (Museum of Old and New Art), is a 20-minute drive north of the city. If you don't have car, buses depart regularly from Hobart City Interchange to the gallery and a ferry departs regularly from Brooke Street Pier in Hobart.

Types of transport: A bus network known as Metro operates in and around Hobart. There are also a few ferry services that can be used as an alternative to buses for some routes.

Paying for transport: The Greencard is Metro's smart electronic card. It is easy to use and allows you to save 20% on bus tickets throughout the city. The card can be recharged online, on the Metro bus, at Metro depots, using the Metro App or at Greencard agents. You can find more information about the card here.

Getting to and from the airport: There is no direct public transport from Hobart airport to the CBD. The nearest bus stop is half a kilometre away. Taxis and the Tasmanian Red Line City Hotels shuttle bus are the most convenient options for getting into the city.

Best apps for getting around: Metro Tasmania is a useful app which allows you to plan your trip, recharge your Greencard and locate buses using your phone.

Where is Hobart Airport?

Hobart Airport is situated at 6 Hinkler Road, Cambridge, Hobart, Tasmania. The airport is roughly 17km north-east of the city centre and is the major passenger airport of Tasmania.

Does Hobart have rideshare?

At the moment, the only ride share service available in Hobart is Uber. Ola, Didi and Bolt (Taxify) are yet to launch in the city.

How far is it from Hobart to Launceston?

The distance between Hobart and Launceston is approximately 198km, which equates to around two-and-a-half hours on the road (without traffic). Launceston is Tasmania's second-largest city and offers an exciting array of food and wine, culture and nature.

Up to 40% off last minute Australia stays

Available on select dates from April - November 2020. Sample fare is Hobart-Melbourne with Jetstar. Other flights depart from Adelaide, Sydney, Gold Coast and more.

Available on select dates in 2020. Sample fare is Melbourne-Adelaide with Jetstar. Other flights depart from Cairns, Hobart, Perth and more.

Veronica is the publishing support lead for travel at Finder and has been scouting airline, hotel and tour package deals for over five years. She has a Bachelor of Tourism major in Travel Management from University of Sto. Tomas Legazpi, Philippines and has been a local tour guide. She does her own itinerary and budget research every time she travels and has mastered the art of packing light for her family of three.