Quick verdict: It grills, it fries, it ovens, but not as well as an oven or stovetop. A decent option if you can’t fit a kitchen in your student accommodation or caravan, but not worth the bench space in a decent kitchen, and not as capable as other multicookers. 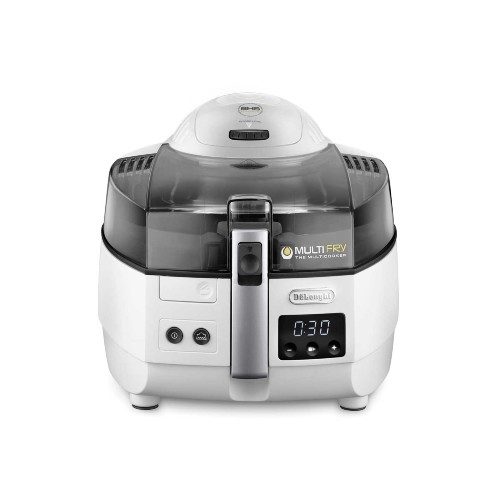 A multicooker is one of those things that sounds great in theory, and can be great in practice. Having used many multicookers in my time, I've really enjoyed how they take a lot of pressure and workload off you by doing the chopping or stirring. But while the De'Longhi Extra Chef can stir, it requires more babysitting and interaction than other multicookers. At $479, it's just $120 away from the Tefal Cook4Me, which does more things, faster and better, if you're willing to trade the air frying function for pressure cooking. 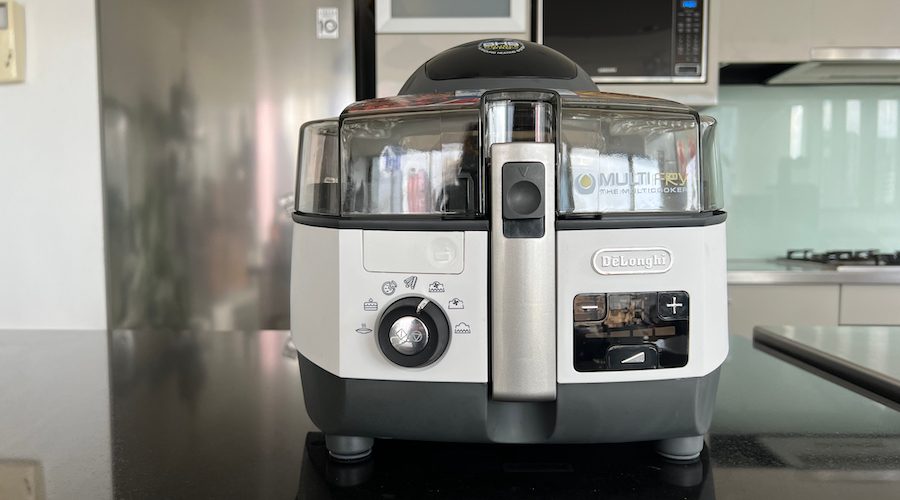 Where the De'Longhi IdealFry leaned into the Darth Vader helmet aesthetic, the Extra Chef is what would happen if a Storm Trooper helmet was also a Formula 1 car, but more plastic. For $479, I really would have expected a better design than this. This would stand out like a sore thumb in a contemporary kitchen, but it would look at home in a caravan, which is a better home for this device anyway.

I will give bonus points for the foldaway handle, though – that's a pretty neat design feature.

At 39.5cm wide, 32.5cm deep and 29cm tall, it is a kitchen-bench-hogging beast that can only hold 1.5kg of sliced potato, which is an odd way to measure volume. It could comfortably house a full dinner for 3 people, but would struggle with 4 hungry people wanting a full meal.

I do like that the lid is see-through, so you can gaze upon your meal or snack as it undergoes the cooking process. I also like the little rubber suction cup feet that stop this mid-weight device from shifting around the table.

The controls consist of a dial to choose the cooking setting (with 7 to choose from including cake, pizza, chip and grill), an intensity button (with 4 levels that cycle through) and time up and down buttons. I appreciate that they went for a dial and physical buttons over capacitive touch, but I still would have preferred a time dial. Why have a dial for 7 cooking methods and then up and down buttons for 99 units of time?

The pan certainly lives up to its non-stick promise and is easy to clean. Given this would be a fairly extraneous device in a traditional kitchen, its main usage scenarios probably don't include dishwasher access, yet still it is dishwasher safe, which I greatly appreciate.

The IdealFry on the left clearly looks more golden brown, while the Extra Chef on the right took twice as long to end up less dehydrated, but also less crispy, while looking pale and sad. Image: Alice Clarke/Finder

Performance-wise, I was largely unimpressed when directly comparing it to the De'Longhi IdealFry, which I was reviewing at the same time. The IdealFry air fries food much more evenly, and much faster. I had multiple occasions where the Extra Chef had the chips or chicken nuggets clump in the one spot, fused together in a Voltron lump of dehydrated disappointment. Also, there isn't a chicken setting, leading to guess work.

Every time I went to make a meal in it, I would just look over at my stove top and pots, which would have been much easier to cook in, with more room to move and more control over the cook. But even if I didn't have access to a stove, I think I'd be longing for the Tefal Cook4Me instead. Sure, the Extra Chef can give you some disappointing air fried chips, but the Cook4Me can give me risotto in 12 minutes, and I know which I'm picking out of the two.

If this is all you have access to, you can make a great meal, and I'm sure you'd adjust quickly to the challenges presented and learn the quirks of the machine. But I don't know why you'd do that if there were other options available. Even a slow cooker with a grilling function would be better.

In good news, though, there is the De'Longhi recipe app that has heaps of recipes tailored for the Extra Chef, and some of them are really tasty (the carrot soup is particularly delicious).

I really wanted to love the Extra Chef, but there's just better out there without too much of a price difference. It's perfectly capable of doing the job, there's nothing overly wrong with it. It's just not as good as it could be.

If you were given one as a gift for a caravan, university dorm or granny flat, you'd probably really enjoy it and get a lot of use out of it. But it wouldn't be my first choice, or perhaps even second.