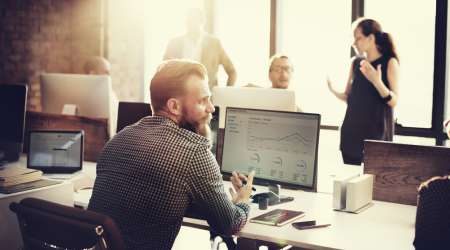 Fintech companies want your Internet banking logins. Banks don't want you to give it to them. Find out why the answer isn't as simple as security.

The issue of data crops up time and time again in the fintech market. Whether it's the banks not sharing their data, fintech companies not providing enough protection of the data they're asking for, or discussion of the myriad data that waits to be taken advantage of by fintech opportunists.

With data being such a hot commodity, it should come as no surprise that the only thing that is not happening with data is sharing.

In a recent article in the Australian Financial Review, investment company Acorns accused ANZ, among other banks, of telling its customers not to share their passwords with the fintech. Unfortunately the issue is all too familiar in the space.

As a financial comparison and information service, finder.com.au receives numerous questions regarding the sharing of information with companies. Similarly, on forums such as Whirlpool, you'll find threads of warnings from misinformed consumers, some who were informed as such from their banks, who are telling others not to share their banking details under any circumstances.

Data as a commodity

The problem is not a lack of data – there is plenty of data out there. The issue is being able to get data from consumers or to be able to get it from banks. After getting over that hurdle, the way forward for a lot of fintech companies is to use data to make more intelligent decisions for consumers using technology.

In some ways, the banks are helping. They are partnering with fintech companies and pouring money into innovation labs and blockchain research. But in the area of data, they are hindering.

They are more than sluggish when it comes to taking part in comprehensive credit reporting, which has been more than disappointing to lenders.

Cameron Dart, co-founder of Australian FinTech, believes there needs to be more consumer education when it comes to handing over logins.

"The banks – and many media outlets – put a lot of fear into consumers regarding security and privacy. Are the scare tactics necessary? Probably. Are they over the top? I think so. If the fintech company is established and reputable then there shouldn't be an issue," he said.

Dart went on to explain some of the hesitation may stem from the nature of data being sought by companies, "Some fintech companies require information that the average person wouldn't want to divulge so I can understand the reluctance."

Lenders offering small amount credit contracts (SACCs), or loans under $2,000, were some of the first lenders to leverage services such as Yodlee and Credit Sense. Both are third-party companies that give, with permission, read-only access to financial statements, the former originating in the US and the latter being Australian. The process can be completed in seconds and can give the lender a way to confirm income and expenditure. It's easy to understand the lure for payday lenders.

Payday loan borrowers often need money quickly as the loans are taken out for emergency purposes.

One lender that makes use of Yodlee is Nimble. According to a Nimble spokesperson, "As a fintech company, we’re embracing online opportunities to provide a better service for our members that is both more convenient for them and more comprehensive in terms of our credit decisions."

Nimble uses Yodlee to undertake the majority of its account checks, but this is only after receiving the consent of the borrower.

"All our members are made aware of how the Yodlee service works. It is only used with their express consent and all information is obtained on a read-only basis."

Borrowers are given the option to submit account documents through other means but are warned the application will take longer.

This means of application, that is, via Yodlee or Credit Sense, is the norm for alternative lending providers but largely unheard of in the traditional lending space. Not only this, but banks have specifically told their customers not to share logins with fintech companies. As is the case with Acorns, the company said it had evidence that ANZ advised its customers not to share their passwords.

If you check with your bank you are likely to receive varied responses, depending on who you bank with. CommBank, NAB and ANZ have reportedly hardline responses while Westpac has been said to be more lenient about password sharing with fintechs.

In terms of legalities, it all comes down to the Australian Securities and Investments Commission (ASIC) ePayments code. The code says that you're able to give your details to a third-party aggregator service that is explicitly or implicitly endorsed by the bank. At the moment, ANZ uses Yodlee for its MoneyManager services, but the other three major banks do not. However, Yodlee is not a new company is any sense of the word. It has been operating for the past 16 years and is currently used by 12 of the 20 largest US banks.

Comparing the US and Australia when it comes to data – credit reporting, the embracing of aggregator services such as Yodlee – it seems Australia has a fair way to come. With fintech companies biting at the heels of banks, that path may be shorter than previously thought.

In its latest push for increased data sharing…

The peer-to-peer and payday sectors are…

The biggest opportunities for Australian fintech

With the push for fintech, where do the…