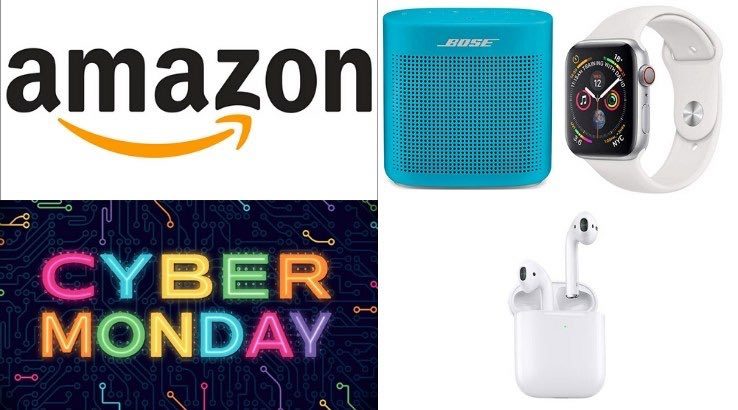 Amazon has again delivered with a huge Cyber Monday sale. From AirPods to smartphones and speakers, there are tech gadgets for everyone.

Amazon kicked off several days of massive shopping deals with its huge Black Friday event. Now they'll follow it up with Cyber Monday. There are big specials to be found on the Amazon site, including popular tech items such as AirPods, mobile phones, headphones, Apple Watch and speakers.

While Black Friday delivered us eBay's huge members-only $99 AirPods, many missed out. It was reported that it took just 36 seconds for the earphones to be snapped up. Fear not though, Cyber Monday is here and you can still score some cheap AirPods.

Amazon has gone and dropped prices on both its OG Apple AirPods and 2nd Gen with the wireless charging case. The two sets of AirPods have been slashed by 20%, dropping the prices to $199 and $239 respectively.

That's set to be music to the ears of Christmas shoppers, pun intended. AirPods have sent people into a frenzy ever since their release, so you can be sure that they'll be on somebody's Christmas wishlist that you know.

Plus a few of the biggest tech retailers are already out of stock. So act now or you'll run the risk of missing out.

Amazon is also advertising 20% off the iPhone 8 256GB version, which Amazon is advertising as one of their deals of the day. While there are obviously newer models available, this one can still do the job perfectly.

Keeping up with the clearance of slightly older model phones is the Google Pixel 3. Again, there's a 20% discount being offered on the smartphone.

Outside of the AirPods, the more traditional headphones are also available. There's a massive 38% off the Jabra 85H noise cancelling headphones, which is another one of Amazon's top deals.

Once again, an advertised deal of the day belongs to another Apple product. This time, it's the Apple Watch. The Series 4 is on sale for $638, which is 18% off the regular price. That's not the greatest reduction, but that's often the case on many Apple gadgets.

There's a bigger 27% discount on offer for the older Series 3, which drops the price down to $357.

If you want your music to be loud and heard by everyone rather than just yourself, you'll need a speaker. Bose's SoundLink Colour Bluetooth Speaker II can be purchased for a mark down of up to 29% off. The discount here depends on the colour you're after.

So head on over to Amazon and find yourself a bargain.