For a purely digital asset, it can be surprisingly tough to get reliable figures on bitcoin.

The cryptocurrency markets are going through a squeeze right now, not entirely unlike an industry trying to get back in shape after a year-long hype-fuelled bender. 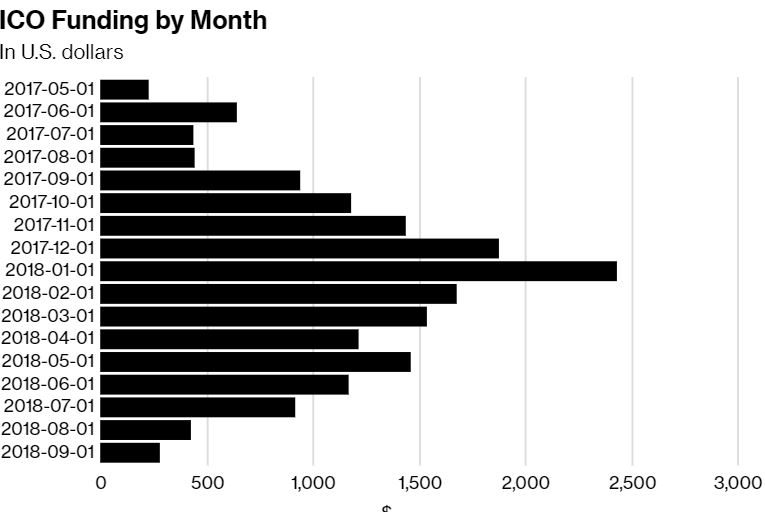 But hey, it's easy to skip past $500 million here and there. Speaking of which, EOS' fundraising was quite reasonably excluded from these figures.

Either way, it's clear that ICO fundraising volumes have downshifted quite dramatically, especially in the last few months. Bloomberg suggests the downturn might be partly due to the SEC's relatively recent clarification that ICO tokens are securities, and as such must be appropriately registered and legally compliant.

It also points out that savvy investors may be switching to equity purchases rather than buying tokens, and that the ongoing rise of security tokens is likely to take a considerable piece of the ICO pie.

Also, ICO token sales are typically conducted in exchange for bitcoin, Ether and other cryptocurrencies, so as prices have continued dropping throughout the year there's simply much less being invested in ICOs on paper. An ICO might have raised $10 million in January, but its funding is only worth $5 million a few weeks later. This might be a major contributor to the apparent drop, while also making it tough to get precise figures.

Beyond reduced ICO fundraising, Bloomberg also points at the continuing all-around cryptocurrency market contraction, which it dramatically describes as "on the brink of an implosion".

"Industry bellwether Bitcoin had seen its daily transaction volumes fall from an average of around 360,000 a day in late 2017 to just 230,000 in September 2018. Meanwhile, daily transaction values were down from more than $3.7 billion to less than $670 million in the same period," it reports.

"The market as a whole has contracted quickly as well. In the first quarter, cryptocurrency transactions totaled just over $1.4 trillion, compared with less than $1.7 trillion for 2017 as a whole, Juniper said. However, by the second quarter, transaction values had plummeted by 75 percent, with total market capitalization falling to just under $355 billion."

But it's once again difficult to separate these figures from bitcoin's price decline. A look at average daily bitcoin transactions, rather than transaction value, actually shows it trending upwards throughout the year after hitting lows of about 170,000 per day in April.

However, it's still running well below the 2017 average. Although a large part of this might be accounted for by batching – the practice of sending transactions as one chunk to save on bitcoin transaction fees, rather than splitting them up as individual transactions.

As bitcoin fees skyrocketed to extreme levels in December-January, rising from an average of dollars or cents to jawdropping figures as high as $50, exchanges were forced to implement batching posthaste. Transaction fees later dropped again, but batching remained. So the actual number of transactions is much smaller now than 2017, but it doesn't necessarily reflect a loss of interest.

It might be quite reasonable to ascribe the bulk of the difference between 2017 and 2018's average transaction numbers to batching rather than a decrease in bitcoin interest between then and now. Bitcoin's daily transaction figures are quite tiny, at only a few hundred thousand, so a few thousand transactions being batched when they didn't used to be is enough to skew the measurements significantly.

Bitcoin is definitely less frenetic than it was in December-January, and its prices and value-wise transaction volumes are certainly much lower than they used to be, but that's not much of a revelation.

"In short, given our concerns around both the innate valuation of bitcoin, and of the operating practices of many exchanges, we feel that the industry is on the brink of an implosion," Bloomberg quoted Juniper Research as saying.

For a fun game, try substituting the word "bitcoin" in Juniper's quote with any other shiny object that's attracted human attention throughout history. Like so:

"In short, given our concerns around both the innate valuation of diamonds, and of the operating practices of many exchanges, we feel that the industry is on the brink of an implosion."

"In short, given our concerns around both the innate valuation of gold, and of the operating practices of many exchanges, we feel that the industry is on the brink of an implosion."

An analysis of historical trade data suggests that gold has been in a bubble for the last few thousand years. Surely that means it could burst any time now.

"In short, given our concerns around both the innate valuation of rhino horns, and of the operating practices of many exchanges, we feel that the industry is on the brink of an implosion."

The illegal rhino horn industry has never been better. It has grown by 8,000% in the last 10 years, primarily due to massively increased demand from China's increasingly affluent population. However, some people are concerned that the industry isn't operating to a high ethical standard, that illegal poachers lack proper licensing and regulatory oversight, and that the innate value of a rhino horn might not be enough to support its current valuation.

Analysts warn that the illegal rhino horn industry might be about to implode, and that ivory has all the hallmarks of an economic bubble.

Bitcoin is a natural aphrodisiac, and some schools of traditional Chinese medicine hold that it's a magical cure-all for a wide range of ailments.

Disclaimer: This is neither medical nor financial advice, and may or may not be factually accurate.