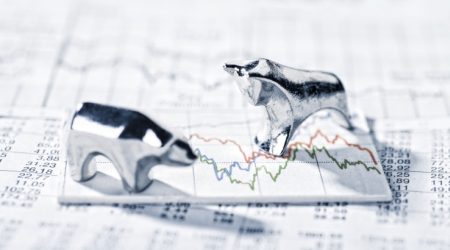 Markets are seeing gradual growth across the board today.

Gains are modest, with TRX, XEM and MKR being the only coins from the top 25 to boast gains above 5%.

Yesterday we brought you news that Binance Coin had surpassed the market cap of Ether Classic as well as NEO, to become the #14 largest coin by market capitalisation. It appears to be showing some pull back, now only sitting around $30 million ahead of NEO.

Bitcoin continues to be range bound, with CoinDesk analyst Omar Godbole once again reiterating that it must pass $6,800 to escape range-bound trading and break upward.

It's been a frustrating few weeks for bitcoin speculators, as the currency has managed to hit that $6,800 mark, but failed to break further upward each time. Volatility continues to be at a 21 month low, as it looks like markets are holding their breath waiting to see what bitcoin will do. With a clear wedge pattern playing out, analysts predict the wedge will finish with a significant swing in either direction. So understandably traders are anxious to wait for confirmation on which direction it will be. BTC shorts on Bitfinex appear to be mirroring this anxiety. After a build up leading into October, they have fallen sharply which no doubt reflects a lack of confidence in the market. They now share the speculation market almost evenly with long positions, as Bitfinex now reflects 55% short positions, and 45% long.

The next major milestone for bitcoin will be the Securities and Exchange Commission (SEC) ETF decision. Considering that it has again been postponed for another couple of months, it's possible that the wedge will continue to hold in the meantime. It may be that markets will continue to be asleep at the wheel until news about ETF rekindles the market.

In short, both analysts and market participants seem to agree that bitcoin is overdue to make a move, but with little upcoming news to trigger a swing, it appears as though the current sideways trend may continue for some time.

A Manhattan apartment block appears to be the first of its kind to be tokenised and placed on the Ethereum blockchain. The apartment complex, worth $30 million was tokenised following a collaboration between digital asset firm Propellr and tokenisation specialists Fluidity. In total there are 12 condos, each backed by several tokens, with each token representing a share of the property's value. Depending on the divisibility of each token, this could allow people to invest in property with a much lower amount of capital than is normally required.

Michael Oved, co-founder of Fluidity which tokenised the asset, had this to say about its approach:

“Going to market with a landmark deal allows us to make a statement—that this technology is now real. With the right partners and an optimized structure, we are bringing a major real world asset online. We are grateful we have the opportunity to lead the blockchain community in this new paradigm.”

The two firms plan to continue the partnership and hope to tokenise more assets in the future.

The Gemini Exchange which is owned by the Winklevoss twins, has managed to go where not many other exchanges have gone before, and successfully insured its digital assets. Cryptocurrency stored in hot wallets, that belongs to both the exchange, and perhaps more importantly users, will be insured.

In their blog post announcing the achievement, Gemini's Head of Risk, Yusuf Hussain, wrote of the reasons why many insurance companies are hesitant to back cryptocurrency exchanges:

"To date, insurers have been hesitant to insure the crypto industry due to a large number of high-profile hacks that have resulted in catastrophic losses over the years, and the poor security standards, internal controls, and policies and procedures that have unfortunately characterized much of our industry."

Gemini has made it clear it wants to bring Wall Street-level security and assurances to the cryptocurrency market. Last month it announced that the former Chief Information Officer of the New York Stock Exchange Robert Cornish had joined the company, in what was another apparent move at flying the Wall Street flag. Cornish has already implemented the security technology from Nasdaq in his first month there.

Fiat – what is it good for?

Well this is certainly a spicy one – Christopher Giancarlo, the head of the CTFC, which is the US Commodity and Futures Trading Commission, has made some spectacular remarks about fiat currencies compared to cryptocurrencies.

Speaking with CNBC he said that "cryptocurrencies are here to stay, I think there's a future for them". But what is most interesting, is what he then had to say about fiat-currency:

“…There’s 140 countries in the world, every one of them has a currency; probably two-thirds of them aren’t worth the polymer or the paper they’re written on and those countries rely on hard currency. Bitcoin may solve some of the problems, whether it’s Bitcoin or another cryptocurrency, but we’re talking… ten years down the line.”

That is certainly a big statement from the head of an organisation that exists to protect consumers, by weeding out the bad seeds from financial markets. It certainly appears as though he, and perhaps by extension the CTFC, see the potential for cryptocurrency to become a very healthy crop, that can outgrow some fiat currencies.

Will the Petro replace fiat in Venezuela?

Giancarlo wasn't the only government leader praising cryptocurrency this week, as the President of Venezuela, Nicolas Maduro launched the nation's national cryptocurrency, the Petro.

You can see a little of how that went.

The Petro was originally promoted as being backed by oil, but a tweet by Maduro now extends the list to gold, iron, diamonds and aluminium as well as oil.

According to Al Jazeera, the Venezuelan government has announced it will pre-mine the currency, and has already allocated five billion barrels of oil to secure the asset.

While 2 October marked the official launch date, Venezuelans using Bolivars won't be able to purchase the currency themselves until 5 November. First will be a round of pre-sale, in which interested parties can purchase the Petro with both fiat and cryptocurrency. After that point, it will be available to locals.

A government spokesperson made it clear they want the new cryptocurrency to become as widely adopted as fiat, saying that eventually "Venezuelans can buy in the bakery with the Petro".

Asset-backed cryptocurrencies are nothing new, and appear to be rising in popularity. However this is the first time a cryptocurrency is backed by a state-owned asset. Given Venezuela's current economic crisis, there is certainly a lot of room for conjecture over the value of said asset.

It will also be deeply interesting to see whether a state-issued cryptocurrency will take off. The potential for it to work alongside fiat is something cryptocurrency enthusiasts have been desperate for, for years. Despite that desire though, payment networks and point-of-sale machines have been slow to see widespread adoption. It is unclear whether an economically stressed country will be able to roll out the required infrastructure to support everyday cryptocurrency transactions.

Venezuela is certainly not new to cryptocurrency. Earlier this week we brought you news that bitcoin purchases in Venezuela were at an all time high, as the country continues to suffer an economic crisis which has led to runaway inflation of the nations fiat-currency, the Bolivar.

Well fingers crossed, and all the best to the people of Venezuela and their economy. It would be wonderful to see a transformative technology like cryptocurrency and blockchain help alleviate years of hardship at last.