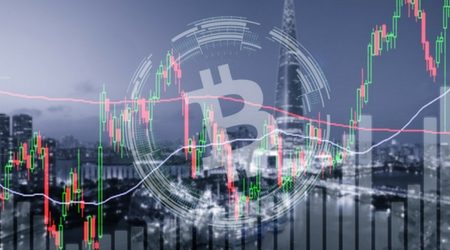 The leading cryptocurrency touched a high of just under $6,800 over the weekend and is currently sitting at $6,600. It has closed the month several hundred dollars lower than where it started, at around $7,000 on 1 September.

Despite the gradual loss in value over the course of the month, analysts are discussing the possibility that the bear run is out of steam.

CoinDesk analyst Omar Godbole says that bitcoin's inability to break downward of the 21-month Exponential Moving Average is a sign that the bear-selling is nearing an end. The EMA is currently around $6,150 and has formed strong support in the past 4-months of trade.

Despite this strong support level, bulls have failed to push the price upward in any meaningful way.

But all is not lost – over at Bloomberg they are reporting their analysis of RIG trend lines, which indicates an upwards breakout is due. Yesterday the Momentum Gauge crossed the Relative Strength Index, which has been a bullish signal in the past.

It is the fourth time this year that it's occurred. Each time it was followed by a steady rise in bitcoin's price for several weeks after. As recently as August, the RSI was crossed, and bitcoin's price rose by 21% over the following three weeks.

Moving on to today's big story... Huobi and EOS have come under fire this weekend, as documents revealed Huobi's successful attempts to buy and sell votes to become an EOS Block Producer.

The documents were posted by an EOS commentator on Twitter, named "Maple Leaf Capital", who claimed they had been doing the rounds in Chinese-speaking groups for some days now. As we can see here, one of the spreadsheets amongst the collection reportedly lists a series of hopeful Block Producers that Huobi is allegedly colluding with. It's said that Huobi are both buying and selling votes to these producers, to ensure each party is elected as a block producer.

Before we go on, let us explain what Block Producers on EOS are.

The EOS blockchain is validated by 21 Block Producers who vote between each other to reach consensus about the true state-of-affairs regarding the blockchain. Block Producers are elected by EOS coin holders in what is meant to be a democratic manner.

Successful Block Producers are often large consortium groups of users such as EOS New York and EOS Beijing, or may be corporate entities such as Huobi or Bitfinex, which are both cryptocurrency exchanges.

Becoming a Block Producer is a coveted role for several reasons, as it grants the highest level of voting rights on the network, a say in dispute resolution, as well as substantial financial rewards for producing each block.

Those who miss out on becoming one of the 21 Block Producers still have a chance. As 100 standby producers are also elected, who also get a share of funds from another pool of EOS coins.

Voting is done by staking coins. The more coins, the more votes you have. This means that exchanges, who manage massive amounts of cryptocurrency, are at an advantage with voting, as they can leverage user funds to give themselves more votes.

At this point you might be thinking it's obvious that an exchange is going to use this advantage to make themselves more money, and you'd apparently be right.

A rough translation of the leaked documents, indicates that Huobi are providing votes to 20 Block Producers, with 16 of them voting for Huobi in return. Those which are voted for by Huobi, pay-back Huobi with EOS tokens they earn from being a Block Producer.

Huobi allegedly earns over 1,000 EOS per day through this, in addition to what they earn as a one-of-21 Block Producer. As EOS coins are the key to more votes, there is reasonable concern that cartel behaviour such as this will threaten the integrity of the Block Producer system.

Which is why Block.one, who developed EOS, has taken steps to prevent this sort of behaviour. Article IV of the EOS constitution itself clearly states:

"# Article IV - No Vote Buying - No Member shall offer nor accept anything of value in exchange for a vote of any type, nor shall any Member unduly influence the vote of another."

Huobi has so far denied the allegations. Block.one has not yet commented on the involvement of Huobi directly but they did release a lacklustre blog post in response to the allegations.

The blogpost reminds readers of EOS's relative infancy and appears to shoulder the burden of responsibility back on to EOS holders and voters.

"We are aware of some unverified claims regarding irregular block producer voting, and the subsequent denials of those claims. We believe it is important to ensure a free and democratic election process within EOS and may, as we deem appropriate, vote with other holders to reinforce the integrity of this process. We continue working on our potential involvement with the goal of empowering the intent of the greater community through a transparent process that incorporates community feedback."

It remains to be seen whether users in a system, in which you can literally buy votes, will be able to oust an entity that reportedly deals in $1 billion worth of trades daily. According to CoinMarketCap data, yesterday Huobi accounted for roughly 15% of all EOS trade.

Tron was in the headlines over the weekend, and brought its latest acquisition BitTorrent along with it. Tron acquired the peer-to-peer file sharing (or torrenting) service back in July, and now plans to incentivise users of the platform by rewarding them with cryptocurrency.

The collaboration is titled Project Atlas, and appears to have two main goals in mind. To improve the speed of the BitTorrent protocol, and encourage users to be more active in uploading and seeding files on the network. The press release makes mention of a "custom-token" so it is not clear whether users will be incentivised with Tron's native TRX token or a new token.

One key takeaway is that the Project Atlas will be backwards compatible, and opt-in. Users of other torrent clients such as uTorrent will be able to part take in the network if they so desire. Being an opt-in system, users can choose whether or not they want to take part in Project Atlas or stick with classic BitTorrent as if bitcoin were never invented.

Before we go, we'd like to leave you with some inspiring words by Malta's Prime Minister. Speaking at the UN last week, he gave an impassioned speech about the power for change through blockchain technology. He even went so far as to call cryptocurrencies the inevitable future of money.