The market's small enough that one big week can skew all kinds of charts.

This exceeds its cumulative investment from 2013 to 2018 combined.

First, let's look at the cumulative yearly volume and coin breakdown in 2019 vs 2018. 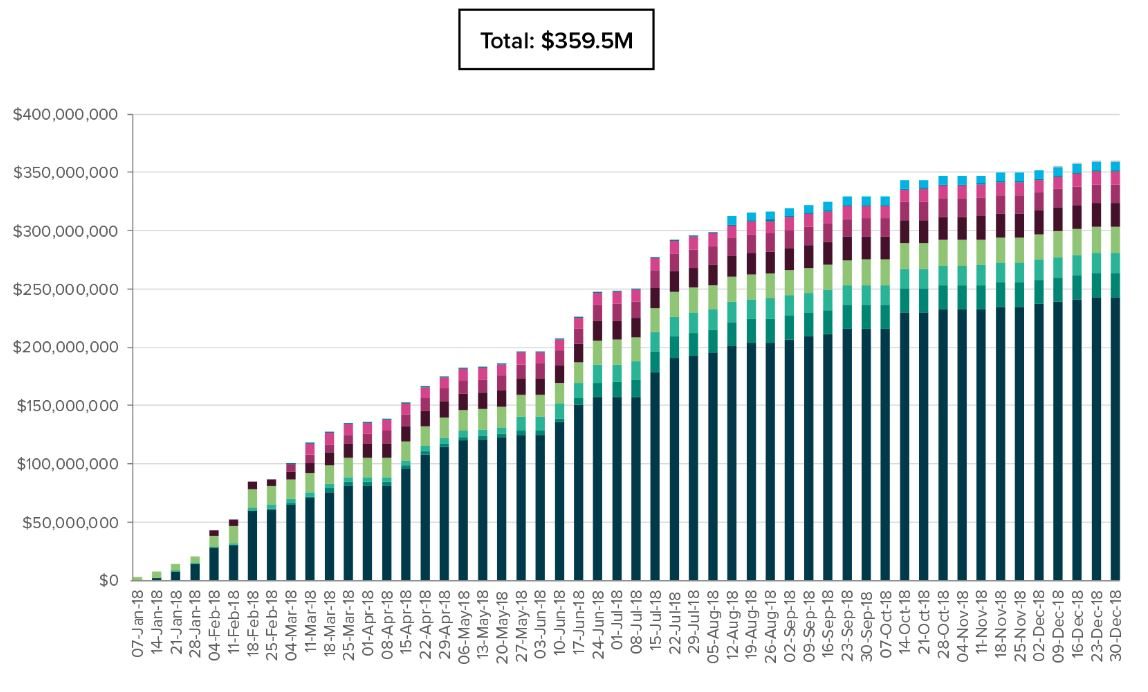 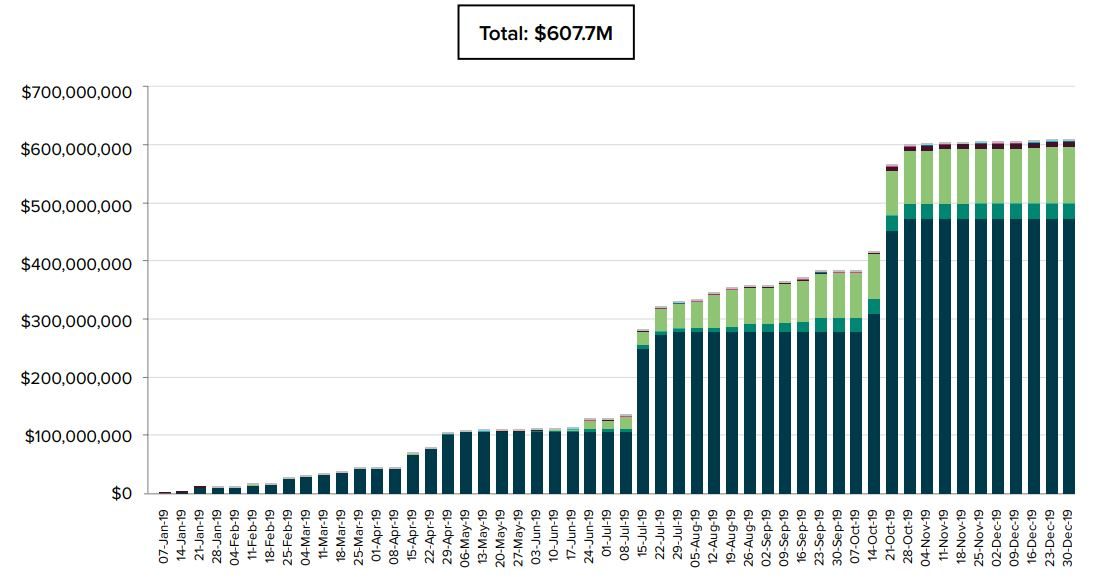 The total rise in volume from 2018 to 2019 is clear, but it wasn't equally distributed. 2019 actually got off to a considerably slower start than 2018, taking almost two months longer to hit the $100 million cumulative investment mark.

And when it did, volumes languished for several months afterwards. By contrast, spending in 2018 kept growing quite consistently. It was only in the third quarter of 2019 that volume exploded, with another major leap in the fourth quarter.

Tracking the timing along with Bitcoin prices, we can see that both of these major buying spurts in 2019 coincided with price movements, suggesting reactive buying rather than gradual accumulation. Bitcoin broke from $3,000 to over $5,000 in early April, foreshadowing rising Grayscale volumes a couple of weeks later once it seemed that Bitcoin prices had stabilised in that range.

But it's also possible that major purchases through Grayscale were moving the market in July and October.

That said, a single large XRP (for example) purchase can linger in the cumulative total charts for the rest of the year, giving the appearance of diversification where it probably shouldn't. When we look at the week-by-week breakdown of 2018 and 2019, it becomes clear that much of 2018's apparent diversity was just one or two large purchases.

Similarly, we can get a sense of how those two big weeks in 2019 accounted for the vast majority of Grayscale volumes last year. 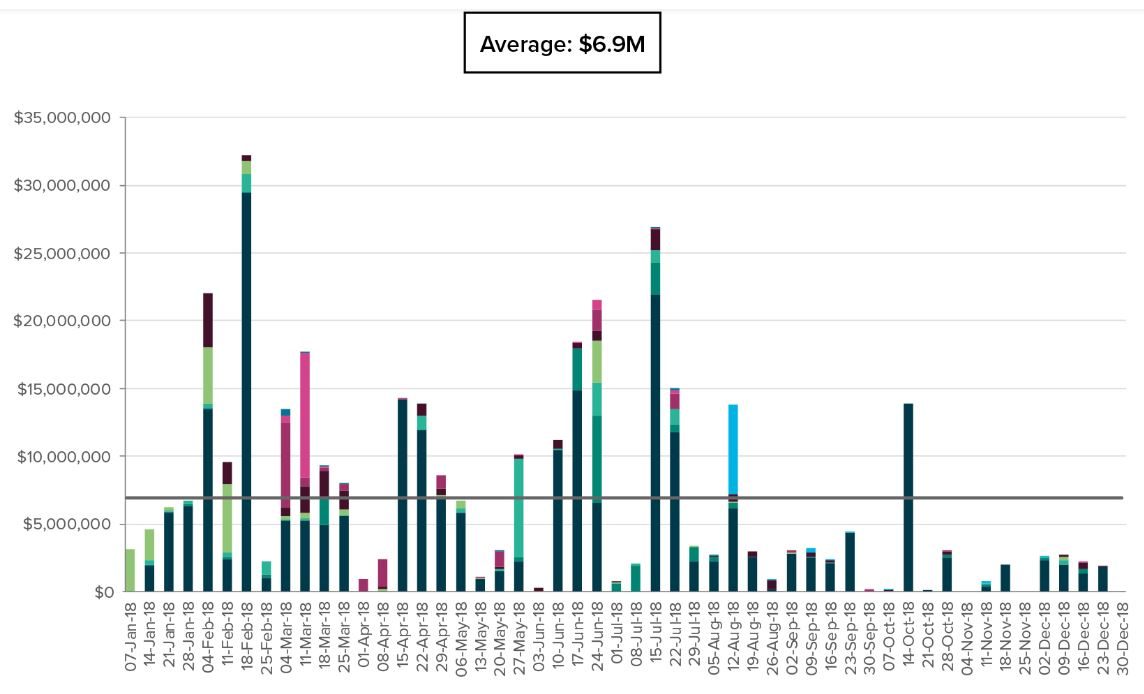 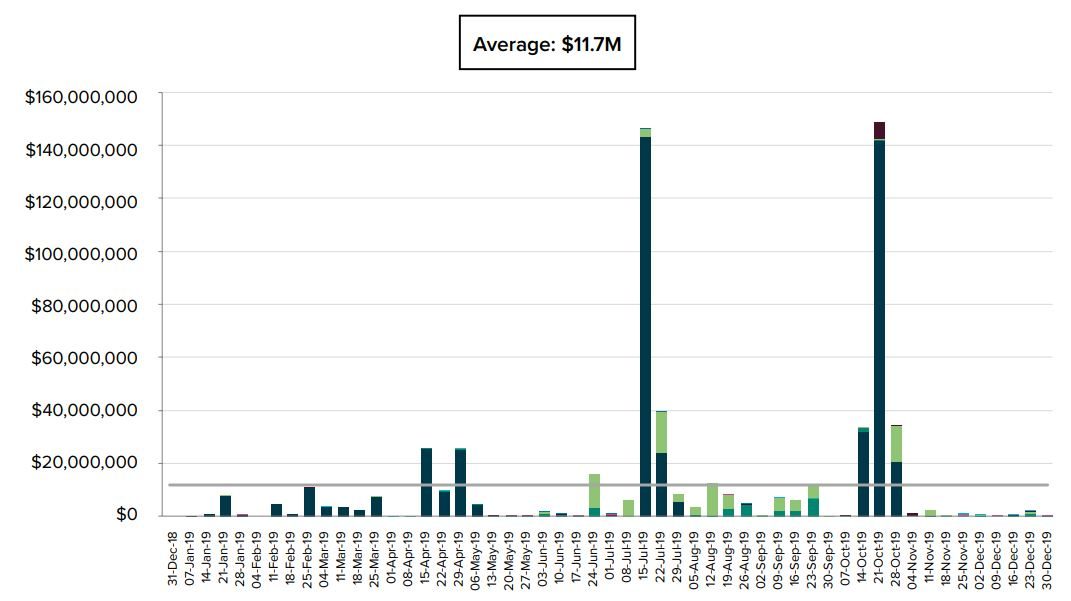 One of the more entertaining things to note here is that you can count all large Horizen (ZEN, the light blue bar) purchases in the last two years on one finger, when someone used Grayscale to plonk about $7 million into ZEN in the week of 12 August 2018.

Curiously, the Grayscale ZEN fund wasn't officially launched until 6 September. So almost all the ZEN ever purchased through Grayscale was apparently bought before the fund went public. ZEN would go on to be Grayscale's best performing coin in Q4 2019, seeing returns of about 140% while everything else was in the red. It doesn't look like too many Grayscale customers would have benefited from that though.

If there's one takeaway here, it could be that institutional investors don't appear to know any more about cryptocurrency price movements than anyone else. There's no consistent pattern of accumulation at low prices and little evidence of anyone timing the market. Instead, it's the same old story of volatility hitting the market and speculation following.