Cryptocurrency events are much more dominated by finance than tech

Disparities in the industries that feed into cryptocurrency are contributing to crypto's own imbalances.

A study of 100 cryptocurrency events across 15 countries, by events firm Bizzabo, has found the majority of attendees (60%) hailing from the world of finance, while tech only accounts for about a third. Management consulting rounded out the rest.

A further breakdown shows that a lot of the presence from the financial industry is accounted for by investment-oriented attendees. 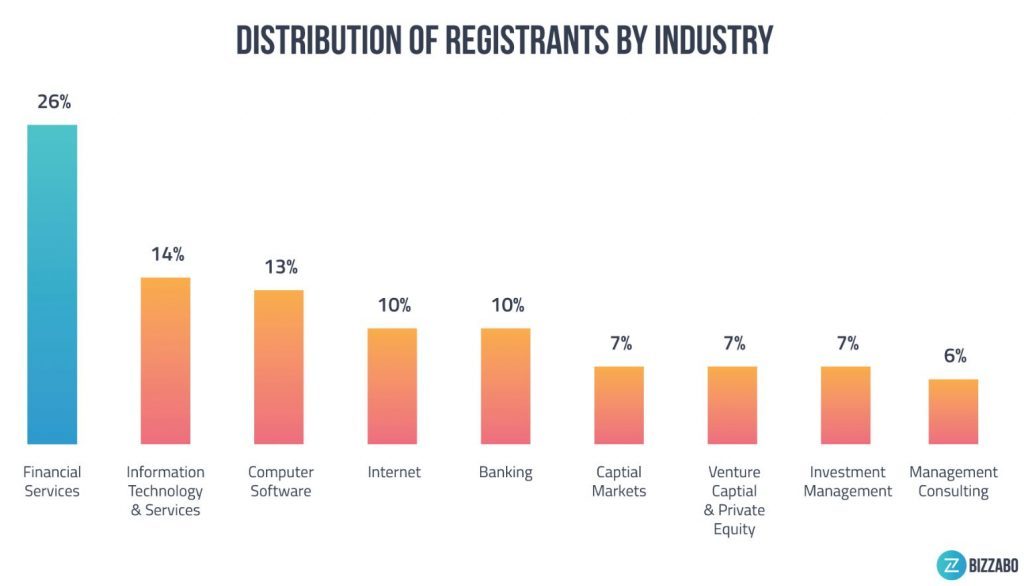 Captial (sic) markets, venture captial (sic) & private equity, and investment management accounted for over one in five of all attendees. This emphasises findings from elsewhere, that investors are still exceptionally keen on putting money towards the fledgling crypto industry despite slumping prices.

It might also be about what you'd expect for other reasons.

For example, different types of crypto events will attract very different crowds. A "digital asset investment summit" will naturally attract more financiers than a "conference on standardisation of blockchain programming languages and interoperability." There are probably more of the former than the latter.

You don't have to be a programmer or finance type to work in blockchain anymore. But by industry, crypto conferences are still far from diverse. This is in turn affecting other factors like gender diversity of attendees.

Conferences in general have a fairly abominable gender breakdown regardless of industry. On average, men outnumber women as speaker and panellists by more than two to one. And this isn't entirely because a handful of industries are skewing it heavily, although there is some of that too. Rather, it's because all industries tend to lean towards male presenters at conferences.

The closest to balanced was the higher education industry, where male presenters only outnumbered females 56% to 46%. The next closest was education management with a 59% to 41% male/female breakdown, then marketing advertising, and human resources, at 61% to 39%.

At the very other end of the scale, you have the industries which tend to feed into cryptocurrencies. Financial services (accounting for the largest group of crypto attendees) had a 73% to 27% male to female breakdown. Meanwhile, information technology had an 80% to 20% breakdown.

"Like the tech industry, at large, there is a lack of gender diversity in the overall virtual currencies space," said Bizzabo co-founder Alon Alroy. "The lack of gender diversity in attendees speaks to the industries most of the registrants come from," added Alroy. "The financial services and technology sectors have all struggled with inclusion and that has a cascading impact on the gender mix at these events."

Having said that, cryptocurrency performed especially abominably on the whole. Speakers tend to skew more towards men than women, but the latest Bizzabo survey was counting attendees, which one might expect to be a bit more balanced.

But it wasn't. On the contrary, it was even worse than the industries cryptocurrency conferences feed from.

The cryptocurrency industry is disproportionately gender skewed, even beyond what one would expect from a hybrid tech-finance industry. Within the industry itself, participants have generally shown identical attitudes to general crypto knowledge regardless of gender, with one key exception: even with identical experience, women tend to rate themselves as less knowledgeable in crypto than men.

This might in turn feed into the skewed gender ratio of speakers more generally. If you're looking for a conference speaker, you're looking for an expert, and by the numbers, men are much more likely to be self-described experts regardless of actual knowledge or experience levels.

In a fuzzier way, this can also tie into the overall gender disparity in cryptocurrency and into wider bodies of research around risk preferences in men and women.

As the theory goes, cryptocurrency was and still is a relatively little-known and high-risk industry. People who go down the crypto rabbit hole would naturally tend towards risk-happiness and a willingness to dive into something they don't really understand (along with a willingness to pretend they do), and men are more likely to have these personality traits.

Basically, because of the way it is, cryptocurrency draws a disproportionately male crowd from already gender-skewed industries, which explains why it tends to suffer gender disparity beyond almost any other industry.

Of course that's just a theory. It's also worth noting that just because gender ratios might be skewed "naturally" within an industry, that doesn't necessarily mean it's an optimal arrangement. It might be worth stepping back and asking how much of cryptocurrency's volatility, hype and YOLO investing is a result of its gender breakdown.

By the numbers, it's possible to reasonably conclude that the skewed gender ratio in cryptocurrency is having measurable market impacts.