Cryptocurrency crash: Here's why the markets are plummeting | finder.com.au

Cryptocurrency crash: Here’s why the markets are plummeting

Bitcoin's hit a new yearly low, and the bottom might not be in yet.

The cryptocurrency markets have taken a refreshing dive after spending weeks in the doldrums, splashing away about $25 billion in market cap over the course of just a few hours. Bitcoin in particular arced majestically below the surface of US$6,000, to a new yearly low in the $5,000 range.

After so little movement for so long, this drop is really standing out, and it might be worth asking why and probing for factors behind the drop.

There are a couple of obvious places to look.

Is it related to the BCH fork?

"Price volatility is not unusual in the crypto landscape – however, today's dip is significant enough to prompt industry players to stop and take stock of the reasons why. It's safe to say that Bitcoin Cash's upcoming hard fork was stirring uncertainty amongst crypto investors," says Donald Bullers, North American representative for Elastos. "Forecasters across crypto and traditional markets alike have predicted a prolonged bear market heading into 2019. Crypto investors have proven to be highly reactive to changes across the landscape, and this dip could be the most recent case study of that phenomenon."

It's possible that the upcoming Bitcoin Cash fork has prompted some uncertainty, but as eToro senior analyst Mati Greenspan points out, it's not an especially relevant coin and the attention it's given might be mostly for entertainment value in a flat market.

"Near as I can tell, the drama happening in BCH isn't a great concern. Let's face it, if prices weren't as flat as they've been in recent months, we probably wouldn't even be talking about this," he said.

Inside the BCH camp though, participants like Craig "Satoshi Dundee" Wright have attributed the crash to their infighting. The argument goes that big players like crypto mining giant Bitmain are going to enter into a prolonged hashrate war and so need to sell bitcoin to fill their war chests. Of course, those claims didn't come until after the prices had fallen, so it's probably just wishful thinkers trying to retcon themselves into the centre of the universe.

Whatever caused the prices to drop might have very little to do with the BCH sideshow of a sideshow.

Tether was also spilling over the sides of its peg in the days before the drop, which may have also jarred some nerves and made speculators twitchy.

But more immediately, the usual trend is for Tether to rise when bitcoin falls, and vice versa. This was on display today with clear signs of large early movers quickly tethering seemingly in anticipation of a drop at about 9am GMT, with enough urgency to rattle it from its peg, followed by the big crash a few hours later. 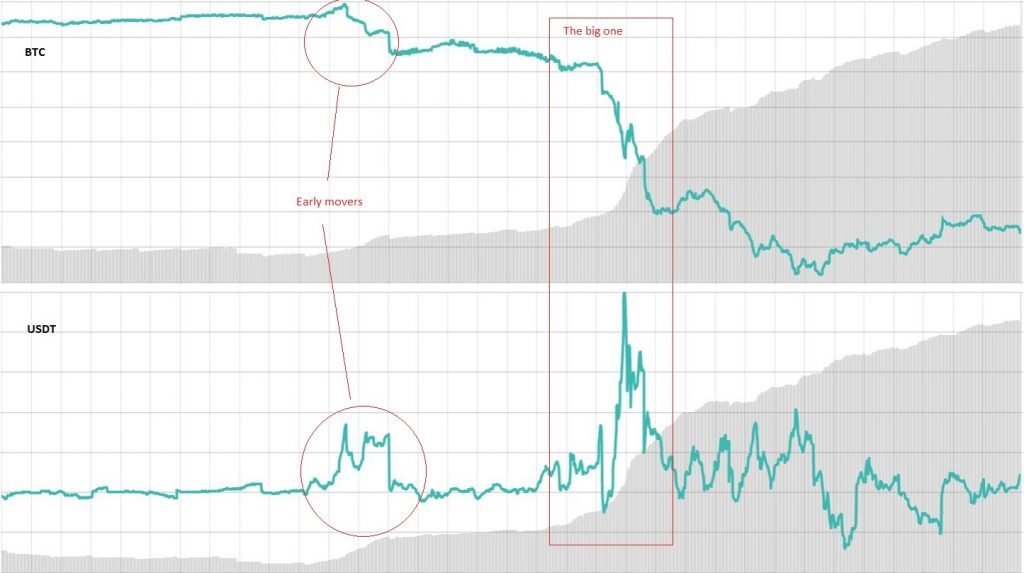 So, what happened at 9am GMT on 14 November?

This sudden downturn might just be market forces at work, rather than being tied to any specific event. It looks like there was just some pent-up pessimism on Binance that got uncorked suddenly, which then sparked a downhill domino run.

What does this downturn mean? Maybe nothing, except that a lot of people just made some money and a lot of other people lost some money.

"Crypto prices may rise and fall for reasons that are difficult to identify. However, the blockchain industry will remain strong and continue to grow," shrugs Monax Industries CEO Casey Kuhlman.

"Price volatility in the crypto market is nothing new," agrees INVAO CEO Frank Wagner. "These price changes can often seem drastic, especially to traditional investors, however, this impression of instability is largely caused by the fact that the crypto world operates at such a fast speed in comparison to traditional finance."

Others are even more welcoming of ongoing price downturns, seeing them as a way of eliminating distractions.

"The focus has moved away from checking the price of Ripple every 30 minutes and into building infrastructure," jokes Snark.art CEO Andrey Alekhin. "Fundamentally, the value of many, if not most, cryptocurrencies is entirely speculative," he adds.

Kalin Stoyanchev, project lead at RNDR, suggests that the markets might still be nursing a hangover after partying it up in late 2017.

"It rose too rapidly, too quickly in late 2017 + early 2018," he says. "Speculation drives innovation, and innovation drives adoption, so this is just a temporary cool-down in my opinion. This has also happened with crypto many times in the past (often worse), so I'm not too worried."

But even if it is just organic market forces shifting prices, there are still lessons to be learned from these movements.

The vulnerable state of the markets highlights the need for liquidity, notes Metal Pay founder Marshall Hayner. Despite movements to the contrary, cryptocurrency is still very much a relatively shallow pool of speculative assets. Actual adoption is needed to better immunise markets against these panics.

"To put it plainly, today's dip is likely indicative of the fact that the most recent round of crypto speculators are capitulating. Thanks to revised short-term expectations that call into question the idea of a bull run by the end of the year, many are likely taking their chips off the table," he suggests. "A key takeaway from this most recent decline is the continued need for crypto liquidity, which will likely be found in future stages of industry maturation, hopefully in the form of adoption by retail consumers in their day-to-day activities."

Market forces are not a substitute for monetary policy

A currency that's purely subject to panicky market forces might not be an ideal currency, says COSIMO Ventures CTO and ndau collective member Ken Lang. It could be a fantastic speculative asset, but useable currencies tend to have some kind of monetary policy to serve as a buffer against markets doing market stuff.

"One relevant factor in the price drop is that bitcoin doesn't have a monetary policy in place to mitigate downside volatility," he says. "That means that when demand contracts, there needs to be a process in place for contracting supply. Otherwise, market prices will fall, as we've seen today. As cryptocurrencies become more sophisticated and learn from the volatility and risks of older, more established coins, they should be designed with constraints in mind that help fight against sudden price dips like this one."

"Recent cryptocurrency trends reflect an amplified view of the broader macro volatility and uncertainty in crypto regulations," says Rohit Kulkarni, managing director of private investment research at SharesPost. "We believe that there are three likely catalysts that could result in a crypto market turnaround in the next six months: There is greater clarity from regulators which could embolden the market; A select group of blockchain startups that have completed token offerings in the past year finally announce innovative commercial products; As smart money and institutional capital keeps piling up, investors pull the trigger and call the bottom of the market."

So, is that bottom in yet? Who knows?