Crunch time is coming for cryptocurrencies and authorities 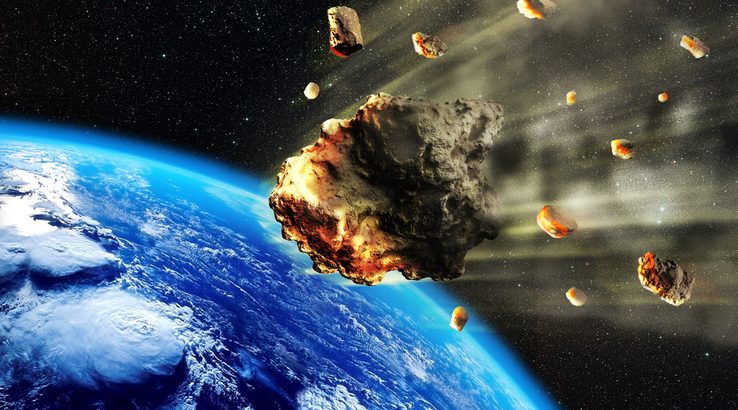 In the arms race between law enforcement and their quarry, and governments and other governments, cryptocurrency is starting to look like a doomsday weapon. Its rapid rise in popularity has seen it cropping up all over the place, and move from a niche area for specialists to a key part of any authority's job description.

Law enforcement is getting there quickly by necessity. UK police have been finding it for long enough now that Interpol started training its officers (or bobbies, if you will) on crypto and the darknet back in 2015, while Australia started taking much more of an interest in 2016 and the United Nations Office on Drugs and Crime launched a "train the trainers" cryptocurrency session in 2017.

New Zealand just got its third ever bitcoin bust with over $200,000 worth seized from drug runners, and India has been spurred into action by a seemingly endless series of bitcoin scams racing around the country.

The USA might have been one of the earlier adopters, with the 2014 closure of Silk Road and seizure of over 100,000BTC forcing their hand. The subsequent auctions might have inadvertently shaped the market today, by furnishing today's big crypto names like Pantera Capital and Circle with massively appreciating war chests.

Until recently cryptocurrency was considered a "marginal phenomenon restricted to the purview of experts," but today it's one more type of asset that needs to be handled by law enforcement and criminal justice workers of all levels.

Today's law enforcement authorities are increasingly well versed in bitcoin. Unfortunately, bitcoin isn't the peak of criminality, and it's exceptionally easy to track. Its widespread infrastructure and ease of use mean it's still the crook's coin of choice, but Monero, Dash and Zcash are all making rapid gains.

"We can see a quite obvious and distinct shift from bitcoin to cryptocurrencies that can provide a higher level of privacy." - Jarek Jacubchek, Europol cybercrime analyst.

Theoretically no, but functionally yes.

You might think of Monero, for example, as an invisible coin that leaves footprints in certain surfaces. For example:

The unusual nature of coins like these means it's almost impossible to gauge how widespread their use is. But clear signs suggest that criminals are going to dark coins in droves, that these moves are spurred by necessity and that given the choice they'd much rather use a privacy coin instead of bitcoin.

Recorded Future carried out a study of 150 dark web marketplaces and counted up which payment methods they supported.

The results might be about what you would expect, with a much stronger focus on privacy coins on English-speaking markets. This is probably because they're under a lot more scrutiny than their counterparts in Russia and Eastern Europe.

Meanwhile, bitcoin is still popular because it can be easily used by anyone, converted into any other cryptocurrency of choice or easily spent anywhere else on the dark web and put right back into circulation.

The same study also came across a very convenient poll on one dark web site that outright asked its users which coin they wanted more support for, with Monero and Dash being the winning choices by a decent margin. 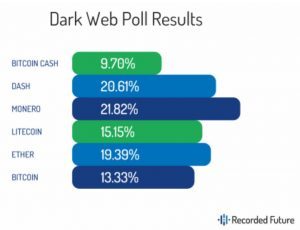 Based on the apparent demand for privacy coins in the darker corners of the Internet, they might become much more popular in 2018. This is where it really starts becoming a headache for law enforcement.

"It's far easier to spot when a relatively uncommon coin like Monero is bought in the first place," says Tom Robinson, co-founder and Chief Data Officer of blockchain intelligence company Elliptic.

"I believe that the biggest challenge for the privacy-focused cryptocurrencies will be to achieve and maintain sufficient scale and liquidity. At the moment simply using one of these currencies puts you at risk of being suspected of illicit activity, to a greater extent than for a user of bitcoin."

But as Monero becomes more accepted as a currency on the dark web, and more widely circulated, it will start disappearing from view. It can be spent on and put right back into circulation without necessarily leaving any footprints.

And even when things do go off the rails for criminals, it's going to be a lot harder to confiscate the coin or even know exactly how much money there is. Bitcoin addresses can be very easily linked to certain individuals, and every transaction leaves a permanent trace.

As thoroughly decentralised cryptocurrencies, it's not possible to crack down on the coins themselves either. If it felt so inclined, the Chinese government could theoretically destroy bitcoin, but Monero's network power comes from hundreds of thousands of different machines all around the world. And many of them don't even know they're mining Monero.

If there's a thriving marketplace for privacy coins, and enough goods to be purchased that it need never be converted into fiat currency, privacy cryptocurrencies might be a problem that law enforcement simply can't solve.

Your everyday dark web criminals aren't the only ones seeing unbreakable privacy as a solid benefit. North Korea has already been thoroughly enjoying the benefits of Monero, and half a dozen other countries that also face the threat of international sanctions are also eyeing the benefits of cryptocurrencies.

Between unbreakable anonymity, untraceability and being able to move money outside banking networks and without passing through any third parties, cryptocurrency might be an unbeatable weapon for anyone going up against the law.

As bad as that sounds, it shouldn't be too surprising. The global GDP is $75 trillion, and 2.5% of that is estimated to be dark money, says Kyckr CEO, David Cassidy. This dark money is either paid by people to each other in drug deals and other everyday low level crime, or used to fund terrorists and rogue states, buy drugs, slaves, illegal weapons and do other things you probably shouldn't list on your taxes.

Of that $187.5 billion dark money market, it's thought that only 10% is P2P consumer dark money. The remainder is institutional dark money, professionally and nefariously passed along in vast amounts, with the help of the global web of corruption and well developed criminal networks.

Criminals have always been a step ahead of the law because those aren't getting arrested. The rise of completely anonymous, untraceable no-bank-needed currency might have set authorities and cryptocurrencies on a collision course, but what it actually means, or whether we'll even notice it, remains to be seen.

Criminality has always been a big industry and despite the nefariousness of it all, there might be relatively few perceptible impacts to this fairly dramatic shift.