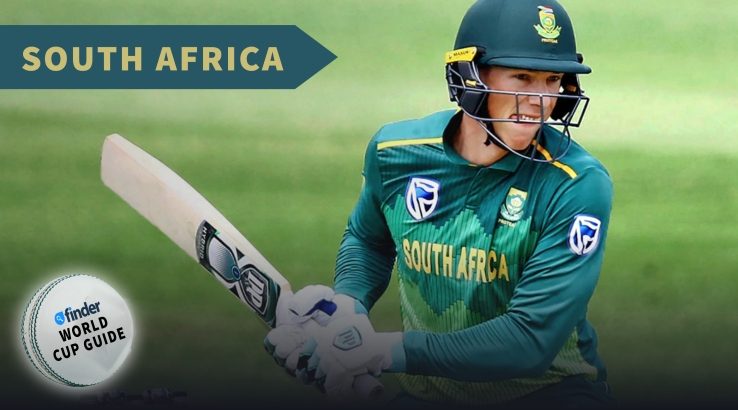 Can South Africa shed the "chokers" tag and finally win the ICC Cricket World Cup? Let's take a look at the squad's stats.

South Africa are the third-ranked team across the three formats of Test, ODI and T20 cricket. The Proteas are always one of the favourites going into the Cricket World Cup, but have been unable to get past the semi-finals on four occasions: in 1992, 1999, 2007 and 2015. More than once they've had themselves to blame, perhaps most famously in 1999 against Australia – the last time the Cricket World Cup was held in England. The implosion that led to the run-out with the scores tied in that match has haunted South African teams ever since and this side will be keen to avoid a repeat.

South Africa are a team with a lot of talent and experience, as well as a balance that suggests they have all the boxes ticked. The majestic Hashim Amla might be coming towards the end of his career, but he's still a prize wicket for any bowler. Alongside Quinton de Kock's ingenuity with the bat and mercurial captain Faf du Plessis, the South African batting line-up oozes class.

A bowling attack led by Kagiso Rabada, Dale Steyn and Lungi Ngidi is one to be feared, too, but there's plenty of depth as well to support those three speedsters.

South Africa should be good enough to reach the semi-finals, but after that it comes down to whether this group of players has enough mental fortitude to go further than South African teams of the past. If they do, South Africa might finally be able to shed the "chokers" tag that's been unfairly bestowed on them.

If you want to watch South Africa win (or choke) in the Cricket World Cup you have two options: Foxtel and Kayo Sports. Both services show all 48 World Cup matches live and on demand. We've put together a detailed comparison of these options alongside a stack of additional information in our where to watch the Cricket World Cup guide.

There's a stack of experience in the South African Cricket World Cup team, but the next generation of players hasn't had much luck. Indeed, four-game rookie Anrich Nortje was ruled out of the squad before the tournament began. Here is South Africa's 15-man squad for the ICC World Cup 2019. This can be changed up until 30 May in case of injuries, so we'll update this list as required.

Here are all of the scheduled matches for South Africa in the ICC Cricket World Cup 2019. This includes a guide on where to watch a live stream of South Africa's matches.

31.5.19 – South Africa captain, Faf du Plessis has said England were "better than us in all three facets of the game". His comments came after his side's comprehensive loss to the hosts in the opening game of the tournament. The skipper also said a batting collapse ended any hopes of victory, "when you go three down chasing a big score like that, you're making it really tough for our batting unit to perform."

Steyn ruled out of tournament opener

29.5.19 – South Africa's pace spearhead, Dale Steyn, has been ruled out of the tournament opener against England through injury. It's not certain when he'll be fit to play but with nine group matches and depth in the fast bowling department, South Africa can afford not to rush Steyn back too early. Coach Ottis Gibson seemed relaxed about the situation saying Steyn was "not far away, but not ready yet" and was confident he'll be ready later on, adding "with a six-week tournament there's no real need to force the issue".