This remaster bears fruit and Coco pops in 4K.

This culturally important remastering could have spun out one of two ways. A: Activision decides to do right by mascot royalty by putting the required time and effort into Crash’s resurrection. Or, B: they lazily wheelchair out a geriatric old ‘coot, neglected and covered in poopy textures. After being been burned by Activision “remasters” before (case in point: the decidedly half-arsed Marvel Ultimate Alliance games) we figured the latter would happen.   Imagine our childish delight when the answer came back A. Vicarious Visions’ “remaster plus” of the first three Crash Bandicoot games (originally developed by Naughty Dog) has been wrapped up into one delightful package. 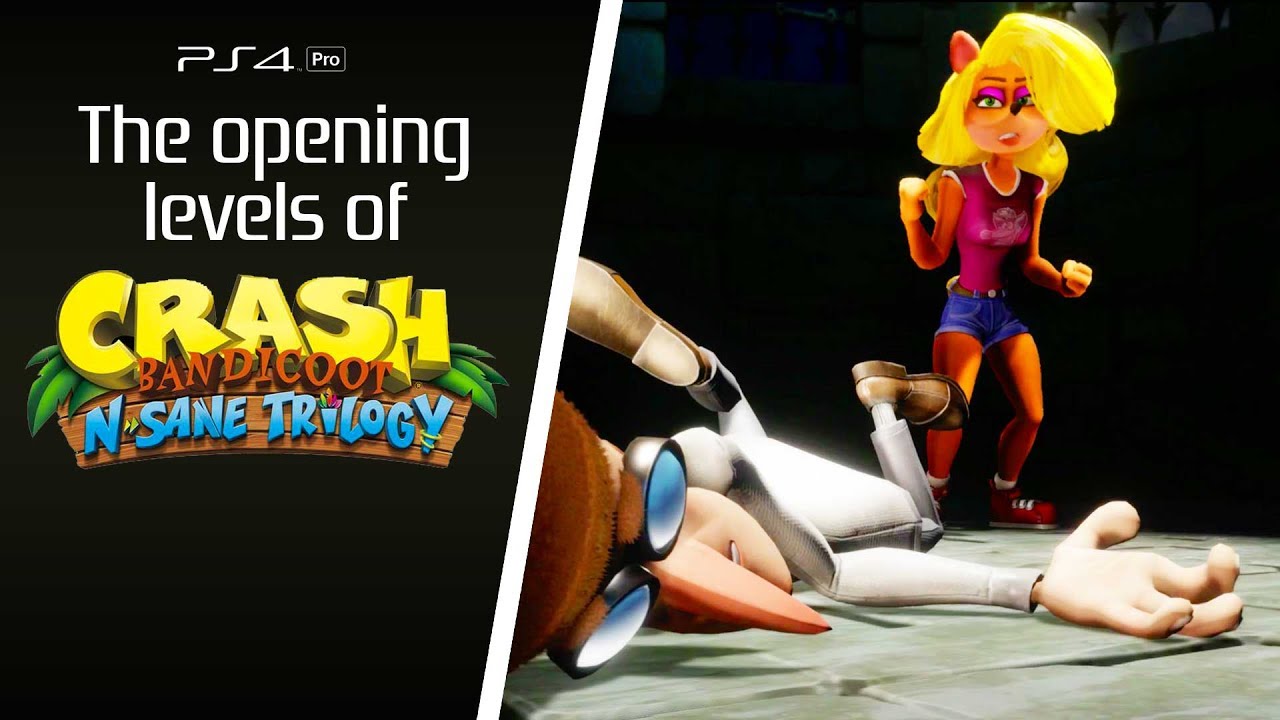 Forget all your fears. The 3D platforming games of original PlayStation legend have never looked nor played better.  The visual upgrade you’re getting here is about as ridiculous as Naughty Dog’s understanding of Australia. Instead of a low-res texture smeared over polygons sharp enough to have your eye out, the bandicoot and his weirdo version of Oz are in all ways sumptuous. Crash’s fur glistens in the rain (which was once thin, jagged white lines, now beautiful droplets streaking down the screen). The most primitive visuals of the package, the tribal ruins you endless ran through in the first game, are now popping with amazing detail. Fully-formed vegetation pokes through these monoliths, swaying softly in the sea breeze and lit by gorgeous multi-source lighting. A lazy-arsed upscale to 1080p / 60fps this most certainly is not.

Expect your ears to be in remix heaven, too. This new collection features a fully-remastered game soundtrack, packed with all the didgeridoos, xylophones, thumpin’ bass lines and all those random Swahili call-and-response sound bytes of yesteryear. Likewise, returning voice actors Lex Land (Dr. Cortex from Twinsanity onwards) and Jess Harnell (Crash from CTR) put in solid performances which stick to the original source material. 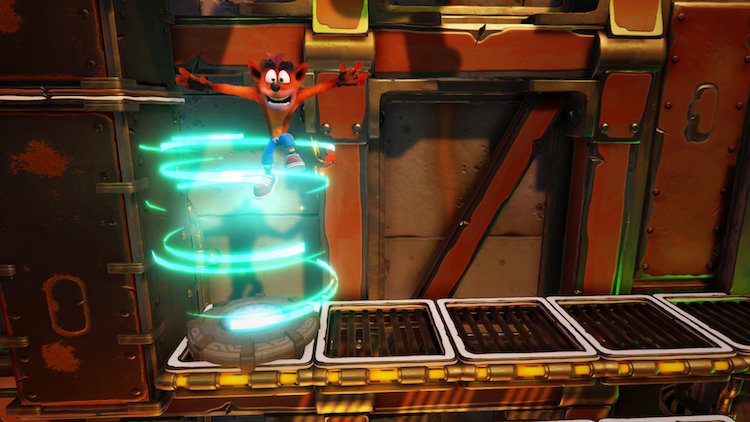 Though Crash might look like a kid-friendly caper, it has a core tougher than the “all clear” diamonds you're chasing. Judging the depth of your jumps correctly in this kind of game can be hit and miss for a while, and the controls are classic Crash – sensitive, finicky. Vicarious, however, has done a remarkable job of preserving the marsupial’s weighty yet gymnastic movement. Controls require precision, but not so much as to hamper the fun of mid-air splits and slides.   Obviously the third outing, Warped, is the pick of the litter here. The basic jumpy-jump and crate kleptomania of the first game is all well and good, but it can’t compare with the set-pieces of the third, or just the feeling of whipping out a Fruit Bazooka on L2 and felling the brutes by squeezing R2 (a subtle, but more natural-feeling, improvement from the original Circle button). Crash’s basic moveset feels razor sharp and sure, too. Expertly bouncing off stuff to slingshot up into otherwise unobtainable goodies; sucking up wumpa fruit; nailing gaps; and face-slamming fools below. The old muscle memory momentum kicks in and instantly transports you back to the Nineties. We fully expect parachute pants and pog sales to spike after this game releases.

Vicarious hasn’t dumbed down the difficulty one iota, but the team has modernised with some greatly appreciated creature comforts. New Crash fans can experience playing the trilogy with full analog stick support, though we personally prefer to bruise our thumbs on the d-pad. You also no longer have to wait for Tawna Bandicoot's blessing before getting a chance to preserve your progress. No mini-games to run through, no token collection, just a new unified save and checkpoint system available from the map screen.   Speaking of femme furtails: a bit of time machine logic has allowed Crash’s sister, Coco, to be a playable character across all three titles. We found tackling the first game with her unique skillset to be especially novel. She’s also the more talkative version of herself (she was oddly mute in the original Warped). Props to Vicarious for not only adding some diversity, but also giving veterans a very good reason to replay.   Existing, eagle-eyed fans will also enjoy the improved bonus levels and time trial opportunities retrofitted into the game. There’s extra challenge to chase and an opportunity to rub noses in, thanks to the obligatory integration of worldwide leaderboards. We remembered ourselves to be lighting fast and economical with our runs, but man, there are some freaks out and about already. 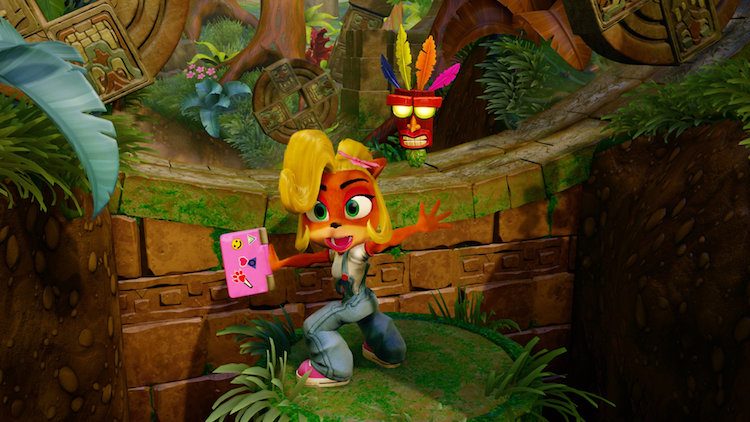 Ultimately, what you’re getting the same old Crash. Three quality Naughty Dog games which can be attempted in any order you please, and can be 100-percented in roughly 4 hours apiece by a skilled gamer.

There are no massive goal post shifts to the original source material, merely small quality-of-life improvements.

These remastered games feel perfectly at home in 2017 – and it’s so good to see the old bugger back in the polar bear and/or warthog saddle again. Fingers crossed the success of this package will spin us all into a brand new era of fresh Crash Bandicoot capers.

I held off on picking up the PS4 version of the Crash Bandicoot N.Sane Trilogy, partly because I'm such a stubborn old retro fool, and partly because those persistent rumours that a Switch version was in the making had me intrigued. Crash's early adventures are well suited to a mobile format, because the levels, while tough, are quite bite-sized.

Activision really hasn't done much to Crash on Switch that isn't present on the PS4 versions (or presumably the Xbox One version, not that I've played that), so Adam's original observations on the quality of the gameplay still hold true. Still, there are a couple of important differences that Switch owners should bear in mind before laying down their dollars for Crash's adventures, especially if you've also got a PS4 or an Xbox One.

Obviously, you don't get Crash in glorious 4K on the Switch, because that's just not going to happen given the power of its hardware. Unless you plan some kind of bizarro compare-side-by-side-while-you-play streaming experiment, this actually doesn't matter that much at all. The remastered visuals are fine in 1080P on a primary display, and even crunched down to 720P when playing on the Switch in handheld mode they look great. Certainly, firing up the original on an actual PlayStation and comparing makes them look stellar, even if they're not quite as spiffy.

Then there's the question of control. It feels odd, almost sacrilegious to be playing Crash's early adventures with something that isn't a PlayStation controller, but I soon got over that. On the Switch you can control Crash with the analog stick, or if you're weird, with the Joy-Con buttons beneath. While these were originally digital, not analog games, this doesn't work all that well, so analog is the way to go.

On the Switch, Crash makes full use of the Switch's vibration features, but this isn't as welcome as you might think. Crash vibrates a lot, especially when you die, which you will, because these are still tough games to beat. I was left wondering if there was a way to dial back the vibration, or even switch it off, but that's not in the current code. With the mania for software updates, maybe I'll get lucky and that'll be in a future update.

Those minor niggles aside, Crash N.Sane Trilogy is an essential update of a classic gaming series that any Switch owner who likes decent challenges and platform games should pick up without delay.

They’ve polished this wumpa fruit up better than we thought was possible. Crash is still challenging and essential. Take him for a spin