With strange circumstances at Bitfinex, all of crypto is under the spotlight.

One of the most gobsmacking elements of the latest Bitfinex and Tether revelation is that Bitfinex let its payment provider hold over US$850 million without any kind of contract or paperwork.

When they heard this, a lot of people started thinking the same thing. Some of them even put it in writing. 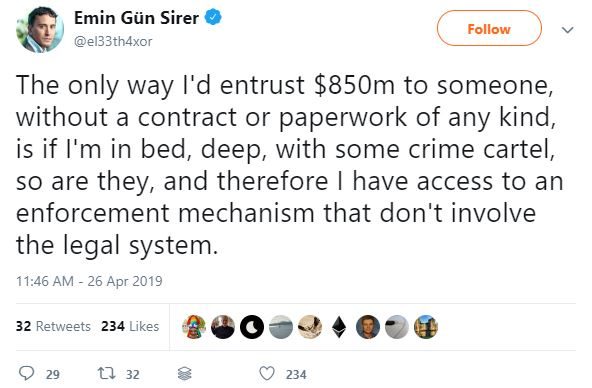 But Craig Wright, the Australian self-proclaimed inventor of Bitcoin, was speaking his mind out loud before the news broke. In a far-ranging interview with Finder, Wright said many cryptocurrency exchanges are deeply rooted in criminal activities, and he described Tether as "a criminal money laundering system."

"We've got a whole lot of con men out there who want to keep the industry being con-man industry," he said.

And variety is the spice of life on these exchanges, he noted, because it lets criminals cover their tracks, similar to how moving funds through different businesses and places is used to launder fiat currency.

"They [the exchanges] want [to list] thousands of coins because if you can get coin to coin to coin to coin, and then some of them just disappear, you get this whole money laundering industry," he said. "That's what it is. That's why the FBI guys want to get rid of Monero – because there is a drug trade."

Market manipulation and money laundering are sidelines to each other, Wright said.

"They do a whole lot of pumps and illegal dumping, and all the rest... So they do basically the pre-announcement stuff... pump up the price, get people to put their savings and investment into [it], and they will short the crap out of it. And they can make sort of a hundred times the money they've stolen – because they're thieves. They steal all this money."

It's worth noting that while Wright made his assertions before Bitfinex and Tether went under the spotlight, he made them after his Bitcoin SV cryptocurrency was de-listed from several exchanges.

But according to him, the de-listing was part of a wider smear campaign from exchanges that see Wright as a threat and that want to protect their business interests.

"This is why they don’t want me talking. They want to shut me up because this is a criminal organisation," he emphasised.

Tether is a popular medium of exchange in the dirty money cycle, Wright suggests.

"What these guys do is they take money from around the world and they pump it through their system and back out through Tether, which is also a criminal money laundering system, so that it gets lost in the banking industry," Wright said. "So that people in Russian groups, in Cyprus, in Africa, in a whole lot of these areas where they can buy guns, they can buy weapons, they can sell people, and they can do it because they’ve got a whole wash trade here outside of Bitcoin without any audit trail."

To further obscure its origins, the funds will flow in and out of different exchanges of varying legitimacy, Wright said.

The money cycle he describes is one where dirty money is sent to low-KYC exchanges, and from there is traded around and swapped to help obscure its origins, moving in and out of different privacy coins and migrating to more exchanges as seemingly clean money.

You can "flush" dirty money through a low-KYC exchange, Wright says to "totally cover up the fact that [it's] been coming from all these illegal trades."

A cottage industry of sorts has sprung up around exchanges, he claims, to better laundering the money.

"Get a few people who pull the tags off and do the whole Bitcoin mule industry – Zcoin and Monero and whatever else – and that's the modern mules. And you have these people that are paid hundreds of dollars per day to pass and wash money.

Opinion: What forest? There's just a bunch of trees here

Is the cryptocurrency world as much of a den of iniquity as its reputation, and Wright's assertions, would suggest? Is Tether being used to shuttle large amounts of dirty money between exchanges?

It's hard to say. The strange lack of documentation between Bitfinex and Crypto Capital seems like a clear warning, but at the end of the day, none of the alleged filth here, if you want to call it that and if there is any, is unique to crypto.

Crypto Capital is a registered financial institution, and according to Decrypt, it arranges fiat banking for its crypto customers through shell-like companies and serves customers outside the crypto world too.

And if Tether is an illicit money laundering system, then what are gift cards or prepaid debit cards? Both are largely anonymous and easily transferable tokens backed up by real value held elsewhere. And that's why money launderers love them.

For some perspective, an estimated US$24 billion in dirty money was moved across the US-Mexico border on prepaid debit cards and gift cards in 2011, and it remains a problem in part because Visa and other card companies successfully lobbied against efforts to crack down on this.

While they have applications beyond crime, it is literally correct to say that gift cards are a criminal money laundering system.

The uncomfortable truth is that the world is simply losing the fight against dirty money – and losing badly. And this problem won't be solved by playing whack-a-mole with crypto exchanges or coins, especially because cryptocurrency is estimated to account for only about 3% of illicit money movements around the world.

A smarter thing to do is explore how the best exchanges are combating money laundering, and then learn from them. Blockchain has a lot of potential for improving current anti-money laundering (AML) systems, and exchanges are on the frontline of applying these techniques.

There's no sense in disregarding an entire lesson just because it includes some examples of what not to do.