Banks generally work with compound interest - it pays to know how it works so you can make the most out of your investments.

By compounding the interest, it is meant that an interest-yielding investment earns interest on the interest earned for a particular period. Compound interest is computed using the following formula; 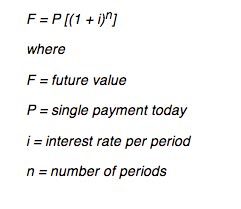 The concept can be explained in contrast to simple interest. In simple interest, an interest rate of 5% that is earned by a $1000 investment for a year for example, would yield $50. This is obtained by simply multiplying the interest rate by the principal amount invested and the interest is earned only paid at the end of a specific term. Since interest is not added up to the principal, there is no compounding. This not commonly used unlike compound interest.

Compound interest is different from simple interest. In compound interest, interest is earned on a previously paid interest. That process of adding interest to the principal is called compounding. To illustrate, you invested $1000 with an interest rate of 10% compounded for 5 years. The initial investment of $1000 will earn $100 on the first year, giving you a total of $1100. The total amount yielded for the first year will then earn $110 as interest for the same year, making your money $1210. This amount will then be the base for compounding for the third year, and so on.

To simplify, compound interest is computed using the formula above, where F refers to the final compound amount to which P, the original principal invested or owed accumulates by the end of the period. Interest rate is expressed by the symbol i and n represents the number of years for which the investment will earn compound interest.

Using the same example given, P is $1000, i is 10% and n is 5. Substituting the figures to the formula given will give you the total amount.

With compound interest, the principal amount invested has earned more than 50% in interest. The more frequently interest is compounded, the more advantageous it is for your part as the higher the yield will be on the amount invested.

For accounts with interest to be effective, it must specify the frequency of compounding which can be monthly, quarterly, or annually depending on the financial institution including the interest rate. The effective interest rate, which is also referred to as the annual percentage rate (APR) or effective yield has to be explicit as a requirement for transparency and consumer rights before a specific investment contract or loan agreement is concluded.

As the true rate of interest earned, the effective interest rate is best illustrated whereby $1000 is invested compounded yearly for a rate of 10% resulting to $1100. Compounding the investment monthly will yield a total of $1104.70 at the end of the year and having an effective annual interest rate of 10.47%, which is then the effective rate that accounts for the effects of compounding.

If you don't have a pen and paper handy, use our handy calculator to work out the compound interest on a given amount.

*Whilst every effort has been made to ensure the accuracy of this calculator, the results should only be used as an indication. They are neither a recommendation nor an eligibility test for any product and should not be construed as financial advice, investment advice or any other sort of advice.
Was this content helpful to you?
Thank you for your feedback!

Sally McMullen is a creative content producer at Finder. Sally has written about credit cards for almost 5 years, authoring almost 900 articles on Finder alone. She has also been published in Yahoo Finance, Dynamic Business, Financy and Mamamia, as well as Music Feeds and Rolling Stone. Sally has a Bachelor of Communication and Media Studies majoring in Journalism (Hons) from the University of Wollongong.