Comparison of the week: Cats vs dogs 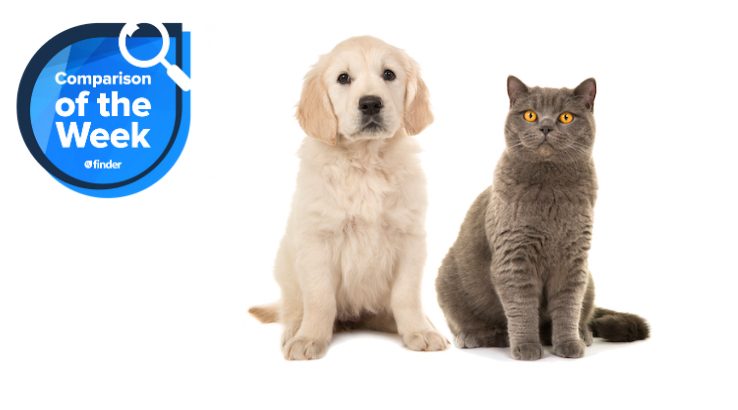 The truth about cats and dogs. Which is the better pet for you?

We compare virtually everything at Finder and our Comparison of the week isn't afraid to tackle the big questions. This week we put cats and dogs to the test.

In Australia it's no secret we love our pets. When it comes to furry friends, cats and dogs top the list. According to moneysmart.gov.au, 3 in 5 Australian households now have a pet and cats and dogs make up 67% of those pets.

Now fans of each species are as notoriously combative as the actual species themselves and there are plenty of crazy cat people who diss on crazy dog owners and vice versa over the superiority of their chosen pet.

But whether you're team cat or team dog, or one of those highly evolved people who like both, we break down the hard facts on cats versus dogs.

While cats and dogs have been stalwart companions and co-workers of Australians for centuries, recently there has been a real shift in how we see their presence in our lives. Australians have a strong emotional attachment to their pets, with people increasingly considering them members of the family rather than companions. As a result most pet owners want to provide their pets with the best possible life and are now spending more across an increasing range of pet services and products.

The Animal Medicines Australia (AMA) 2016 report on pet ownership shows the rise and rise of the "fur baby" with the number of dog and cat owners who consider their animal part of their family jumping to 65% in 2016 from 57–59% 3 years earlier.

As a result these extra family members of ours are costing big bucks. According to the BankWest Family Pooch Index, the cost of owning a dog over its lifetime can be up to $25,000 and according to moneysmart.gov.au cats cost slightly less but also live longer than dogs, so they set owners back around the same amount.

If you're thinking of bringing a canine or feline into your family you should do the maths. The cost will vary according to breed, age, size, whether they have health issues and if you choose to take out pet insurance. You also need to decide which of these very, VERY different creatures might suit you and your lifestyle best.

There are a few key differences between cats and dogs.

I could go on and trust me, some of the more rabid members of team cat or team dog will want to do that. But when it boils down to it, it seems like cats are for relaxing and dogs are for having fun. And really rather than have a war about which is better, in the words of the little girl in the Old El Paso ad, "por qué no los dos?".