Coinbase Custody is considering XRP among 36 other cryptocurrencies

What does Coinbase Custody support mean? It might be nothing much, but it's definitely not nothing.

Coinbase Custody is exploring support for 37 new digital assets. The most prominent of those, in both market cap and contextual significance, is XRP.

XRP is the number three cryptocurrency by market capitalisation with, with numbers one and two (bitcoin and Ethereum) already being fully supported by Coinbase. And contextually, Coinbase and XRP have been standing opposite each other for a while.

Back in late December and early January there were widespread rumours of Coinbase listing XRP, with supposed insiders showing supposed evidence that Coinbase was testing XRP, and would be listing it in the very near future. This was in cryptocurrency's lowest-gravity days, when a slight touch was all it took to make prices jump.

However, a listing on Coinbase was anything but a light touch. The previous Bitcoin Cash listing of just a couple weeks earlier saw BCH prices multiply, and XRP holders were understandably enthusiastic for their turn. 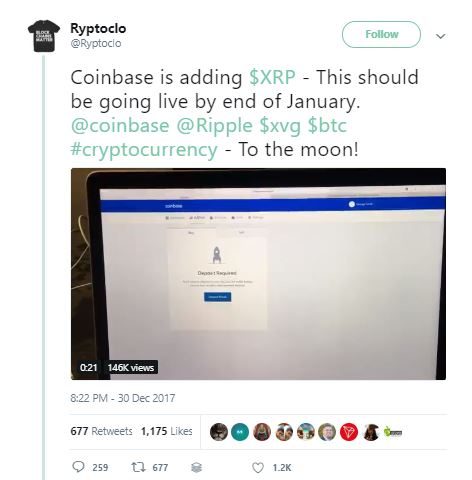 But the XRP listing never happened, and the next six months would see people's hopes repeatedly rise and fall with rumours and speculation in both directions.

Now Coinbase Custody has announced that it's considering XRP among 36 other digital assets, making it the closest thing to an official XRP listing announcement yet. It's big news in the context of the stand-offish history between XRP and Coinbase, but enthusiasm is also tempered for several reasons and nothing's confirmed yet.

The good news and the bad news

The good new is that Coinbase has acknowledged XRP's existence. The bad news might be everything else, and any impacts this announcement has on XRP prices may somewhere between muted and nonexistent.

It might also mean XRP is more likely to someday end up on Coinbase itself. One theory holds that Coinbase will never list XRP, for risk of unintentionally supporting Ripple as a competing business, so this news suggests that XRP isn't complete anathema, as some might have feared. At the same time, the announcement explicitly says "Coinbase Custody will likely support more assets than those available to trade through other Coinbase products". Functionally, this probably shouldn't be taken as any indication that XRP will ever end up being bought and sold on Coinbase.

The other piece of bad news for XRP enthusiasts is that it's just one cryptocurrency coin among dozens, including ERC20s, and nothing's definite yet. As the announcement says, "We cannot commit to when or whether these assets will become available on Coinbase Custody."

The full list of digital assets being explored by Coinbase Custody is: