You can still do Coachella 2017 from just $1,715 including flights from Australia 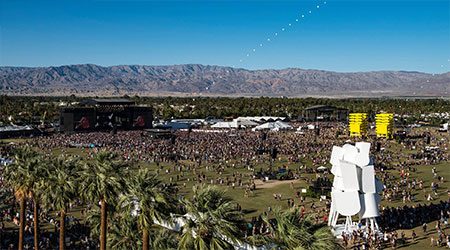 Tickets have officially sold out, but you can still get to one of America's biggest music festivals.

General admission tickets to Coachella Valley Music and Arts Festival went on sale on 4 January, only to sell out within an hour.

At US$399 a pop (approximately AUD$543), the tickets included access to headliners Radiohead, Beyoncé and Kendrick Lamar along with performances by Lorde, Emire of the Sun, Bon Iver and dozens more.

While general admission tickets only included access to the festival, there were official packages on sale starting at US$2,229 (AUD$3035) for two people, or $1517.50 each, including accommodation and tickets.

We've found a way to create your own package to the festival, including general admission tickets, three nights' accommodation near the festival, return flights from Australia and a bus transfer from Los Angeles to the festival in Indio, California from $1715.50 per person.

Here's how we did it.

We checked a range of sites to see who was already re-selling passes and found tickets for less-than-cost on Craigslist. You can learn more about alternative Coachella ticketing options in our guide.

Coachella's official accommodation options all included three nights' stay at the festival. Camping spots, which sell for US$113 each (AUD$153) for the weekend, along with the swankier glamping options, which start at US$2,398 for two (AUD$3,265) including festival tickets, are sold out. There were also hotel accommodation packages, which started at US$2,229 for two people (AUD$3,035) including festival tickets and a shuttle, are also sold out.

There are still external accommodation options available in the area, including hotels and homestays. We found stays in the Palm Springs area from as low as $289.50 per person for three nights over the weekend.

We used fare comparison site Hipmunk to find the cheapest flights available to Los Angeles over the Coachella period.

Since the festival is held a few hours inland from Los Angeles, we checked the prices for transportation and found Greyhound tickets available for just US$46.50 (AUD$63) return from Los Angeles to Indio, California.

So how does this all add up?

Here's how you can package your own trip to Coachella from just $,1715.50 per person.