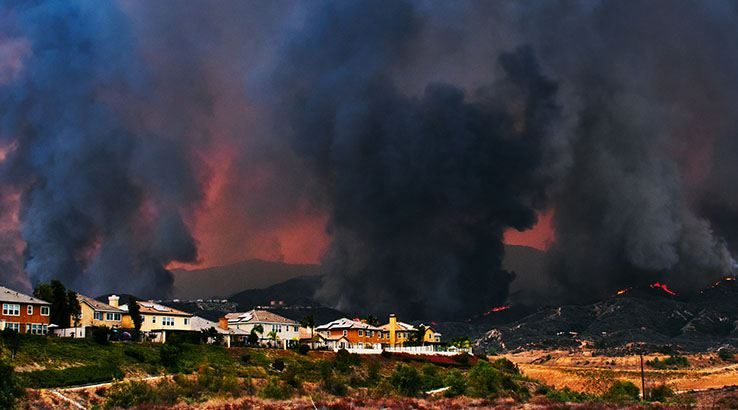 How will the "new normal" affect insurance policies?

This week New South Wales was ravaged by bushfires, reaching a catastrophic fire rating for the first time since it was introduced 10 years ago. With more fires predicted this summer there are questions around just how these unprecedented and extreme weather events affect Australian's insurance policies going forward.

Both the Bureau of Meteorology (BOM) and CSIRO have reported that there has been a notable increase in fires due to climate change. In the BOM state of the climate 2018 report, the authors stated that "There has been an associated increase in the length of the fire weather season, climate change, including increasing temperatures, is contributing to these changes."

And it's no wonder why. North Australia, encompassing the Northern Territory, north Queensland, and north Western Australia, is a high-risk disaster zone, prone to cyclones and flooding.

The inquiry found that home and contents insurance premiums in northern Australia have risen by 130% in the last decade and are considerably higher compared to the rest of the country. The average cost of a combined home and contents insurance policy in north Western Australia sat at $3,500 a year, followed by North Queensland at $2,400, and the Northern Territory at $2,220. In contrast, the average cost in the rest of Australia is half that, at just $1,300. These issues are not limited to Australia. After the California wildfires in the USA in 2018, where 85 people died and 11,000 homes were destroyed, scientists have warned of serious consequences not only to the environment but also to insurance policies if the climate crisis isn't addressed.

In an interview with the Guardian in March 2019, Ernst Rauch, chief climatologist of global reinsurance company Munichs Re, warned that natural disasters like this will have a serious impact on the cost of insurance in the future, making insurance something that only the rich can afford.

"In the long run it might become a social issue," he said. "Affordability is so critical [because] some people on low and average incomes in some regions will no longer be able to buy insurance."

What happens if more locations in Australia become too expensive to insure?

In June this year, the Insurance Council of Australia (ICA) made a public statement addressing the impact of climate change on insurance.

The ICA has presented several concerns about how climate change will affect the insurance industry and the wider Australian community, with one of them being the need for "suitable and affordable insurance products".

This suggests not just the need to make insurance affordable in the future for those in high-risk areas, but also to ensure that these same policyholders are being protected for threats that are most likely to occur to them.

Chief Operating Officer of Huddle Insurance, Andy Carey, is aware that cover in North Queensland is already an issue.

"At Huddle, we look at every risk individually based on exposure and likelihood of an event impacting the property," Carey told Finder. "These are all taken into consideration when offering home insurance products and in some cases, we are unable to offer the applicant insurance. We recognise this as being problematic and will continue to work with underwriters to understand what solutions there may be to solve this issue."

The shake-up that the industry needs

According to Carey insurers and underwriters need to start employing more advanced technology in their processes. He says that Huddle has built its business on the back of smart technology and customer service to deliver insurance that costs less. "Insurers have a long history of innovation and Huddle is a testament to that...smart application of technology is the future of insurance," he said.

Carey says that Huddle Insurance offers bot-powered technology, which allows users to lodge their claim through an app, and in some instances, get approval within minutes. The insurer is also a Certified B Corporation, which means it invests money in companies that have a positive impact on the planet.

When it comes to the role of the government in the climate crisis, Carey is blunt. "A clear and globally consistent climate policy and a plan to transition to renewables would help reduce the uncertainty faced by insurers and other businesses," he says. "Climate change is already impacting insurance. The increasing frequency of floods, fires, storms and surges are all contributing to premium increases."

Claiming on your home insurance after a bushfire

If you've been affected by the bushfires, or are concerned that you may need to make a claim, here's what you need to know.

The Insurance Council of Australia has declared the New South Wales North Coast fires a catastrophe, and as a result claims in these areas will be prioritised first. Here is its recommended plan of action:

Worried about your home insurance? Compare and update your policy today
Picture: GettyImages