Circle: Decentralised cryptocurrency exchanges have a long way to go

Decentralised exchanges are moving quickly. It just seems slow because there's so much ground to cover. 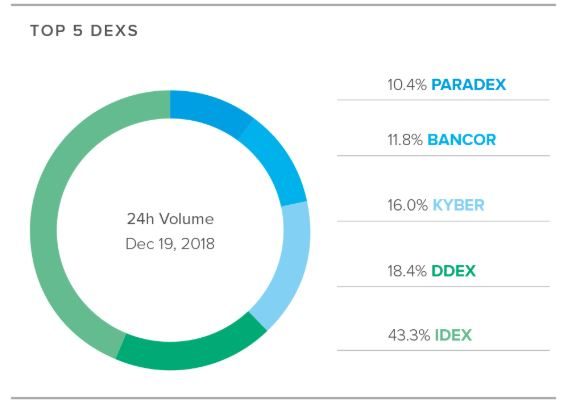 As Circle notes, there are over 250 decentralised exchanges either currently operating or under construction and over 30 DEX protocols. The most popular DEX protocol is 0x, although as a protocol it's still working hard to attract more marketplaces and liquidity providers to its ecosystem.

This is one of the main challenges remaining for decentralised exchanges.

In fact, about 99% of cryptocurrency trading volume is done on centralised rather than decentralised exchanges.

"DEXs currently have inadequate liquidity in a classic case of the chicken-or-the-egg," Circle explains. "Traders are attracted to platforms that offer liquidity but platforms need traders to aggregate liquidity. In the last 24 hours as of this writing, the top five DEXs had about $3.2 million in volume (30,700 ETH) versus $7.5 billion in combined volume on the top 5 centralized exchanges."

Note that the exact numbers should be taken with a grain of salt though.

Firstly, Circle's figures are from about a month ago. Today – using the same sources Circle did – the 24 hour volume of the top 5 DEXs is showing at about 13,000ETH (US$1.56 million), compared to about $4.2 billion on the top 5 centralised exchanges. Both are lower now, but DEXs seem to have picked up a larger relative share now than a month ago.

There's good reason to believe that despite their problems, decentralised exchanges are gaining market share month on month. The actual numbers are still impossible to determine though, and even if DEXs are growing they still have major issues ahead of them.

The trouble with decentralised exchanges

On paper DEXs are a highly-secure and censorship-resistant way for users to anonymously trade tokens, including those which they can't trade elsewhere. But real life is less comfortable, and Circle notes seven key obstacles yet to be thoroughly resolved.

On the UX side, DEXs tend to be clunky. Many of the frictions can be ironed out with more investment in UX, but it's not yet possible to solve the inherent problems associated with on-chain transactions. Centralised exchanges can process trades almost instantly, while DEXs have to actually settle things on the blockchain which can take entire minutes. They are also much more reliant on smart contracts and don't generally facilitate cross-chain transactions the way centralised exchanges can.

However, the biggest problem might be that it's extremely difficult to strip away all vestiges of centralisation, which leaves glaring weak points which tend to be exploited.

If there's a single service provider hosting the exchange then it can be attacked. This happened to the EtherDelta DEX in December 2017, when an attacker took over the exchange's DNS (domain name service), and redirected users to a fake phishing site.

Even though the exchange itself was decentralised(ish), the website used to access that decentralised wonderland was still a central point of failure which could be, and was, attacked. Users thought they were using EtherDelta to trade, when they were in fact just making deposits to the attacker's wallet. It's estimated that at least $200,000 of cryptocurrency was lost.

The Waves decentralised exchange was also subject to a canny attack in July 2018. An attacker found out which web hosting company was hosting the Waves DEX website, then impersonated the Waves team lead and convince it to change the password. They reportedly had a fake ID made up to help it happen. Because it was a DEX, the attacker couldn't get at user funds. Instead, they took advantage of their access to send a blast of phishing emails to all users in search of sensitive information.

If there's a weak point an attacker will find a way to exploit it. It's not yet possible to completely shed centralisation in a DEX, which tends to leave weak points subject to exploitation.

Centralisation as a vulnerability to regulatory attack

One of the problems might be that even something as seemingly innocuous as a brand name or an identifiable developer can be a centralised weak point for a DEX.

To pick on EtherDelta some more, there was a period of time when EtherDelta was rumoured to have been sold to a conglomerate of unhinged Chinese investors. Theoretically if it was entirely decentralised there wouldn't be any tangible asset to actually buy or sell.

More recently this became even more of a problem, when EtherDelta founder Zachary Coburn was found to be liable for the unregistered security trading that occurred on the DEX. It's ostensibly decentralised, but as long as there's an identifiable name and face behind the exchange, then that person can also be a centralised point of failure.

This semi-centralised is the most common state of affairs for DEXs, Circle says. Instead of asking whether or not an exchange is decentralised, the key might be to ask how far along the road to decentralisation it is, or in which ways it still is centralised.

It's still a long road – and we're still learning how to measure the actual length of the road – but as Europol and others have made clear, there's little doubt that decentralisation is coming to crypto exchanges.