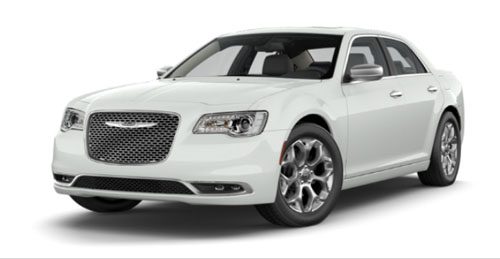 Avg. critics score: 67.25%
4 critics
How did we calculate this? We analysed and aggregated the scores of Cars Guide, WhichCar, Car Advice and Drive to bring you the finder.com.au score. This is a comprehensive score that brings together the four different expert ratings you see below.
Finder.com.au is personal finance comparison site that provides you with the tools you need to make better decisions. Learn
how we work and how we make money.

How does the Chrysler 300C compare with its peers?

Prices for the Chrysler 300C start at $59,900. The 300C is available in bright white or gloss black as standard. Metallic paints are $500 extra. The 300C Luxury is available only with a 3.6-litre Pentastar V6 engine and an eight-speed auto. Optional accessories are available from Mopar.Prices shown are drive-away prices for postcode 2000.

The Chrysler 300C Luxury is a powerful, well-appointed sedan. Road testers liked the look of the 300C, appreciating its brutish and aggressive styling. Journos were pleasantly surprised with its adept handling, despite the comfort-tuned suspension. The 300C is the car to go for if you want an extremely well-equipped car with a large-engine that is perfectly suited to travelling hundreds of kilometres in a day. It’s also the car to go for if you want something a bit different from the norm and can stomach the thirsty but grunty V6.

Reviewers generally praised the 300C’s 3.6-litre Pentastar V6. The engine outputs a reasonable 210kW of power at 6,350 rpm and 340Nm of torque at 4,300 rpm. What really impressed motoring journos was the smooth delivery of the engine’s power and torque.

One reviewer wrote that the V6 is ideal for steady cruising on the open road and described the engine as performing responsively during every sort of driving. Drivers described the sound the engine makes as sweet and vocal, with an underlying satisfying burble.

According to testers, the naturally aspirated V6 revs freely and has good low-end pulling power. Where it does come slightly unstuck is the car’s massive weight when empty – a mammoth 1,724kg! The increased mass does impact on acceleration and it’s apparently most noticeable when pulling off from the lights; however, the car does make good progress when pressed and doesn’t dawdle.

A rotary dial shifter located on the lower centre console operates the gearbox, which is quickly becoming the norm these days. In addition to all conventional driving modes, there is an “S” position (for sport), which alters the transmission’s mapping and improves throttle sensitivity, holding gears for longer as well as reducing the time taken to shift gears to just 250ms!

According to Chrysler, the 300C Luxury will use 9.7 litres combined per 100km: 7.1 litres per 100km on the highway and 14.3 litres per 100km around town. While it isn’t particularly fuel efficient, Chrysler has optimised the car for the best possible fuel consumption through the use of a light-weight aluminium rear axle and housing as well as the aforementioned eight-speed auto.

Fuel consumption is the main gripe motoring journalists mention the most, with real-world fuel economy proving much higher than the factory-provided statistics. Around town, in typical congestion and traffic, some testers saw the fuel usage rise way above the official figures.

The Chrysler 300C Luxury surprised a lot of journalists, with its very un-American handling. When thinking of an American vehicle, you often think of floaty suspension, vague steering and a poor turning circle. The 300C is the complete opposite. Although this car is best suited to cruising for hours on end down the highway, it’s also quite adept when the road veers to the left or right.

The suspension is soft, which irons out any bumps in the road surface and the ride is comparable to a “magic-carpet” according to one driver. Body roll is present but kept in check and the 300C really benefits from its “touring-tuned” independent suspension. The American sedan is said to ride straight and true, even over corrugations or road camber changes; however, some journalists felt the over-size 20-inch rims caused the dampers to work extra hard on rebound, unsettling the handling momentarily.

The heated steering wheel connects to an electro-assisted rack and pinion mechanism, which feels light, with some drivers noting a touch of play in the middle, requiring a fair amount of wheel movement to get the car to turn. Then again, this is a large, heavy sedan so that makes sense. Almost all reviewers agreed the car is sure-footed and predictable, even when pushing hard into the corners.

Some luxury sedans have soft, spongy, undersized brakes, but the 300C has impressive anchors that bring the vehicle to a stop with no fuss.

Chrysler markets the 300C as a luxury model. The list of equipment that comes as standard is extensive, and you can get optional extras from both Chrysler and Mopar.

It’s little wonder that reviewers found the spec and comfort levels impressive. There’s plenty of room for all passengers, even when carrying four passengers plus the driver. However, some observed that the low-lying roof gets in the way when clambering in and restricts rear headroom.

The car is very much a cruiser and is well suited to long-distance journeys.

The 300C is a cruiser, perfectly suited to driving over long distances. It’s comfortable with a cushy suspension that smooths out uneven roads and the V6 sounds great, performing equally as well. The 300C Luxury doesn’t really want for anything, with more standard features than some manufacturers offer as options. This is a thoroughly modern American car that delivers in every department.

Compare some options to finance a Chrysler 300C