The Chromecast Ultra offers a simple way to send your content to the big screen, but consider your alternatives carefully.

Google's Chromecast plug-in devices, including the 4K-capable Chromecast Ultra, have been available in Australia for a number of years now. With the wider availability of streaming services and competing devices that include Chromecast compatibility built in. However, the question is raised as to whether Google's in-house solution is the best match for your streaming needs.

There's really nothing that looks quite like the Chromecast Ultra, except Google's cheaper $59 2nd generation Chromecast.

It's a small device that hooks into your TV via its own HDMI cable. That has some implications for long-term durability in comparison to other streaming options, simply because if the HDMI cable fails or frays for any reason, it'll take the Chromecast Ultra with it.

That small size does give it one unique advantage over other recently tested streaming boxes, simply because you can hide it rather easily behind your TV, presuming you haven't gone for a wall-mounted solution. If you don't like the cluttered look that many streaming boxes give you, this could be a big plus.

The included power adaptor for the Chromecast Ultra also gives it a little more flexibility, simply because it includes an inline ethernet adaptor. If your home router is close enough to your TV, you can skip over any and all wireless streaming issues by hard wiring your Chromecast Ultra through to your Internet connection. 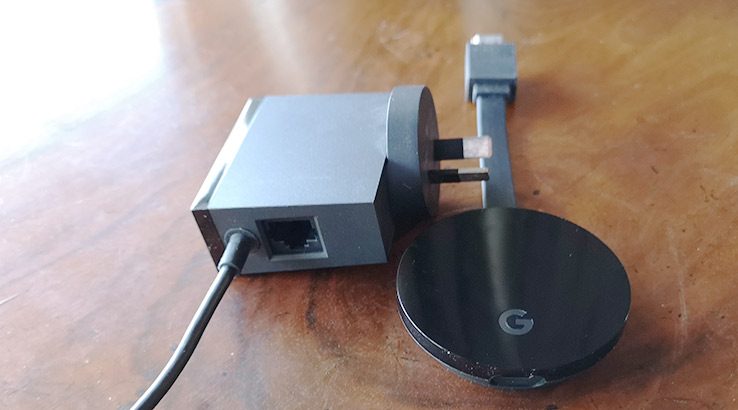 It should then see your new Chromecast, which will advertise its name in the meantime on your TV screen, and ask if you want to set it up. Tell it which Google account you want to use, your region and the room you're placing it in. That's really only important if you are including it as part of a suite of Google Home devices for smart home operation. If you're connecting via Wi-Fi you have to tell it which network to use, and you're essentially then done, and met with a more or less blank screen on your TV.

This is where you need to understand the difference between the casting-capable Chromecast family and your other streaming options. 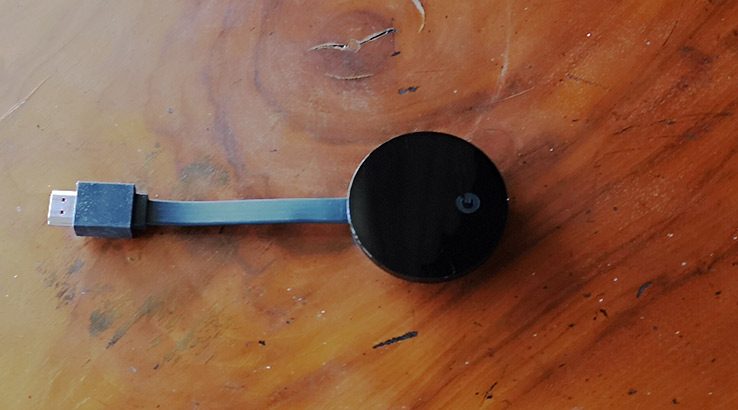 Where other streaming boxes include remote controls and onscreen interfaces, the only content the Chromecast Ultra will show you by default will be a range of pretty pictures, along with its identifying name as chosen during set-up. There's no remote control in the box, and there's no real user interface on your TV.

That's because the Chromecast Ultra works off the idea of casting content from a secondary device, rather than providing an interface or remote control. That means using a smartphone, tablet or computer using the Chrome Browser to "cast" whatever content you want to watch on your TV.

Thankfully the relative maturity of the Chromecast platform means that there's a lot of streaming applications that support cast functionality, including Foxtel Now, Netflix, Stan, ABC iView and Freeview FV.

In the case of YouTube, Netflix and Stan, if you've got a Google Home (or indeed, any Google Assistant-enabled smart speaker) on the same Wi-Fi network, you can control your viewing experience with your voice alone.

This does involve pairing your Netflix and/or Stan accounts through Google Home, but once that's done, you can start programs simply by asking your speaker to do so. There's something quite magical about voice controlling your TV, and it's much easier than finding a device and setting up a casting session.

The Chromecast Ultra supports videos at up to 4K resolution, but as with other streaming services, there's not much content that fits that resolution locally. What's available worked well enough in my tests, although predictably if you're on a weaker connection, or trying to watch 4K during the busy evening periods you may struggle.

Speaking of struggling, the other issue with the Chromecast Ultra's casting functionality is that when something does go wrong, there's often not much you can actually do about it. It's all but impossible to work out if the problem lies with an app, your wireless connection or the Chromecast Ultra itself, and that can be annoying. Comparatively speaking, the Chromecast-capable Foxtel Now box or Vodafone TV offer more options for troubleshooting, even if it's only because they offer an actual onscreen interface to work with. 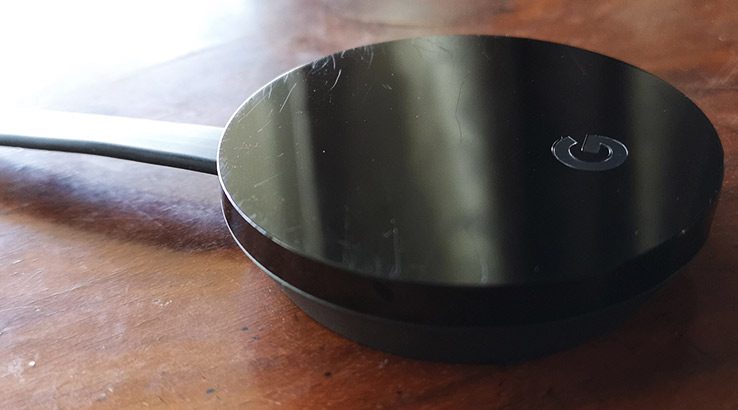 The Chromecast Ultra is a more capable device than the standard Chromecast, and it's also slightly faster, but it's very much a product that benefits from integration within the Google smart home family and a willingness to tinker.

If what you want is an entirely guided experience, and especially if you don't want to have to shift content to the TV via another device, the Chromecast Ultra might not be for you.

It's also something of a tough sell at its asking price, simply because in the period since it launched, Foxtel has launched its Foxtel Now box, and Vodafone its Vodafone TV box. Either of those devices has Chromecast 4K capability built in, and in the case of the Foxtel Now box, at the same price point as the Chromecast Ultra.

The Chromecast Ultra retails in Australia for $99 outright.

There's a wide range of choices open to you in the streaming space right now. If you're happy tinkering but don't have a 4K TV, you could save a few bucks and opt for the $59 Chromecast instead.

The most obvious competitor is the $99 Foxtel Now box. That's a device with a full UI and access to most, but not all, Android TV apps.

Foxtel locks down some apps it doesn't want appearing, and it does spruik Foxtel content above all else, but if you're keen on that functionality it's well worth considering. There is a tradeoff there simply because the Foxtel Now Box can be a little less stable than the Chromecast Ultra, but that's the price you pay for app compatibility. It's also worth noting that the Foxtel Now Box lacks direct Netflix functionality.

If you hanker for a more open Android TV experience, the $120 Vodafone TV should also be on your radar.

Telstra promotes the Telstra TV 2 as your one-stop shop for streaming services, via its rather locked-down Telstra TV device. However, that will only work for Telstra broadband customers.

Optus customers (or anyone after a more PVR-style system) should consider a Fetch box such as the Fetch Mighty or its smaller sibling, the Fetch Mini. That's a platform with inbuilt Netflix, Stan, hayu and YouTube app access, as well as Australian catch-up services, but there's no "app store" there for additional functionality.

In terms of a slick interface, if you're already in the iOS/Apple space, the Apple TV 4K still ranks highly with us, although there you're swapping Chromecast for Apple's Airplay functionality.

Chromecast Ultra: What the other reviewers say

Resolution
Up to 4K