The ultimate guide to cherry blossoms

Everything you need to know about Hanami and other cherry blossom festivals around the world.

However, few can rival the festivities in Japan where the symbolism and popularity make it a key part of the social calendar, popular among visitors and locals alike.

In 2017, the Japan cherry blossom season is expected to extend from April to May.

The spread is followed by meteorological agencies, news bureaus and naturally a lot of cherry blossom parties, part of what is now a centuries-old tradition. Thanks to the cherry blossom’s cultural significance, it’s possible to trace back the opening and peak blooms hundreds of years, based on old diary entries, and pick out the cold periods and the warmer seasons.

In recent years trends have shifted towards earlier openings with Tokyo starting the 2017 season ahead of other areas, and ahead of schedule.

The meaning of cherry blossoms

Hanami, or flower viewing, is all about enjoying the temporary beauty of flowers as they bloom and disappear and about celebrating the end of winter and the arrival of warm weather.

The origins can be traced back to well over a thousand years ago when poets of the time would see the blossoms as a metaphor for humanity itself, with each flower being unique in its own way yet fated to a short life.

Sakura, as it came to be called, referred to the celebration of life beneath the cherry trees. Today the symbolism remains and yozakura (literally night sakura) refers to the cherry blossom parties that can be found around Japan.

When is Japan’s cherry blossom season?

The two key times are the first blooms (mentioned above) with full bloom usually coming a couple of weeks later. This is when the parties are in full swing and the viewing is at its best. The times for both change each year, with warmer weather usually signalling an earlier opening.

Where to see cherry blossoms in Japan

You can find hanami festivals wherever there are cherry blossoms, but some regions in particular have cultivated spectacular gardens which draw visitors from all over.

The Imperial Palace in Tokyo, as well as a number of famous gardens, present a range of opportunities and space for everyone in this world city.

Many popular day spots turn into party destinations at night and some of the best cherry blossom spots include:

Osaka is one of Japan’s main destination cities and is used to hosting visitors drawn by its rich history and stunning beauty, both natural and man-made. Some of the top cherry blossom spots, and Sakura party venues, are built around these. 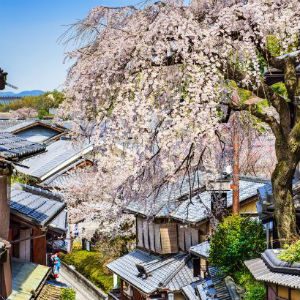 While cherry blossoms aren’t as abundant in Australia, the largest Japanese garden in the southern hemisphere is in Cowra, NSW, and hosts its own Sakura Matsuri festival on 23 September in 2017.

To enjoy cherry blossoms elsewhere you can head to Australia’s highlands in the southern areas around Sydney, Melbourne, Adelaide and Perth. Peak bloom usually comes in mid-October and you’ll notice them here when planted in gardens, as small town street trees and elsewhere.

Cherry blossom season in Korea is a significant time of year, symbolising the end of winter much like it does elsewhere. If you’re in Korea around the end of March or start of April you can find numerous festivals around the country. Some of the most prominent include:

Cherry blossoms in the USA 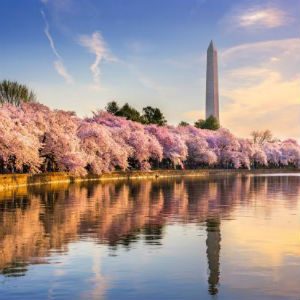 Cherry blossom tours around the world