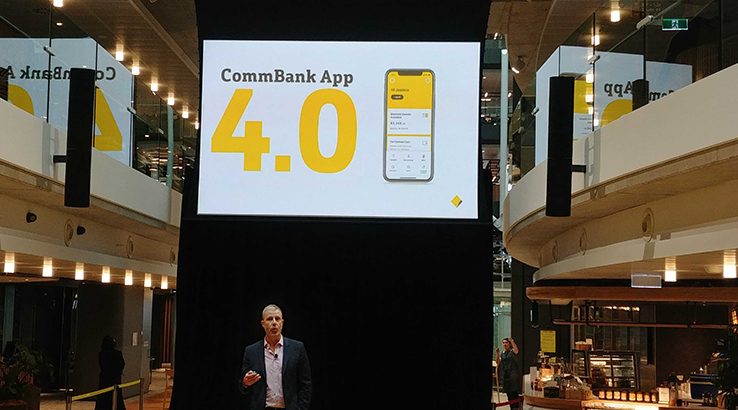 The new version will allow you to personalise your experience.

CommBank has unveiled an updated version of its app, which now comes with customisable features, personalised notifications and various other design and functionality improvements. The CommBank app was first released in 2013 and currently has 5.6 million active users, which the bank hopes to better serve with the updated version.

"It's a fresh new look and feel. It's quite unbank-like," said CommBank's executive general manager of digital Pete Steel at the app's launch at an event in Sydney on Wednesday.

According to Steel, it was important the app was simple, smart and secure.

"One of the first things we focused on with simplicity was making it feel like it was your app," Steel said. "It's targeted and personalised and customised for you, by you. So it's customisable like an iPhone and personalised like Netflix recommendations."

CommBank users will be able to change the app's home screen based on their preferences and tag their favourite functionality. Using artificial intelligence (AI) and data, CBA will call attention to different things on the user's dashboard. The app will also come with personalised notifications to help CommBank customers better manage their money.

"We looked at the average number of transactions that we all have going through our bank accounts every year: 1,320. That's a lot of noise to keep track of," said Steel.

"One of the things we're doing is we are looking through all those transactions and bringing customer attention to the most important things."

These notifications are varied but can include things like double payment of a bill, notifying when a subscription cost increases and ensuring customers have sufficient reminders when credit card bills are due.

"We are just as passionate at shining the light on fees and charges in financial services as well," he said of the credit card notifications. One useful feature for customers includes a benefit finder that will help them identify rebates they may be entitled to from the government and from utility providers. In a recent 6-month trial run by CommBank, they identified benefits to users in NSW and Victoria, and over 100,000 claims were made.

"We are going to be scaling this up from 40 rebates to over 250 rebate types across the country," Steel said.

The bank will also provide spending visualisation tools in the app to help users understand their finances better. Users will receive real-time alerts into their spending behaviour, with the bank leveraging technology such as machine learning and deep data analytics.

Accessibility has also been given a focus in this upgrade with Steel saying the app will pick up phone settings for things like font size to ensure the app is accessible.

"We want to be the bank for all Australians," he said.

The new features offered in CommBank's app are not unlike those being offered by Australia's new digital banks and challenger banks that have been operating overseas. Apps from digital banks leverage technology to offer innovative features such as spending categorisation, bill detection and reminders and low-cost travelling.

Group executive of retail banking services Angus Sullivan said that while CommBank is "alive to the threat" of new digital banks such as Up, Xinja, Revolut and 86 400, which have all launched in the past year, the new version of the app was launched for CommBank customers.

"I would say that we definitely have one eye on what's happening from a competitive perspective," he said. "But the heart of what we've really tried to do here is listen to our customers and understand how we can help them better."

However, he did admit that watching the developments of digital banks here and overseas can be a good source of inspiration.

"The developments that we sometimes see overseas is a good source of inspiration, or how do we take something and adjust it to make it even better."