CBA and 17 tonnes of almonds on the Ethereum blockchain 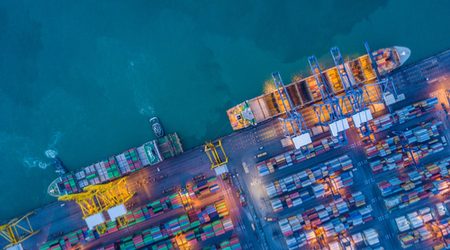 Simply having better access to data makes a huge difference.

On the surface, it was a relatively straightforward trial, called Trade-chain. A shipment of almonds was tracked from Mildura, Australia to Hamburg, Germany on the blockchain, facilitated by different parties uploading their data to the Ethereum blockchain in addition to just keeping it in their own silos as usual.

The parties included Olam Orchards Australia whose almonds were being moved, Pacific National for rail haulage, the Port of Melbourne, Patrick Terminals and the OOCL Limited shipping company.

And the results, said Commonwealth Bank (CBA), might well be a foundation for the future of global trade.

"By bringing together partners from across the end to end supply chain and developing a new platform underpinned by emerging technology, blockchain and IoT, we were able to prove a concept to modernise global trade," said Alex Toone, managing director of Global Commodities and Trade at CBA.

A supply chain is made up of different links, such as Pacific National on the railway and OOCL once the goods are on the ship. This fragmented approach, coupled with legacy systems in which each party only handles information regarding their own link, means it's difficult to get a true end-to-end view of the entire supply chain without data gaps and impossible for all parties to get an easy real-time view of a shipment's current status.

Being able to access this information lets businesses make more agile decisions based on what's actually going on at the time, reduces the amount of time and money spent moving paperwork, allows for ongoing improvements by more easily identifying bottlenecks, letting businesses adapt to problems before they occur and more easily find the cause after they occur, reduce one's reliance on supply chain finance for even more savings and a whole lot more.

Uploading information into a shared database might not sound like a revolutionary breakthrough, but the current status quo involves a lot of flying blind and for each participant to put a lot of trust in all the other links of the chain. As such, part of the reason it's such a breakthrough is that the legacy systems are just so inefficient.

Significantly, with a standard distributed ledger system used by the entire industry, it also becomes much more feasible to just "plug in" new third parties where necessary.

The other part might be that blockchains can theoretically be tamper-proof and can connect parties that don't necessarily trust each other in ways that weren't previously possible, for even more efficiencies and cost savings. For example, an insurer might create an entirely new product that can cover goods as it changes hands across the entire supply chain, rather than each link of the chain needing its own separate insurance to cover goods while they're in its possession.

Simply having access to more information can deliver substantial efficiency benefits, while standardising these systems can compound them.

But there's still the question of finding the ideal blockchain for this.

CBA used Ethereum, but noted that other options might be better in the future, and that this particular experiment let all parties view the blockchain information which naturally wouldn't work for the real thing going forwards.

"Ethereum currently has the most development activity globally, and offers the functionality we require. However other blockchains are developing rapidly and CBA remains open to other options in the future," the bank said in a statement. "In a future commercial environment the access rights may be more restrictive, allowing participants to protect commercially sensitive information and restrict user access to the relevant information only."

This is CBA's second blockchain supply chain test, with the first being in 2016.