If you dig puzzles over action this port of Captain Toad: Treasure Tracker is well worth excavating from the Wii U era.

Since we first met him in 2007's Super Mario Galaxy, the good Captain has stood out from the crowd. He's refused to conform to the rules, standards and stereotypes of his mushroom brigade brethren. He's never toad the line.

This mushie man doesn't exist merely to keep track of which Princess is in what castle. Cap is a diminutive version of Indiana Jones: a spirited loot hunter who cannot leap to save his life in a platforming world, spore's the pity.

While we're managing expectations here, I should like to warn you Switch newcomers about what you're really buying into here. This is a port, not a remaster. Captain Toad: Treasure Tracker was a 2016 Wii U title which was a spin-off of some novelty bonus levels that were sprinkled through another Wii U game, Super Mario 3D World. Nintendo diehards will be very familiar with the bulk of content here. 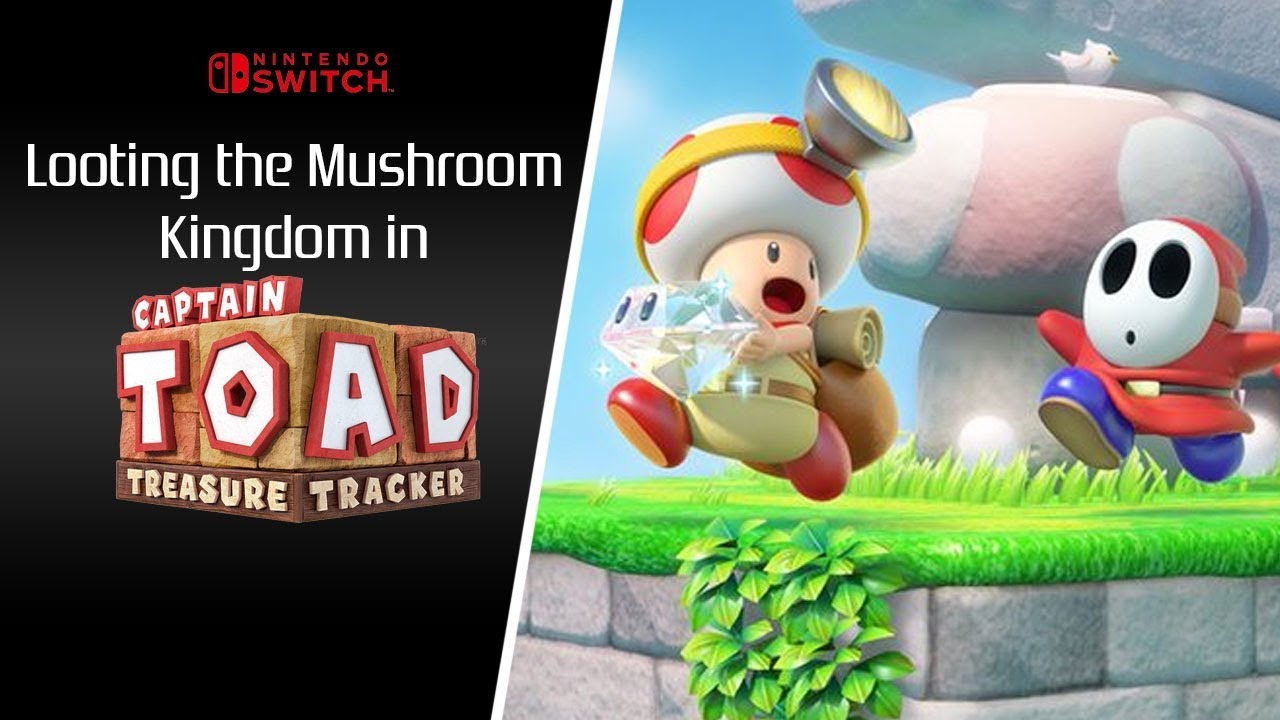 The central concept is as simple as it is addictive. Using Cap'n or his offsider, Toadette, you need to trudge through diorama-like cube levels that are honeycombed with caves, collectables and filthy Goombas. All of the above won't be immediately obvious to you from the get-go. You'll need to pivot the camera this way and that to peek into these little puzzle box worlds.

There are over 70 on offer and new challenges and thematic gimmicks are steadily layered in as you trundle along. Sometimes it'll be new power-ups to wrap your head around – like a Super Pickaxe that allows a short window of brick-bashing mania, a Double Cherry that clones you, or the Super Shroom that embiggens you into a juggernaut. Other times you'll have to be wary of typical Mario enemies who have been given an odd twist. Cat Goombas and Piranha Creepers anyone? 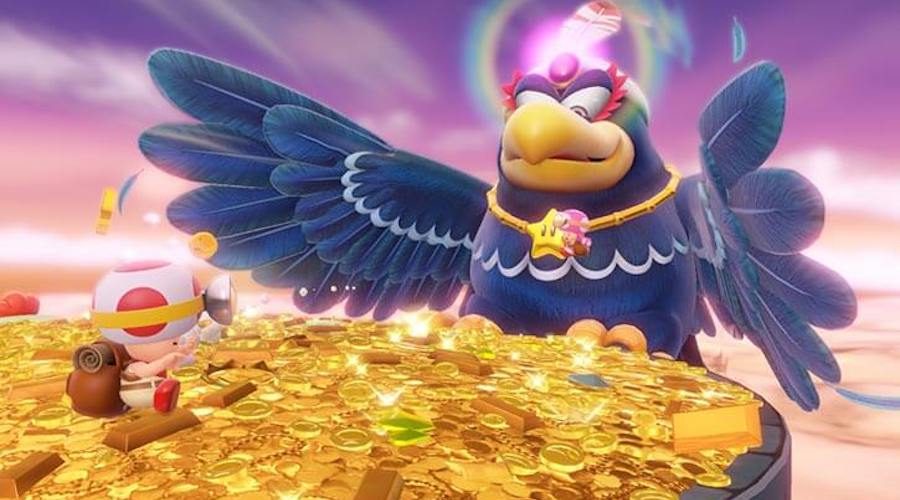 Nintendo plays a little with controller gimmicks, too. While navigating the world with traditional stick controls you can use your right JoyCon (or the touchscreen itself) to make interactive taps on the world. An early example: toggling sliding platforms to alter the topography of the world. Ramps can be made and hidden entrances to cave systems may be revealed as well. Sniffing out all three super gems in a level and making it to the exit never fails to make you feel smart.

Overachievers can also replay levels to satisfy mystery bonus conditions. Sometimes the task will be to find a Gold Mushroom. You might also be asked to solve platform sliding puzzles with the minimum amount of movements, or the goal may be to slaughter every single bad guy in the level (which is surprisingly brutal for a Nintendo game).

The narrative is nothing to write home about. It's typical Nintendo fare that features cutesy characters and an over-reliance on the kidnapping tropes and by-the-numbers boss battles. It's all engaging enough and I found the episodic collection of four books pretty impossible to put down.

Interestingly, the final bonus book includes an exclusive series of Super Mario Odyssey-themed levels known as "Mini Tour Courses”. Basically, you'll get a small handful of challenges based on Odyssey haunts like Metro Kingdom, Sand Kingdom, Cascade Kingdom and Luncheon Kingdom. Sadly, these Odyssey offerings replace the Super Mario 3D World levels we got in the Wii U version, which feels a bit stingy. 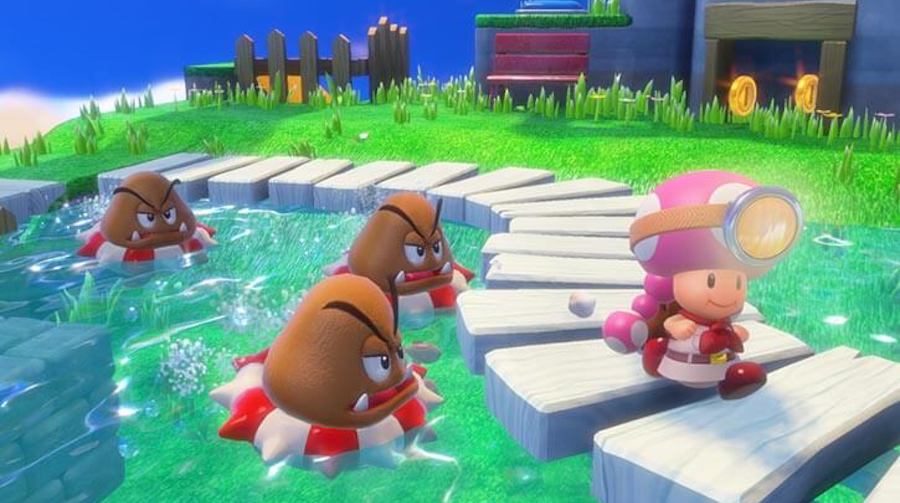 The best upgrade you're getting here is a two-player co-op mode that wasn't present in the original. Essentially, one player does all of the (stubby little) legwork as Captain Toad while the other is in control of the pointer and the camera. Admittedly, having somebody swing your world view around is disorientating unless you use a system of verbal warnings. The second player also proves to be useful as a means to reveal coin hiding spots, plus they can pelt turnips at enemies. It's fun, but not the “two on-screen Toads” solution that I was keen to play.

Should you play this in portable or TV mode? Both have pros and cons. In TV mode your touchscreen functionality is replaced by an inescapable and clunky blue pointer dot that is so twitchy it will seriously make you wonder if you might have early onset Parkinson's disease. You can avoid this eyesore by using portable mode and the touchscreen instead, but the resolution is going to drop from 1080p to 720p.

Whichever way it's consumed, Captain Toad: Treasure Tracker hasn't expanded as much as I'd like. There's simply no denying its charm and one-more-level addictiveness but there's not enough new here to recommend Wii U veterans return for a full-price purchase. That said, newcomers ought to keep track of this – the bite-sized nature makes it another lovely handheld treasure for the Switch.

We reviewed Captain Toad: Treasure Tracker on Nintendo Switch with a copy provided by the publisher.

If you dig puzzles over action this port of Captain Toad: Treasure Tracker is well worth excavating from the Wii U era. Uninspired co-op and a few new levels probably won't be enough to satisfy veterans though.