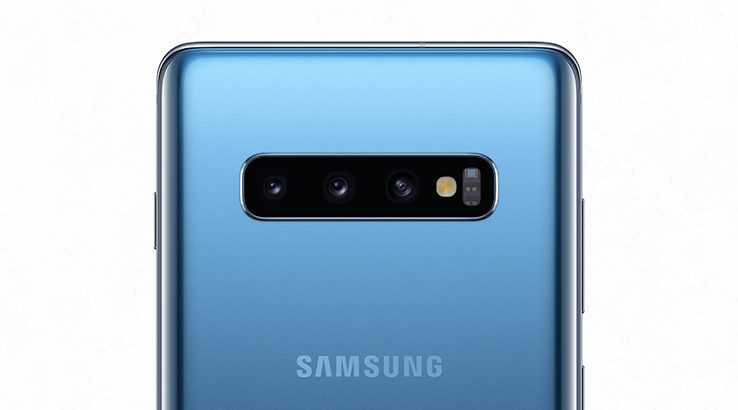 It's time to pit the flagship phones against each other to see who can deliver the most consistently pleasing low-light results.

I'm in the middle of putting together our comprehensive Samsung Galaxy S10+ review – stay tuned for that one – but a big part of that testing process involves putting its camera through its paces.

Smartphone camera technology, especially at the premium end of the market is a fierce contest and a rapidly moving one at that. Just about any smartphone camera can deliver generally pleasing results in fine light and with little in the way of movement. That's not much of a test in and of itself.

However, in low light, the smaller sensor sizes, differences in apertures and even software AI algorithms can play a huge role in producing images you'd be happy to keep and share. The Samsung Galaxy S10+ doesn't exist in a vacuum, so it made sense to pit it against as many flagships as I could muster. That's a straight up comparison, which is exactly what we do here at Finder, whether you're after a new mobile plan, new health insurance plan or a new credit card.

With that in mind, I set out late one night with a bag stuffed with premium phones and a fervent hope that no muggers were following me.

Specifically, I shot with a Samsung Galaxy S10+, an Apple iPhone XS Max, a Huawei Mate 20 Pro, a Google Pixel 3 and a Samsung Galaxy S9+. All phones were running on the latest available software updates using their respective default camera applications. The app itself was allowed to pick focus point and exposure for every shot. You could tweak that to effect, but the reality for most everyday smartphone camera users is that they just want to point and shoot.

Low light doesn't automatically mean pitch black. You're more likely to have a mix of light sources and lit and dark areas, which is what I wanted to test with each shot. 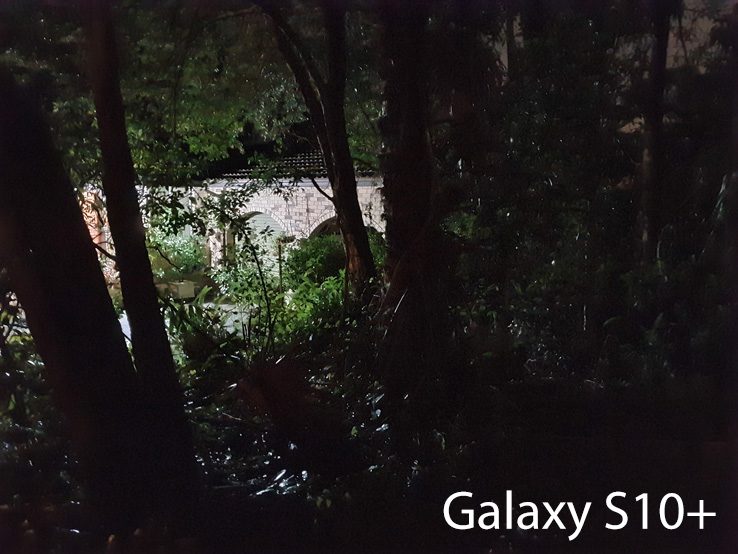 The Galaxy S10+ did a good job of capturing both the background detail and a little of the trees in front, for an overall good composition. 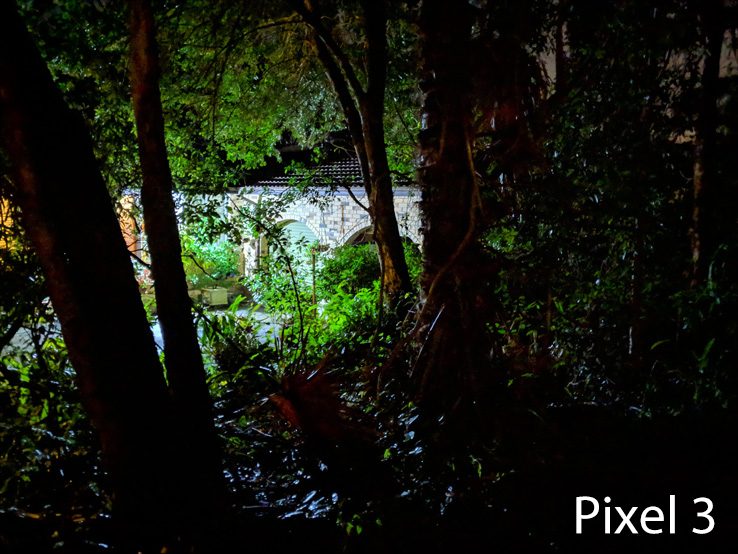 The Pixel 3's night sight mode did a good job with adding colour detail to the shot. 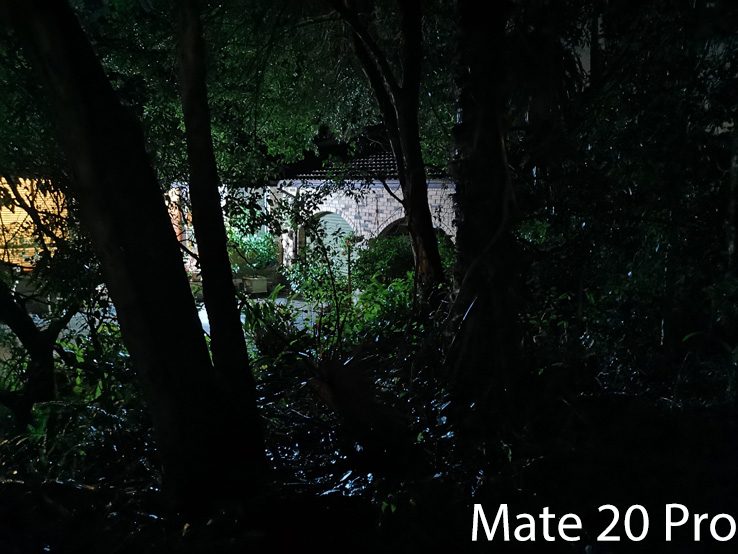 The Mate 20 Pro didn't capture as much front-facing detail, although the focus on the bricks in the background is pleasingly sharp. 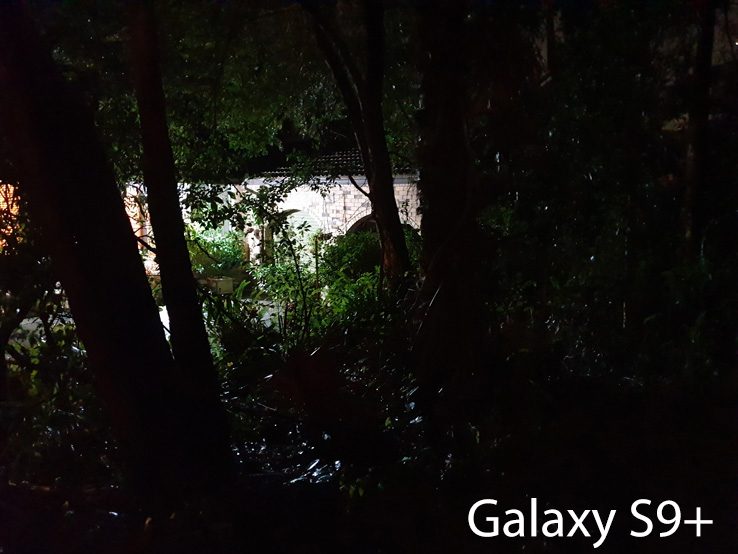 The Galaxy S9+ doesn't have a multi-exposure shot mode; it just opens up its aperture and does its best. It's not quite up to the Galaxy S10+, but it's still a decent shot. 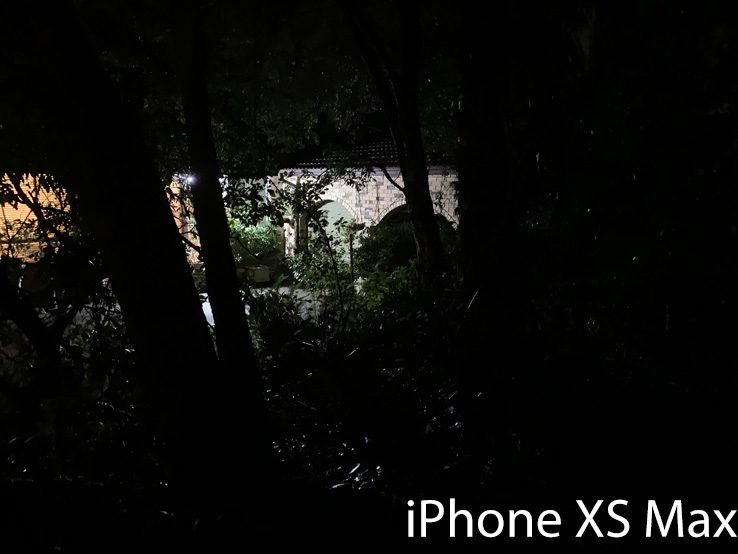 The iPhone XS Max struggles relative to its competitors, with a lot more missed detail in the darker areas of the shot.

Next, on to a local park. Yes, it's very weird to be hanging around a local park in the middle of the night, but it's also a good way to really torture a camera sensor to see just how much detail it can really pick up anyway. 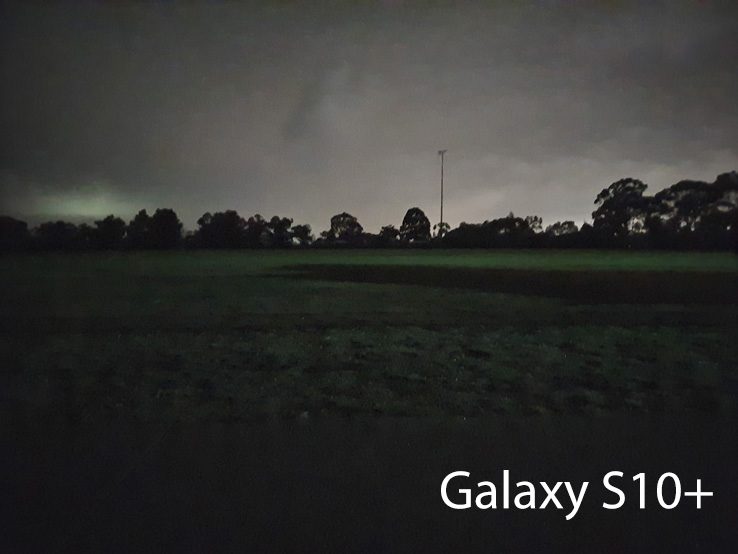 The night mode on the Galaxy S10+ kicked in immediately upon being opened, delivering a very good shot under some quite brutal circumstances. There wasn't as much light in this shot to the naked eye, and the S10+ managed very well indeed. 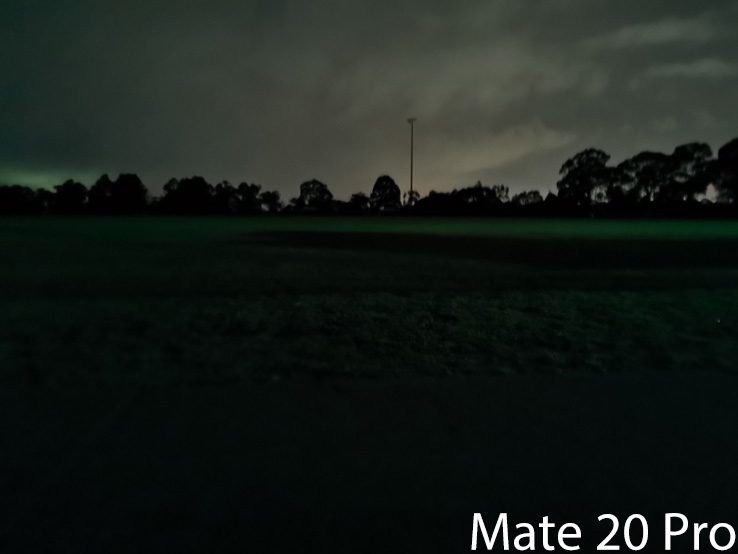 The Mate 20 Pro showed its low light muscle, but not to the same extent as that on the Samsung Galaxy S10+. 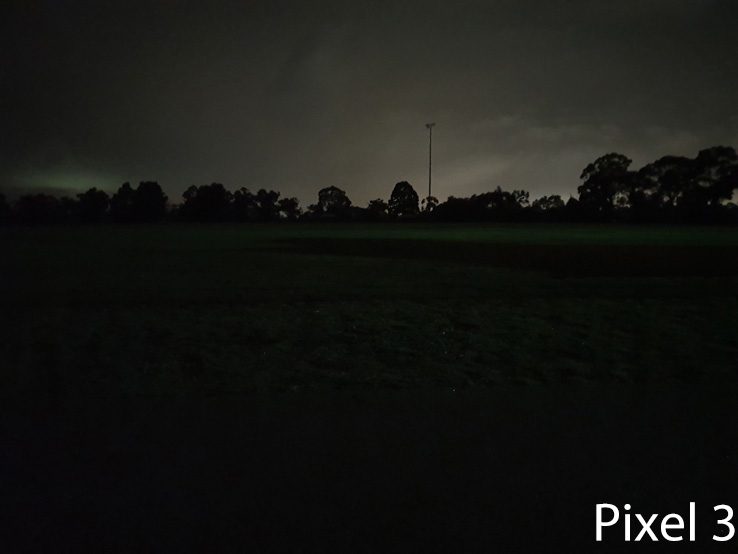 To give you an idea of how dark it actually was, this is how the Pixel 3 took its photo without using Night Sight – which, to be fair, it suggested I use as soon as it saw what I wanted to take a photo of. 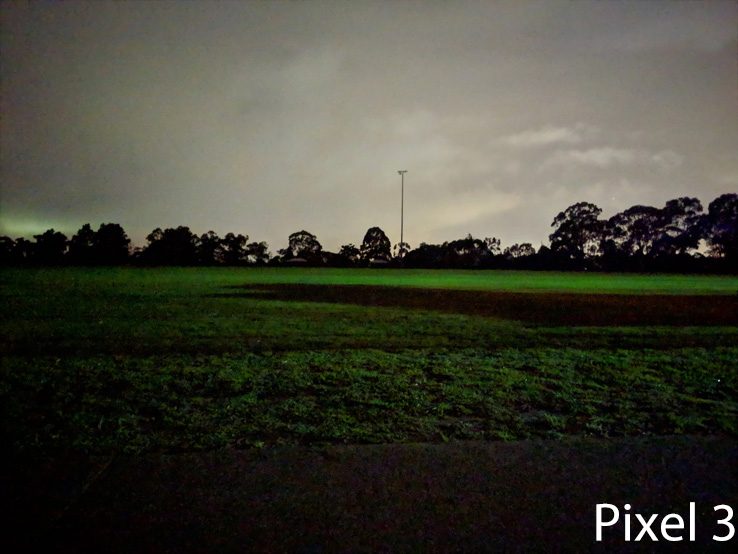 Not surprisingly, the Pixel 3 with night sight enabled takes a much better photo. The Galaxy S9+ struggled a lot with this shot, but again it doesn't do a multi-exposure shot the way other cameras in this test do. 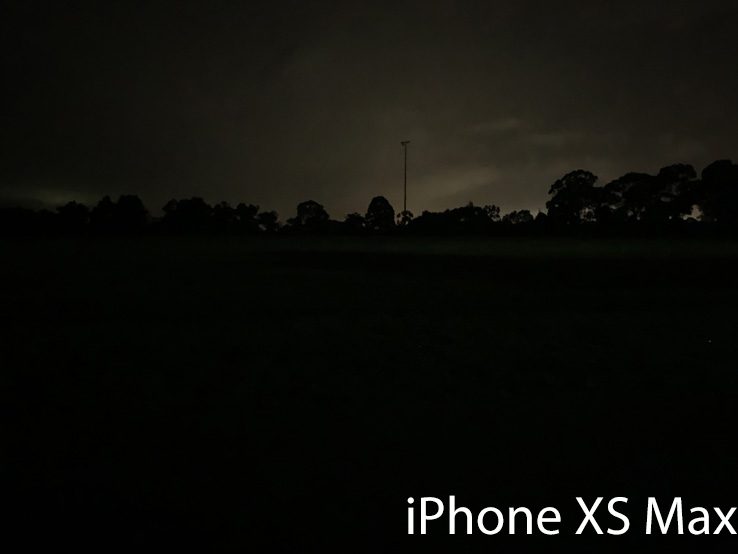 Still, the iPhone XS Max delivered the most murky shot of the lot. It's not an exciting composition, to be sure.

Now, possibly because I was torturing these poor phones, nature decided to have its own fun with me by upping the difficulty challenge and hammering down with rain. That's a bigger challenge for any smartphone, partly because you've got to keep the lenses dry, but also because the rain itself affects each picture.

At a nearby train station, I gave each camera a lot more light to play with, in order to see how each phone would interpret the scene in front of them. Alright, OK, it was also because it provided me with protection from the elements. All of these phones are at least IP67 rated, but it's no fun lugging around flagship phones in the cold, wet night. 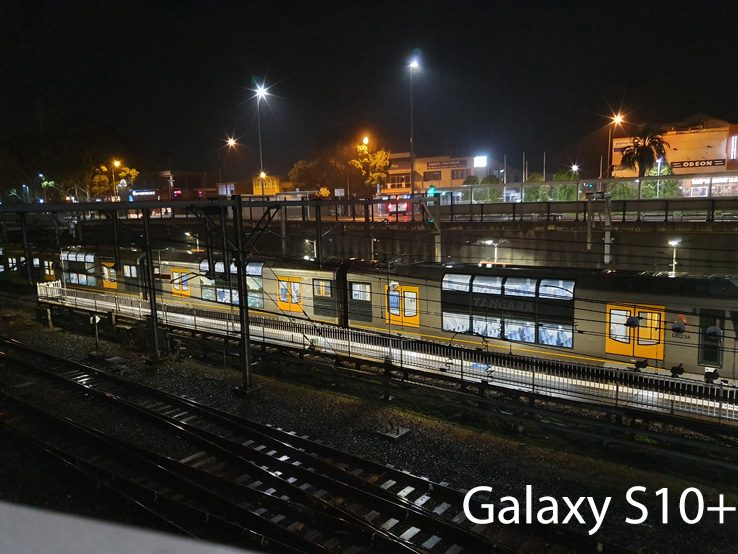 This was ultimately the one test where every phone delivered a pleasing and largely similar shot. The Galaxy S10+ has nice detail on the empty tracks at the front of the shot, as well as a clearer set of overhead lights than most other phones. 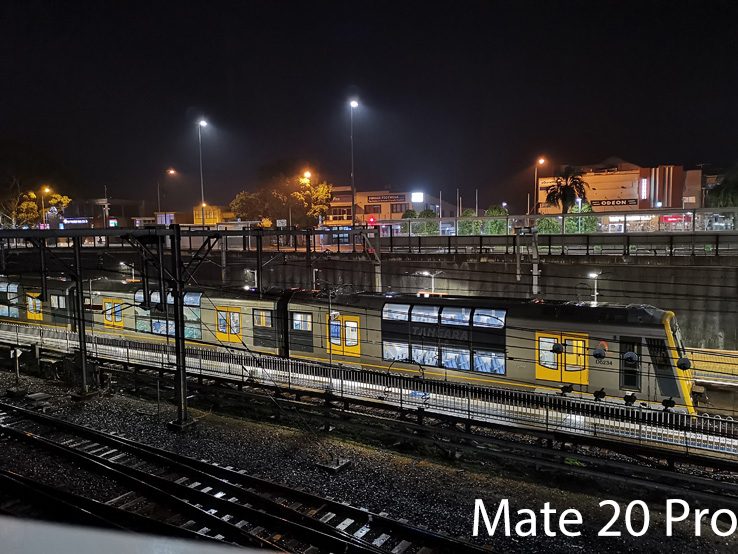 The Huawei Mate 20 Pro was the runner up by a very small margin over other phones for the way it handled the overall shot. 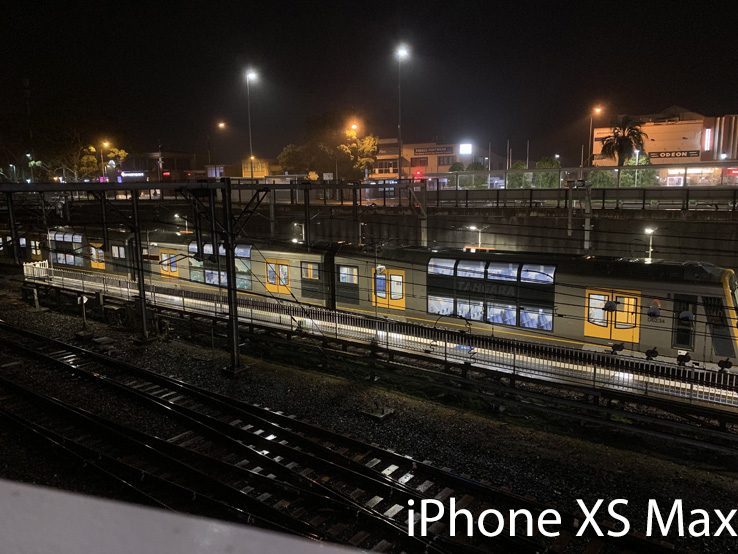 The iPhone XS Max does well for the most part, although it has the murkiest set of overhead lights of any shot in the series. 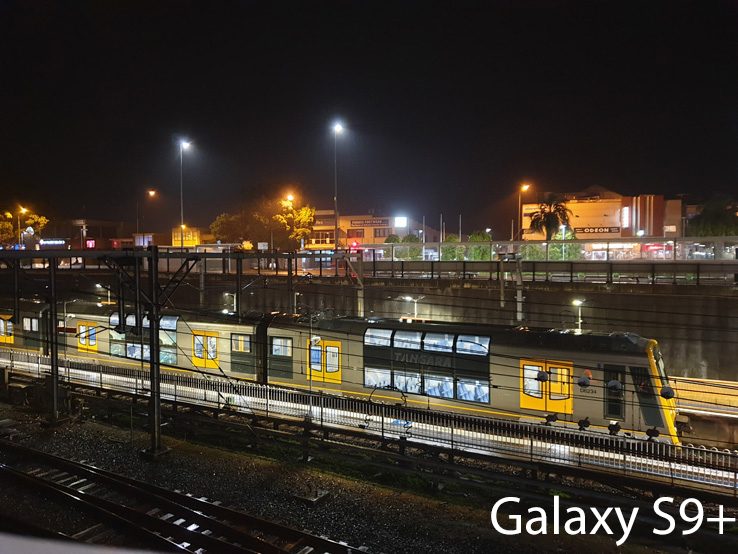 The S9+ makes a nice composition, picking up more foreground detail in the gravel than the XS Max. 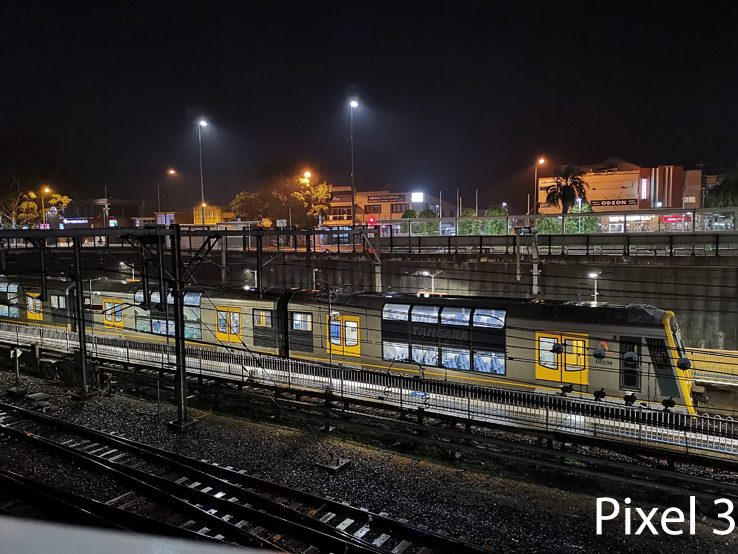 The Pixel 3 mostly handles it nicely, although as is common with many Pixel 3 shots, you're trusting to its AI for overall colour balance, which can lead to some slightly over-saturated tones.

The same bridge that afforded me a (somewhat) protected view of the train station also allowed me to photograph a very wet, very dark road. Again, there are only small levels of difference between each camera's composition of the shot. 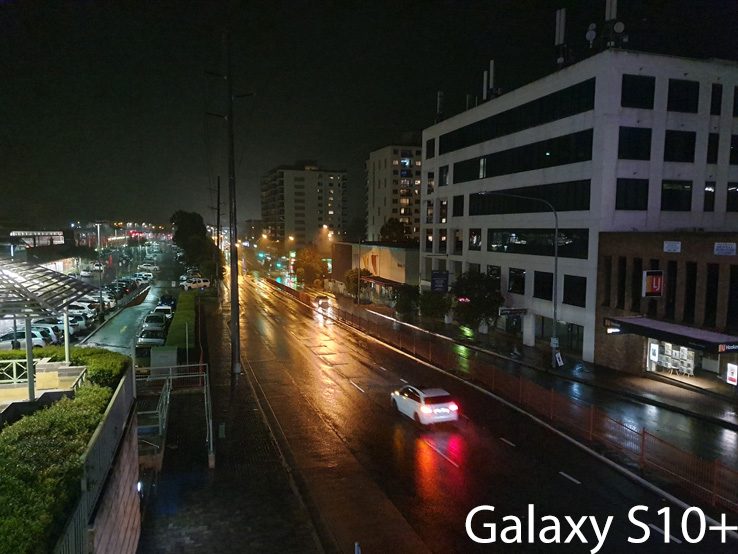 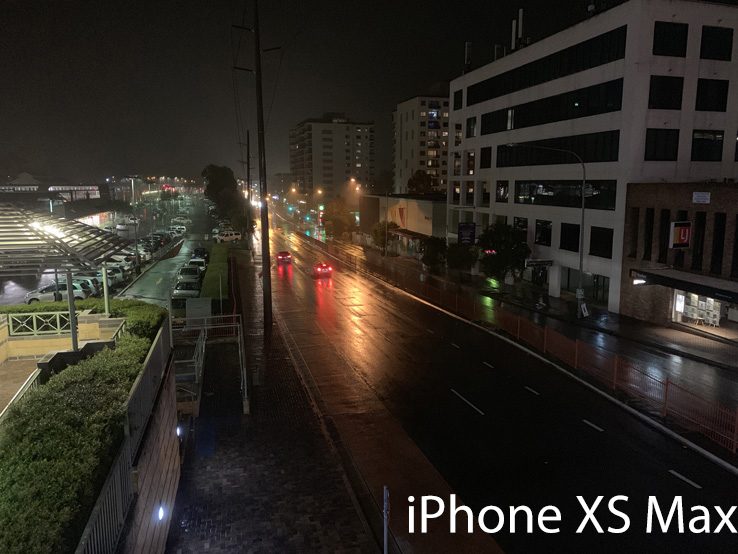 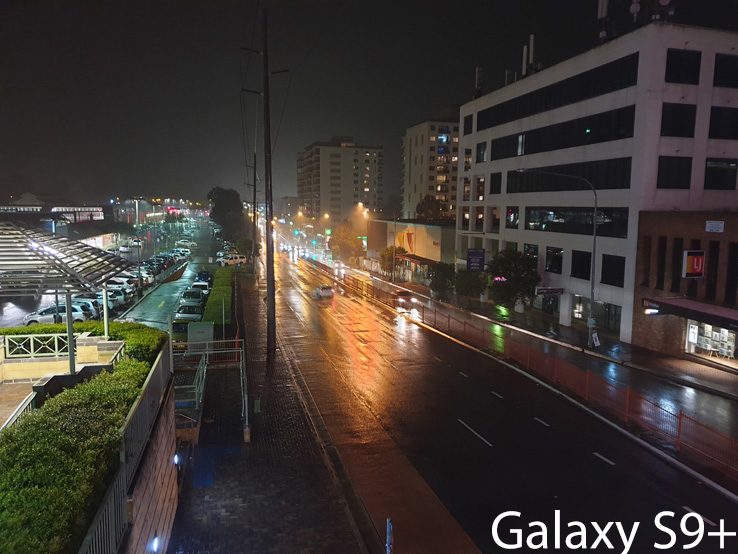 Finally, a local landmark fountain that may, in some bizarre way also be a clock, but only in a certain light. I didn't have that much to begin with, although the rain here did mean there really weren't many people getting in the shot. 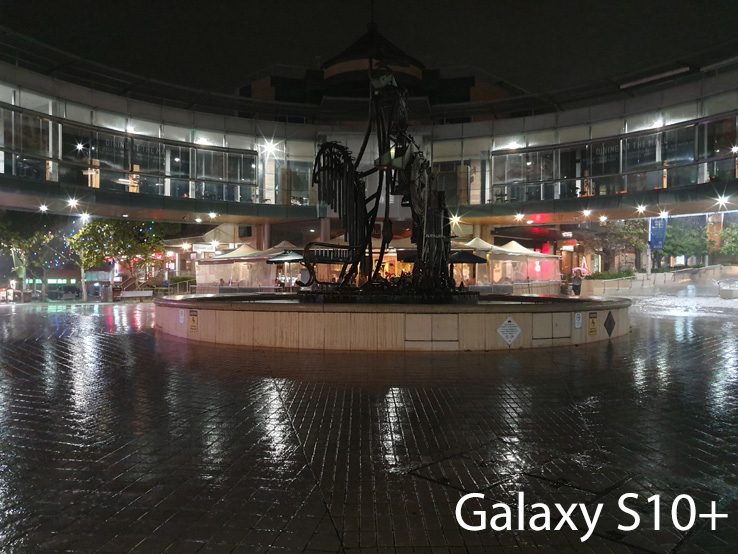 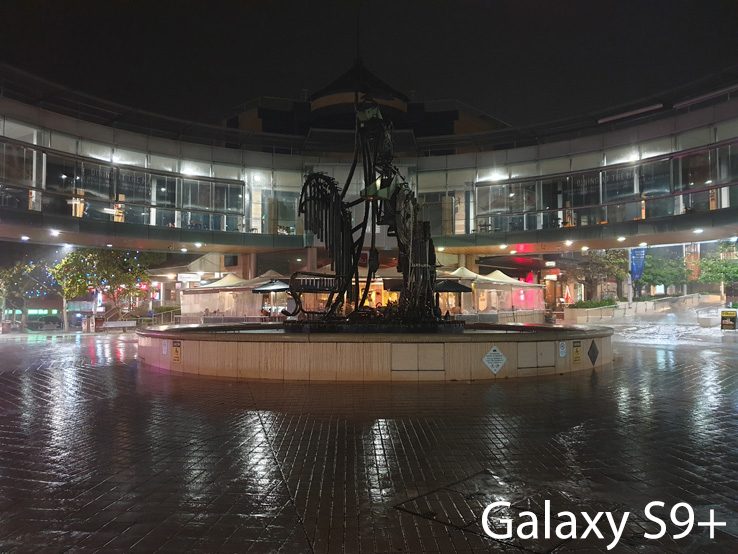 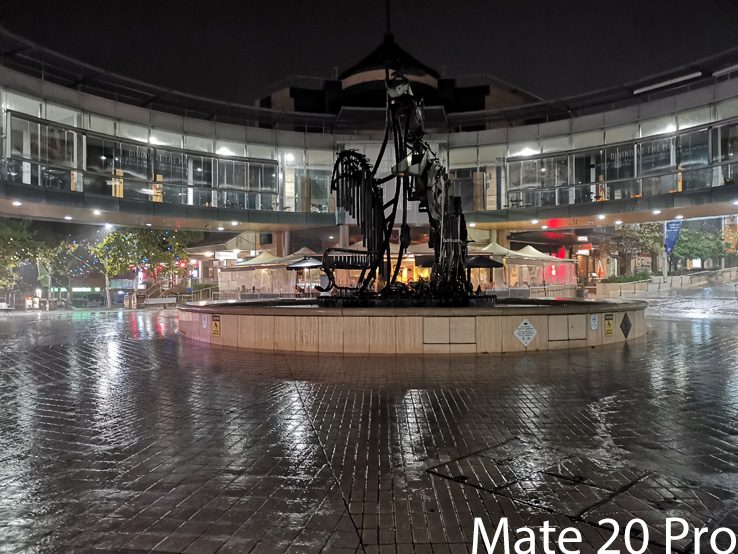 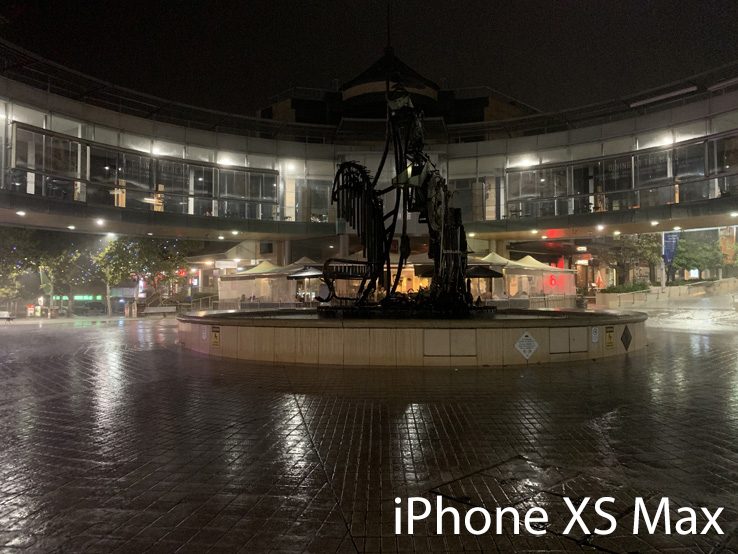 The reality for any flagship phone is that if you've got the time and patience, you can turn out some pretty impressive shots. However, most of us just want to capture the moment and move on, and in low light that can be quite challenging.

Here, the Samsung Galaxy S10+ acquits itself well, with images that stack up very nicely against the already impressive Huawei Mate 20 Pro.

The Pixel 3 gives impressive photos for a single lens camera, but that lack of lens choice is somewhat stifling if you did want a zoom or wide option to speak of, and its night sight features can sometimes oversaturate images.

If you're a Galaxy S9+ owner with a particular passion for photography, the differences between the S9+ and the S10+ are quite stark, but realistically you're still holding a very good camera in your hands, if not quite the best.

The iPhone XS Max provided nice colour in its photos, but it's quite clear that it struggled the most with low light situations. If you're an iOS diehard it's your best option by far, but it's clear that Apple needs to do some serious hardware and software work to truly compete here.