What is Bytecoin (BCN)?

Bytecoin aims to become the number one anonymous alternative to bitcoin.

A guide to Bytecoin
(BCN)

Bitcoin, and most other altcoins, provide better anonymity than transactions with fiat currency (for example, paying with credit cards). Still, with enough analysis, a wallet’s transactions can be tracked. This has led to the creation of Bytecoin, a cryptocurrency with anonymity as its core philosophy.

Bytecoin is a peer-to-peer digital cryptocurrency released in July 2012. Since then, its value has been slowly on the rise, putting it in direct competition with other leading and widely used cryptocurrencies like bitcoin and Ethereum.

For a long time, a more secure and anonymous cryptocurrency has been asked for by the digital currency community. Bytecoin gives users that additional layer of security and anonymity by obfuscating the transaction addresses of senders and recipients of BCN.

How do public transactions and the blockchain work?

The issue a lot of users have is that, if anyone knew Bob’s public wallet address, for example, that person would also know that someone sent Bob 0.01 BTC. Tracking an address in this manner is possible with coins like bitcoin because addresses are public and someone could use services that track these addresses to figure out who’s sending cryptocoins to a particular address.

This openness is both one of the biggest advantages of current cryptocurrencies on the market, and one of their biggest disadvantages.

How is Bytecoin different from bitcoin?

Bytecoin’s highest value comes from advances in the way bitcoin’s blockchain stores transactions and the public addresses of the senders and recipients. Here is the issue that Bytecoin seeks to address, along with the solution:

Many users want to resist blockchain analysis. When one user sends cryptocoins to another, both their addresses are stored on the blockchain as part of a transaction, along with the amount of cryptocurrency sent. The blockchain’s open philosophy then presents a problem: If you know people’s public addresses you can track how many transactions they’re receiving and how much currency they’re getting.

Bytecoin is the solution to this openness of transactions. By wrapping the addresses using a ring signature algorithm called CryptoNote, analysts of transactions and the blockchain would be unable to precisely pinpoint the members involved in a transaction. Because ring signatures are shared by multiple users, one would be able to discern which group of users made a transaction, but not which specific user in that group.

Where can I use BCN?

As of September 2017, some merchants and online service providers have started accepting BCN as payment alongside more common cryptocurrencies, but the vast majority of users are early adopters and traders.

How do I purchase Bytecoin?

Buying Bytecoin works like any other foreign exchange purchase: Buy BCN at a low value and sell it if it gains in value. Starting April 2017 at the low price of US$0.000174/BCN... 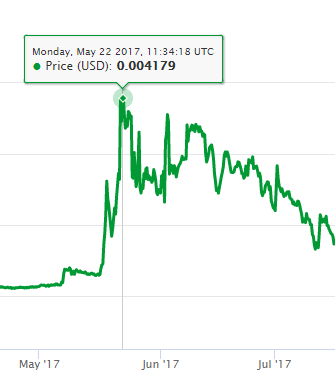 As with other altcoins and bitcoin itself, Bytecoin has since decreased in value and, as of September 2017, its value has settled at approximately US$0.0015, while the market figures out this cryptocurrency’s future.

Just like other altcoins, sending Bytecoin requires both you and the recipient of BCN to own a Bytecoin wallet. Once you have the wallet installed, sending BCN is the same as other altcoins because the algorithm for anonymity works behind the scenes.

How to get Bytecoin

There are already many users holding BCN in their wallets and willing to use it to pay for products and services online. Whether you’re a website developer or a marketing consultant, accepting BCN as payment alongside other cryptocurrencies and fiat currencies like USD costs nothing and gives customers the ability to pay using their preferred method. These Bytecoin assets can then be converted back to fiat currency in online exchanges.

Bytecoin is still young in September 2017, and its value is still undecided. Traders will need to decide whether purchasing Bytecoin is riskier than buying other, more stabilised cryptocurrencies.

What’s next for Bytecoin?

Bytecoin’s roadmap for the future is clear. While work on the anonymity of the cryptocurrency remains at the forefront of the development team’s priorities, Bytecoin aims to introduce more features in the future, including a more lightweight wallet (for smartphones, for example) and a scripting language that allows users to create smart contracts.

What are smart contracts?

Smart contracts are scripted by users on top of the blockchain of a cryptocurrency. They are then automatically fulfilled when the requirements of the contract are met.

Smart contracts can be used, for example, to send an amount of cryptocoins to another user on the first of every month.

Was this content helpful to you?
Thank you for your feedback!
What is BitShares (BTS)? Australia’s first Initial Coin Offering raises $34m